The Culture War in the Tax Code

In honor of this year’s delayed Tax Day on July 15, let’s indulge in a fun hypothetical that illustrates the difficulty of taxing families in a fair, neutral way. 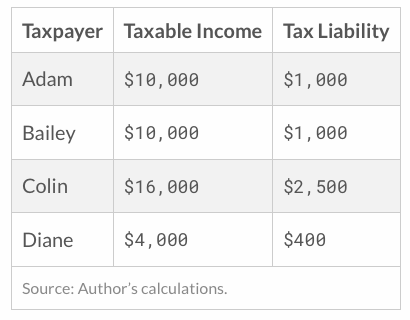 Question: What happens if Adam marries Bailey and Colin marries Diane? This example comes from a recent Tax Foundation report about marriage and the tax code, and it raises an age-old issue.

As individuals, these folks are being taxed fairly, paying higher rates as they make more income so that the government is funded disproportionately by the wealthy. But once they pair up, they form two couples with exactly the same income, $20,000, but very different pre-marriage tax liabilities, $2,000 vs. $2,900.

As a result, the government has to either (A) tax these two couples differently despite their earning the same amount of money or (B) tax one or both couples differently from how they were taxed as individuals, creating a marriage bonus or marriage penalty. There is no way to avoid both problems at once, short of replacing the progressive tax system with a flat tax.

In the current U.S. tax system, tax brackets for married couples are double what they are for singles, at least while the household’s income for the year is below half a million dollars. If our imaginary tax system works the same way, these couples will both pay 10% percent on their first $20,000 in income, which is to say all of their income, and Colin and Diane will see their liability fall $900: a marriage bonus.

Generally speaking, if a high earner marries someone with little or no income, the doubling of tax brackets saves the couple money. But if two people with similar incomes marry, the doubling of tax brackets basically just holds them harmless. And if two high earners marry each other, the fact that their brackets don't double can result in a marriage penalty if they file together.

As the Tax Foundation report explains, there are many more complications that arise when a progressive tax system meets marriage. For instance, imagine that a non-worker decides to start working. If that non-worker is single, he’ll pay a very low tax rate — indeed no tax at all, up to the standard deduction — on much of his income. But if this person is married to someone who already works, the spouse's income has likely already eaten up the standard deduction and maybe some of the lower tax brackets too. The very first dollar the previously non-working spouse makes will be taxed, perhaps at a pretty high rate, discouraging stay-at-home parents from entering the labor force.

More concretely, imagine two more people in the hypothetical tax system above, both of whom are capable of earning $20,000 if they work. As singles, both are taxed $3,500 if they decide to enter the labor force. If they marry and only one person works, however, the doubled tax bracket reduces the worker’s taxes to $2,000, because all of his income is taxed at just 10%; this person thus faces a bigger incentive to work than he would if he were single. If the second person then enters the labor force, though, the bill rises all the way to $7,000 — the lower tax bracket was already used up, so all of the new income gets smacked at 25 percent. Importantly, the final bill is the same as it would be for two working singles, but the marginal benefit of the second person working falls nearly 10%, from $16,500 if they're single to $15,000 if they're married with an already-working spouse.

The complications continue. One is "head of household" filing status, which is available to people who are not married but do support dependents. In terms of deductions and tax brackets, it's basically a middle ground between single and married status. In some ways it makes sense: Why should a single mom pay higher tax rates than a couple with a single income, especially given that the single mom might have to purchase child care from someone outside the household? But on the other hand, giving a special tax break to this category of single people means they have to give it up if they get married.

If your head isn't spinning yet, don't forget that in addition to an income tax, we also have a safety net. When people earn more money of their own, their benefits are taken away, which functions as a sort of tax in its own right. When people get married, their spouses' incomes are factored in, so gaining a spouse can mean losing benefits. Meanwhile, unlike income-tax brackets, safety-net eligibility thresholds often do not double for couples. This means that even if two people are both poor enough to qualify for a program on their own, they might no longer qualify once married.

There are changes we could make to address some of this, but as the Tax Foundation report makes clear, any change will come with tradeoffs and political battles.

We could have a flat tax, but that will increase the burden on the poor while decreasing it on the rich. We could tax everyone as individuals and ignore their marriages, but that would strip stay-at-home parents of a big tax break — and raise the question of whether the safety net should also ignore spouses' incomes. We could end head-of-household status, but that would hurt single parents. We could give secondary earners a special break to counteract the way the current system discourages them from working, but that feels like the government is trying to push stay-at-home parents to work. We could make sure safety-net thresholds double for couples, but that will mean giving benefits to people much farther up the income scale.

Tax experts, including those at the Tax Foundation, are generally of the belief that the tax system should aim to raise money, not to change people's behavior. Unfortunately, that seems unattainable here: The way we answer these questions will necessarily depend on how much we'd like to encourage marriage and work. In this sense, the tax code is basically just another front in the culture war.