Princeton University sociology professor Sara McClanahan summarized the social scientific consensus about the importance of family structure for children with her colleague Gary Sandefur in this passage from their magisterial 1992 book, Growing Up with A Single Parent. In recent years, many other scholars have come to similar conclusions, from Paul Amato at Penn State to Isabel Sawhill at the Brookings Institution to Melanie Wasserman at UCLA. The consensus view has been that children are more likely to flourish in an intact, two-parent family, compared to children in single-parent or stepfamilies.

But this consensus view is now being challenged by a new generation of scholarship and scholars. For instance, sociologist Christina Cross at Harvard University recently published an op-ed in The New York Times entitled, “The Myth of the Two-Parent Home,” that contended “living apart from a biological parent does not carry the same cost for black youths as for their white peers.” In The Times and in another op-ed this month in The Harvard Gazette, she draws on her work indicating that black children are less affected by family structure on a number of educational outcomes to make the argument that family structure is less consequential for black children. In recent years, other family scholars (here and here) have also called into question the idea that children do better in stable two-parent families.

One practical implication of this revisionist line of research is that children may not benefit from having their father in the household. Another implication is that the value of the two-parent family may be markedly different across racial lines, with black children less likely to benefit from such a family. Accordingly, in this Institute for Families Studies research brief, we investigate two questions:

1) Are black children more likely to flourish in an intact, two-parent home compared to black children raised by single-parents or in stepfamilies? We focus on these three subgroups because they are the largest family groups for American children today, including African American children. And we answer this question by looking at three important outcomes: child poverty, college graduation, and incarceration.

2) Is the association between family structure and child outcomes markedly different by race? Here, we focus on comparing white and black children in intact, two-parent families to their peers in non-intact families—single-parent families, stepfamilies, and other families. Our aim is to determine if the association is different for black children compared to white children on the three outcomes noted above.

Today, 37% of black children are living in a home headed by their own two biological parents, 48% are living in a home headed by a single parent, and 4% are living in a stepfamily with one biological parent and one non-biological parent, according to the March 2020 Current Population Survey (CPS).1 In this research brief, we explore how these three family structures are associated with child poverty, college graduation, and incarceration. We draw on data from the American Community Survey (ACS) 2015-2019 Five Year Estimates2  and the National Longitudinal Survey of Youth (1997 cohort). Specifically, NLSY97 follows the lives of a national representative sample of American youth born between 1980 and 1984. The survey started in 1997 when the youth were ages 12 to 17. We used the wave that was surveyed in 2013/2014, when the cohort was at least 28 years old. 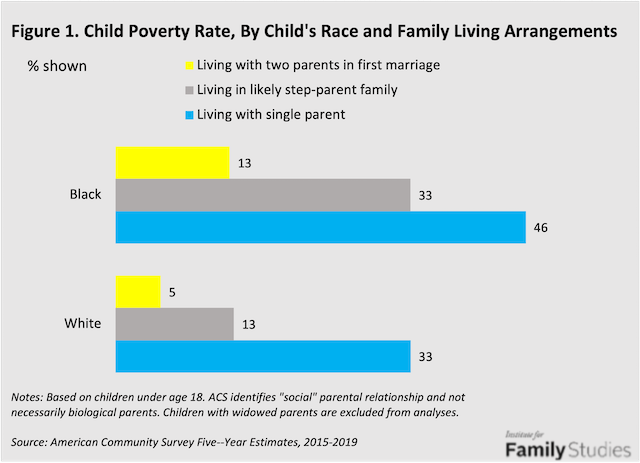 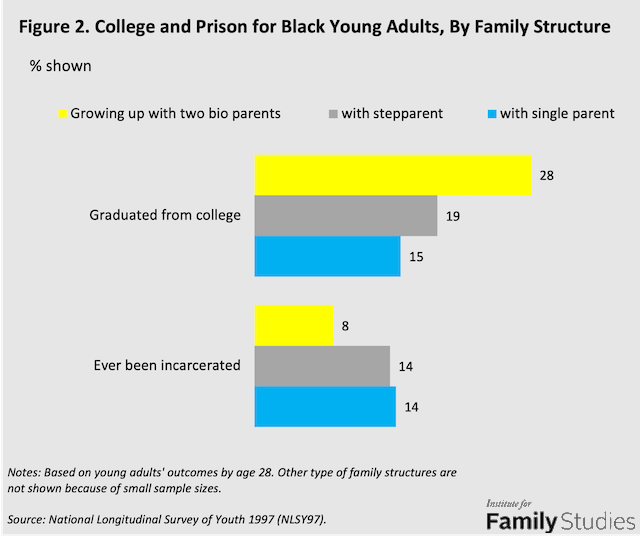 There is also a clear connection between family structure and incarceration for black young adults. Black young adults who grew up in a single-parent home are about 1.8 times more likely to have spent time in prison or jail by their late twenties, compared to their peers from a home headed by two biological parents. Those from stepfamilies are also more likely to have been incarcerated. In a multivariate context with the same controls noted above, young black adults in non-intact homes have about two times the odds of having ever been incarcerated compared to their peers in intact homes. 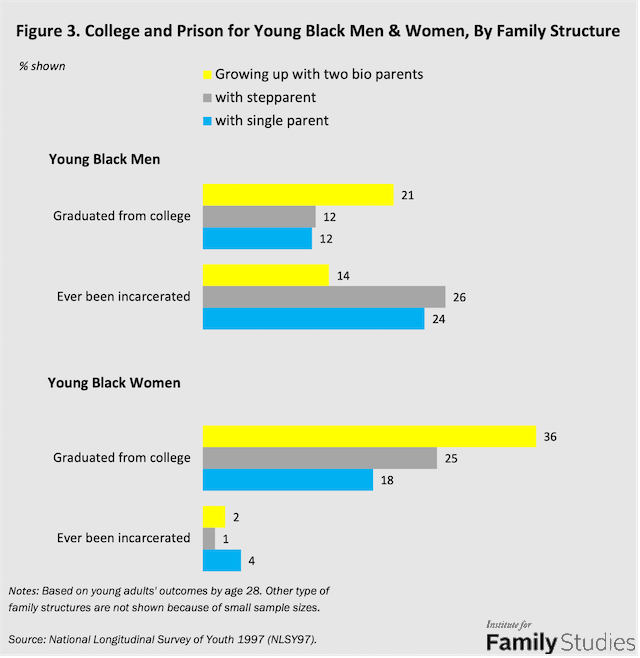 Clearly, there are differences in poverty, college graduation, and incarceration by family structure among African Americans. But are these differences similar or different to the ones for whites? Note that 67% of white children today are in homes headed by their biological parents, 21% of white children are in homes headed by a single parent, and 6% are living with a biological parent and stepparent, according to the March 2020 Current Population Survey. 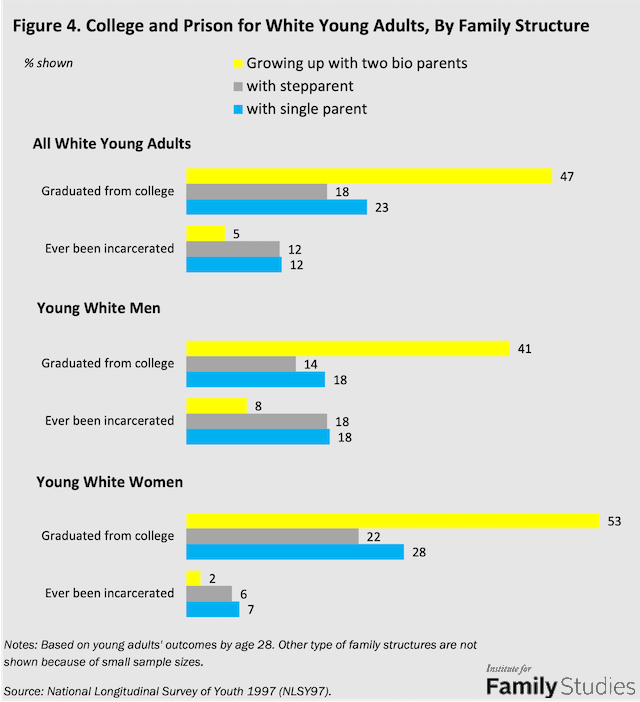 At the same time, it is important to note that the figures also show that whites are more advantaged within each family structure category. For instance, only 28% of black young adults from intact families have graduated from college compared to 47% of white young adults from intact families. This is a large difference and is but one example of the fact that a stable two-parent family is not a panacea when it comes to addressing racial inequalities in America. The nation’s legacy of racial discrimination, unequal access to a quality education, concentrated poverty, and ongoing experiences with racial prejudice are among the structural factors that help explain the racial differences in outcomes this brief finds between blacks and whites who have the same family structure. 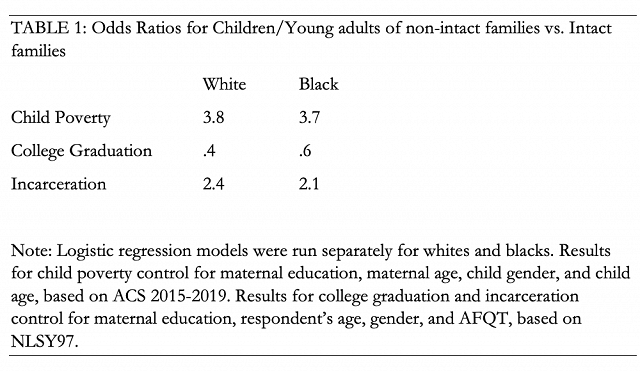 Using new Census data and the National Longitudinal Survey of Youth, this brief finds that black and white children from intact homes are significantly more likely to be flourishing economically, educationally, and socially on the three outcomes examined here: child poverty, education, and incarceration.

At the same time, consistent with Cross’ research, we do find that the association between family structure and one major education outcome, college graduation, is weaker for black children than white children. Nevertheless, young black adults are significantly more likely to graduate from college if they grew up in an intact family.

To be clear, this descriptive brief does not make claims about causality. A number of factors not measured in this brief may confound the associations between family structure and child outcomes documented here. Young adults’ family structure growing up is obviously endogenous to their family income, for instance, given that married parents tend to have a higher income than single parents. Here, progressives tend to minimize the ways that family income is a consequence of family structure (two parents can more easily earn a decent income than one parent) even as conservatives tend to minimize the ways that a stable marriage is a consequence of a decent income (relationships are stronger when they are undergirded by a steady income).

What we can conclude is, consistent with a longstanding social scientific consensus about family structure, children are significantly more likely to avoid poverty and prison, and to graduate from college, if they are raised in an intact two-parent family. This association remains true for both black and white children. In the vast majority of cases, these homes are headed by their own married mother and father.

In sum, it is no “myth” to point out that boys and girls are more likely to flourish today in America if they are raised in a stable, two-parent home. It is simply the truth that white and black children usually do better when raised by their own mother and father, compared to single-parent and stepfamilies. Our results, then, also suggest the fraying fabric of American family life, where more kids grow up apart from one of their two parents—usually their own father—is an “equal opportunity tsunami,” posing obstacles to the healthy development of children from all backgrounds.

The authors would like to thank Samuel McIntyre, Joseph P. Price, Peyton W. Roth, Scott Winship, Jared Wright, and Nicholas Zill for their input and assistance. Any errors are our own.

1. Courtesy of Nicholas Zill, the analysis is based on March 2020 Current Population Survey (CPS). The vast majority of black children in two biological parent families are in families headed by married parents; only a small fraction are in cohabiting families. See: https://ifstudies.org/blog/1-in-2-a-new-estimate-of-the-share-of-children-being-raised-by-married-parents.

3. This includes intact, same-sex families and intact, adoptive families. However, the vast majority of children in intact, married families in the ACS are in intact, heterosexual families. See, for instance, https://ifstudies.org/blog/a-portrait-of-contemporary-family-living-arrangements-for-us-children.

4. For poverty estimates, households were identified as likely “step-parent” families if the parents were married and either parent reported they had been married more than once. Families headed by a single widowed parent were excluded from the analyses. Data were accessed at Steven Ruggles, Sarah Flood, Sophia Foster, Ronald Goeken, Jose Pacas, Megan Schouweiler and Matthew Sobek. IPUMS USA: Version 11.0 [dataset]. Minneapolis, MN: IPUMS, 2021. https://doi.org/10.18128/D010.V11.0.

5. The comparison group is children in single-parent, stepfamilies, and other families not headed by an intact married couple.

6. The vast majority of these families are headed by married biological parents but also include a small number of cohabiting biological parents. See: https://ifstudies.org/blog/1-in-2-a-new-estimate-of-the-share-of-children-being-raised-by-married-parents.

7. The comparison group here is children from single parent, stepfamilies, and other families not headed by two biological parents.