Trends in Unmarried Childbearing Point to a Coming Apart

Late last year in this space, I offered an overview of a report from Senator Mike Lee’s Social Capital Project about the rise of unwed childbearing. Today, two-fifths of children are born to unmarried mothers, a phenomenon the report traced to declining birth rates among married women, rising birth rates among unmarried women, a fall in “shotgun marriages,” and a decline in marriage itself.

On Valentine’s Day, the project released some additional charts breaking the numbers out by race and educational attainment. The simple way to summarize them is this: In terms of race, old disparities have persisted as unmarried childbearing has risen among all groups. In terms of education, by contrast, we are seeing what Charles Murray called “coming apart”: Nothing much has changed for the highly educated, while the less educated are having children out of wedlock at increasing rates.

Below is the main chart on race. About 70% of black children and more than half of Hispanic children are born out of wedlock today. These figures are far higher than they were decades ago and considerably higher than the rates for whites and those of “other” races—but rates for everyone rose over time. 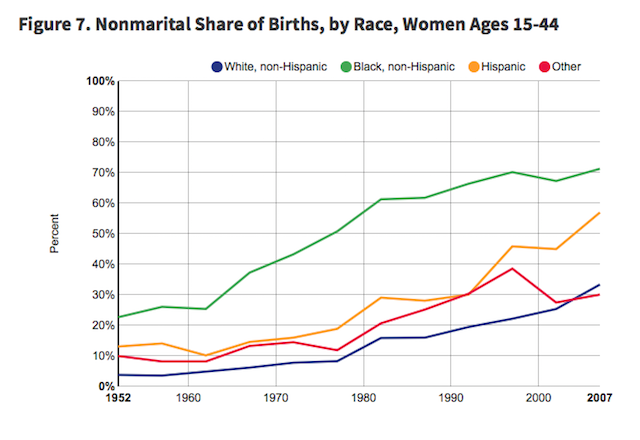 Another striking chart documents the decline of “shotgun marriage” following an unwed pregnancy. Again, there is both a racial disparity and a dramatic trend over time, but all racial groups saw a big change in the same direction. 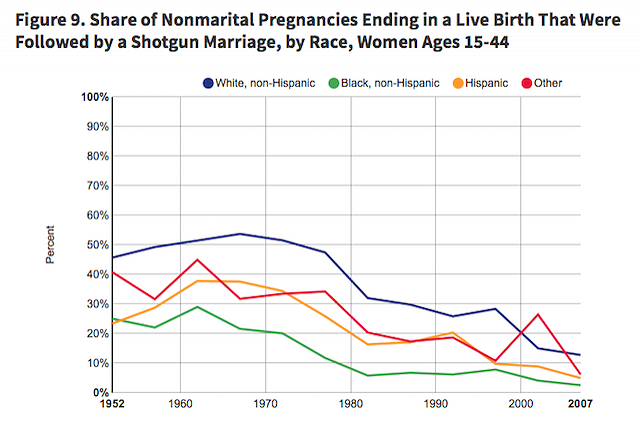 The trend is even more dramatic for women under 30 giving birth for the first time. Shotgun marriage was once the norm for white women in this category; now it’s rare for all groups. 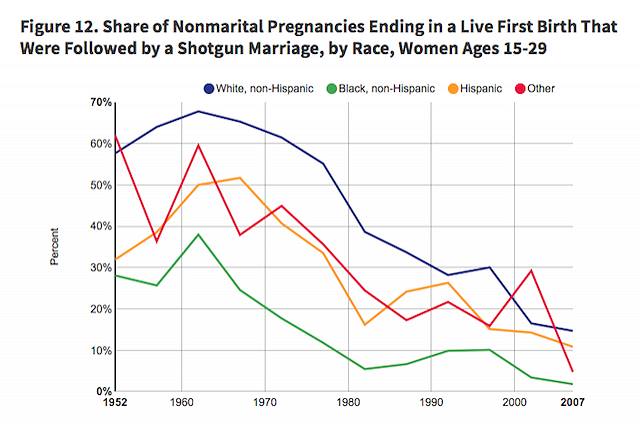 Things look different in terms of education. This is a hard trend to sort out because educational attainment has grown over time—those without a high-school degree, for example, are a highly disadvantaged sliver of today’s population but were quite common half a century ago. To address this issue, the authors "defined three categories of educational attainment in each five-year group, attempting to the extent possible to keep each group the same relative size. That is, ‘low education’ in earlier years corresponds to fewer years of schooling than ‘low education’ in more recent years, but roughly the same share of women is in this group every year."

Here are the overall numbers on the percentage of children born out of wedlock: 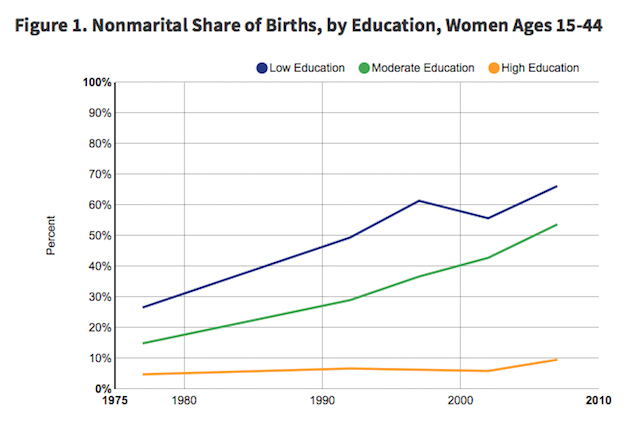 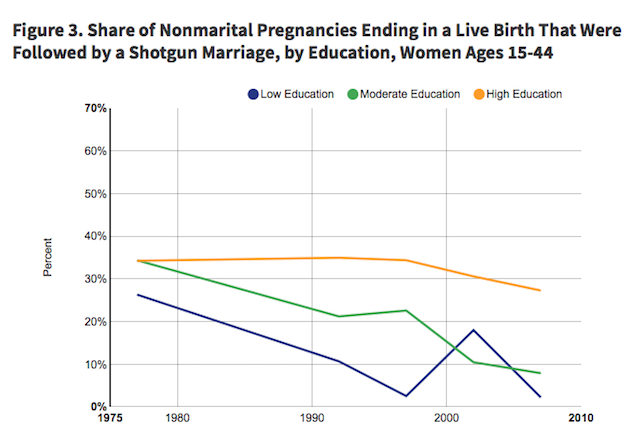 Unfortunately, though, it is not entirely clear what can be done about any of this. “Reviving shotgun marriage would surely do less for children than reversing the growth in nonmarital pregnancy,” the authors write. “At the very least, nonmarital childbearing—and the forces behind its rise—should be of great concern when considering the wellbeing of children.”

Robert VerBruggen is a deputy managing editor of National Review.​​​​​​

Number 8 in 2021: Boys Are Falling Farther and Farther Behind Their Sisters: Should We Care?

Why Some Working-Class Workers Are Quitting