In 1960, nonmarital births were quite rare. Today, about two-fifths of all births are to unmarried women. This resulted from a complicated combination of moral and behavioral changes, and a new report from Senator Mike Lee’s Social Capital Project disentangles them.

Here is the key chart in the report, showing how the numbers would be different if various factors—marital and nonmarital pregnancy, “shotgun” marriage, and marriage itself—had held steady at their early-1960s levels. (The share of births to unwed mothers has leveled off in recent years, so the end of the chart in 2005–2009 is essentially the end of the trend.) 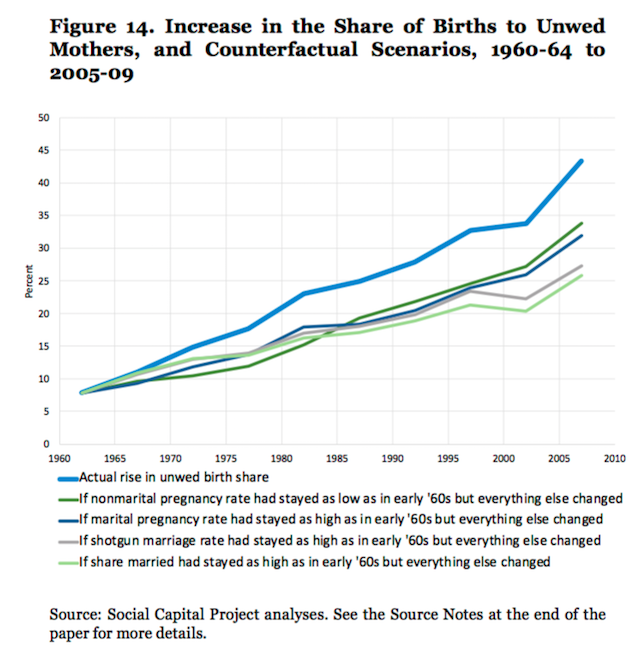 Basically, without any one of these factors, the share of all births that are to unwed mothers would be about 10 to 15 percentage points lower than it actually is. Let’s take them in turn.

The first key fact is that the Sexual Revolution had opposite effects on the childbearing rates of married and unmarried women. Married couples’ fertility rate plummeted by about a third in the 1960s and early 1970s, almost certainly thanks to the introduction of the Pill at the beginning of that period. Married people have always been sexually active, and the Pill allowed them to continue doing what they were doing with a drastically reduced risk of pregnancy if that was what they wanted. Many did—and when the married have fewer kids, the percentage of kids born to the unmarried rises, even if nothing else changes. 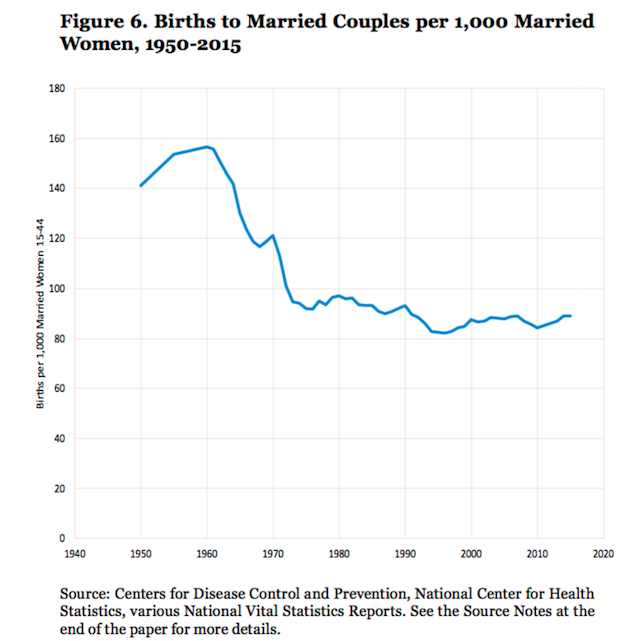 But the unmarried changed their behavior, too. This is a group that had previously limited its sexual activity, out of concern about both unwanted pregnancy and social opprobrium. They had sex earlier and more frequently as they gained access to the Pill and as shifting mores made premarital sex less taboo. Further societal changes made unmarried childbearing, not just sex, more acceptable, such that half of births from nonmarital pregnancies today are intended.

These changes swamped the Pill’s ability to reduce the chance of pregnancy. Births to single mothers, per 1,000 single women in the U.S., more than doubled over this period. 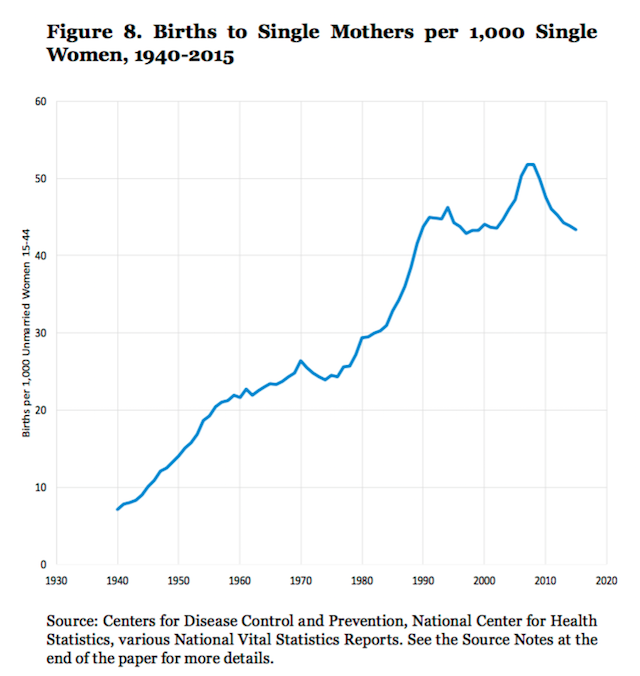 The custom of shotgun marriage—vows taken, out of a sense of obligation, after an accidental pregnancy has occurred—plummeted as well: 43% of unwed pregnancies resulted in a shotgun marriage in the early 1960s; this is down to 9% today. Young couples today simply do not feel the need to marry when a baby enters the picture.

The decline of marriage itself is also a major factor since married people are still far more fertile than unmarried people. About a third of women in their early 30s are unmarried today; this number was below 10% in the 1960s.

One might reasonably ask: Where the heck is abortion in these calculations? The answer is that the report’s authors don’t believe abortion is a major factor in these trends. Abortion did rise in the 1970s, but it fell thereafter, and by all metrics, it is lower today than it was when Roe v. Wade was decided. Measured as a percentage of nonmarital pregnancies it’s down about a third—although this is thrown off by the fact that, as mentioned earlier, more unmarried women are getting pregnant on purpose now. The drop relative to 1973 is modest at best when measured, for example, per 1,000 women of childbearing age.

Also worth considering is another recent study that looked specifically at younger women, and specifically at the period when the Pill and abortion became common. It suggested that while the Pill increased sexual activity, it was abortion that drove up the ages at which women married and had kids. Those ages continued to rise, though, even as abortion began to fall in the 1980s—suggesting that different factors might have been important at different times.

It’s a frustratingly complex picture; and half a century after the Sexual Revolution, with no reversal in sight, these may primarily be academic questions anyway. But if we’re not happy where we are in this regard—and we shouldn’t be, given the harms children have suffered from family breakdown—it can’t hurt to know how we got here.

Robert VerBruggen is a deputy managing editor of National Review.