To say parenting in the pandemic has been difficult undersells the challenge: Struggling to get your kids to pay attention to on-screen lessons. Juggling a seemingly endless array of work- and childcare-related tasks at home. Bickering with your spouse over who should do what. And, above all, worrying about what COVID-19 might do to you, your family, and especially your kids.

There is no question that parenting in the past 18 months has been hard. But the message many in the media have been sending about parenting in the pandemic gives the impression that most parents are miserable and have had it worse than the childless.

Take this headline from The Atlantic: “Parents Are Not Okay.” In the words of the author, Dan Sinker: “We are expected to send our kids off into God knows what, to work our jobs and live our lives like nothing’s wrong, and to hold it all together for months and maybe now for years without ever seeing a way out. This is not okay. Nothing is okay. No parent is okay, and I’m not sure how we come back from this.”

A recent Slate article painted an equally dark portrait with the headline, “I’m Lonely and Friendless Since Becoming a Parent.” The author, a father writing for Slate’s parental advice column, complained that, as his family emerges from the darkest days of COVID-19, they have “had a really, really hard time reestablishing social connections now that we have kids in the mix.”

Stories like these suggest parenthood has been a trap amid COVID, leaving us fathers and mothers miserable and lonely.

These COVID-era articles come on top of a more sustained anti-natalist message that parenthood makes us unhappy and could torpedo your marriage or even the environment. “American parents are miserable: Moms and dads alike face a massive ‘happiness gap’,” said Salon, spotlighting a recent sociological study. NBC News contributed the following piece: “Science proves kids are bad for Earth. Morality suggests we stop having them.” Not to be outdone, the Washington Post ran the headline: “Why Having Children is Bad for Your Marriage.”

There is only one problem with this handwringing: It no longer fits the data.

While it is true that parents once were more likely to report they were less happy than their childless peers, today that is most definitely not true. Recent research by Chris Herbst and James McQuivey suggests the happiness tide has turned in toward parents, especially those who are married.

This finding is also evident in a new YouGov survey, conducted this summer by the Institute for Family Studies and the Wheatley Institution. The survey shows that in the wake of COVID-19, childless Americans are now more likely to report their lives are lonely, and less likely to report they are meaningful and happy. A clear majority of men and women (nearly 60%) ages 18-55 who do not have kids say they are lonely some, most, or all of the time.

Only a minority of their peers with children, 45%, report this kind of loneliness.

Furthermore, this survey provides more evidence, even in the pandemic, that parents are generally happier than non-parents. The survey finds that 82% of parents are “very happy” or “pretty happy” compared to 68% of the childless. In fact, childless men and women are also more likely than parents to say their lives are sad most of or all the time. 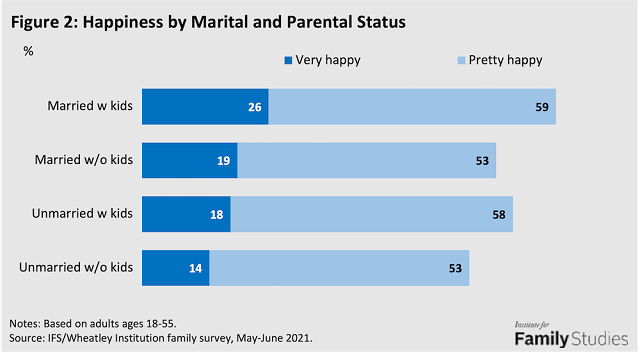 Finally, the survey indicates that married parents did better than their childless peers who are married on most of these outcomes. For instance, 84% of married parents are very or pretty happy, compared to just 72% of their married peers without children.

Parenthood itself also is linked to greater happiness, regardless of marital status of parents. Even among unmarried adults ages 18-55, those with children seem to be happier than those who do not.

Earlier research using data from the early 2000s showed that parenthood in the U.S. was negatively associated with happiness. Fast forward to 2021, and what we see is that in the middle of a pandemic this pattern appears to have reversed. In other words, today men and women in their prime who have children, especially those who are married and have children, report the greatest happiness and the most meaning in their lives.

Katherine, a married mother of two children in Virginia, gives us insight into why this is the case. On the one hand, she acknowledges she had more free time and more opportunities to do fun things — from window shopping to eating out at “fancier restaurants” to following her favorite bloggers — when she was childless. Today, her “life is harder now that I have kids.” A crying baby, dirty kitchen or toddler tantrum disrupt her day on a regular basis. Worries about her kids’ safety have also been emotionally taxing. The care and attention her two young kids require each day have forced her to “really die to myself and become selfless.”

But, she insists, this death-to-self has given way to a newer, fuller life.

“I do find a lot of purpose and meaning in the mundane day-to-day (activities of family) life, as well as the more exciting times when my kids hit certain milestones or when you have a really great moment with one of them,” observed Katherine, who is also a teacher. Compared to her single self, she is less lonely and has fewer “moments of sadness.”

Her happiness with life is “fuller because it’s shared with my husband and kids,” as well as other friends and family members. Her ties with her own parents and in-laws have deepened as they are “able to talk and relate and bond over the children.”

Finally, motherhood enabled her to plug into a mother’s group at her local church, which has left her feeling more connected to her religious community. For Katherine, it is true that the move to motherhood has required sacrifice and stress. So far, the narrative in our culture tracks with her experience.

But motherhood has also made her feeling more compassionate, charitable and connected. “I think there’s a deeper fulfillment there,” she said. This is where today’s dominant narrative falls apart. And judging by the YouGov survey, Katherine is no outlier in reporting more happiness today as a 30-something mother than she would have as a childless young adult.

Her comments are also reflective of the research on the new happiness gap between parents and the childless. Not only do parents, especially married ones, often enjoy a greater sense of meaning and solidarity in their homes, they also seem to be forging deeper connections to others outside of the home, especially in a world where so many of our social ties have shriveled in the face of anti-social lockdowns, polarization and enticing electronic alternatives to in-person activities.

Indeed, scholar Chris Herbst believes the “steady erosion in Americans’ social and civic connectedness” has been lowest for mothers and fathers. Everything from church youth groups to travel soccer to PTOs today seem more likely to bind parents to other real people in real life. Given the importance of these ties for our social and emotional health, not to mention the sense of solidarity and meaning found in many if not all families, it is no surprise that parents like Katherine are reporting higher levels of happiness.

In 1947, Winston Churchill told Parliament, “It has been said that democracy is the worst form of government except all the others that have been tried.” Much the same could be said about family life today. The struggles, the stresses and the heartbreak of being married and raising children can make it feel like family life is the “worst form” of life. But, at least compared to peers living outside of families, Americans in families are markedly less lonely, and living more meaningful and joyful lives.

Editor's Note: This post appeared first at The Deseret News and has been reprinted here with permission.