Are U.S. Parents Becoming Happier? An Interview with Chris Herbst

by The Editors
Back to Blog

A vast body of research indicates that parents, especially American parents, are less happy, on average, than non-parents. In fact, a Council on Contemporary Families study published last year found that U.S. parents experienced the largest parent-happiness gap out of 22 countries. But in a recent study published in the journal, Review of Economics of the Household, Chris Herbst and John Ifcher challenge the assumption that the "parent-happiness deficit" is settled science by analyzing trends in parental happiness over time for U.S. parents with children at home.

Arizona State University Professor Chris Herbst, who co-authored the study, discussed the findings with IFS (note: the following interview has been edited for clarity).

IFS: Previous studies have documented a parent-happiness gap, where parents report being less happy than non-parents. But you and your co-author reviewed this literature and found several flaws. Give us a few examples of the problems you discovered.

Chris Herbst: Our literature review uncovered two main concerns. First, to study the relationship between parental status and happiness, researchers generally analyze datasets that are comprised of random samples of individuals over a 20- to 30-year period. Doing so provides an estimate of the average happiness gap between parents and non-parents over the entire observation period. Implicit in this empirical framework is that the parental happiness gap remains constant over time. If, however, parents and non-parents are following different happiness trends over time, then previous research potentially mischaracterizes the nature and extent of contemporary happiness differences between these groups.

Second, previous studies generally define a parent as anyone who reports having children in response to questions similar to the following: ‘‘How many children have you ever had? Please count all that were born alive at any time (including any you had from a previous marriage)?’’ This definition commingles noncustodial parents and empty nesters with parents who are actively parenting and also commingles adoptive and step-parents with non-parents. In other words, we felt there was too little nuance and texture to the definitions used in previous studies. There is no one-size-fits-all definition and experience of parenting, yet most prior studies tended to define parents in this manner.

IFS: So instead, you focused on “active parenting” rather than just anyone who has ever had a child?

CH: That’s right. The definition of parent used in our study is any respondent who reports having children ages 0 to 17 residing in the household. As I alluded to earlier, most prior studies do not make a distinction between parents with and without the presence of children residing in the household. Thus, our work attempts to understand the happiness of those who are likely to be actively engaged in parenting.

One downside to our more restrictive definition of parents is that a number of interesting groups are defined as being non-parents, including parents with children ages 18 and over, and parents whose children do not live in their household.

IFS: One of the study’s most interesting findings is that non-parents’ happiness is decreasing, while parents’ relative happiness is increasing over time. Tell us more about that finding.

CH: Our analysis of the trend in happiness for parents and non-parents revealed two interesting results. First, over past few decades, the happiness of parents has not changed much. That is, parents today are about as happy as they were several decades ago. Conversely, non-parents have witnessed a sizeable reduction in their happiness; they are less happy today than they were several decades ago. Second, when you put those individual trends together, one interpretation is that parents have become relatively happier over time.

A related finding is that, up until the mid-1990s, non-parents were happier than parents. But starting in the mid- to late-1990s, the fortunes of parents and non-parents suddenly flipped, with parents reporting that they were happier. This difference persists, and becomes even larger, throughout the remaining years in our datasets. Thus, the happiness gap in favor of parents is a relatively recent phenomenon. These results also confirmed our concern that estimating a single happiness gap over a 30-year period may potentially hide or mischaracterize changes in the well-being gap over time. 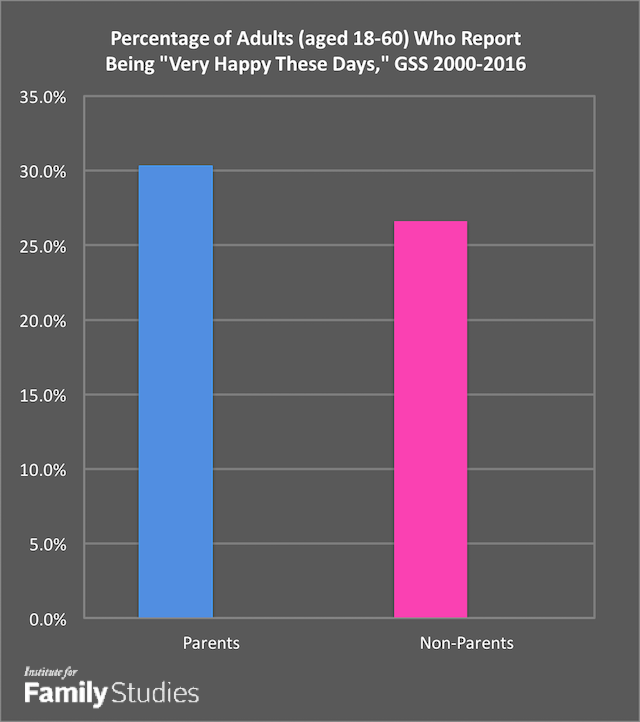 IFS. What else can you tell us about the decrease in non-parents’ happiness compared to parents?

CH: One of the striking things about the absolute decline in happiness among non-parents is its pervasiveness: the reduction applies to men and women, the working and non-working, whites and non-whites, and the low- and highly-educated. This implies that whatever is eating away at the well-being of non-parents is quite broad-based in its reach.

Consistent with this hypothesis, we find that non-parents have witnessed relative reductions in a wide range of alternative measures of subjective well-being. For example, we find that non-parents perceive their financial situations to be deteriorating relative to parents. They have also become more likely to express regrets about their lives, more likely to want to alter their lives, and less likely to be confident.

We find evidence in favor of the widespread, steady erosion in Americans’ social and civic connectedness, interpersonal trust, and economic security. Across almost every measure, however, the reduction has been substantially less dramatic among parents. Parents over time have become relatively more likely to visit friends, to get the news every day, and to remain engaged in politics. And these relative improvements apply to the economic realm as well: Parents are increasingly likely, relative to non-parents, to agree that ‘‘family income is high enough to satisfy nearly all important desires,’’ and perhaps because of this, have become less likely to confide that ‘‘our family is too heavily in debt.’’

IFS: Every study has limitations—what were some of the limitations in your study that might have impacted your results?

CH: The major limitation is that we cannot pinpoint the causal effect of having kids on adults’ happiness. Individuals choose to have kids (or not) for a variety of reasons—and it could be the case that any preexisting differences in happiness are being attributed to those who ultimately choose (and do not choose) to have kids.

Another limitation that arises when you study changes in an outcome for statically-defined groups over a long period is that there may be compositional shifts in who becomes a parent, which may ultimately drive the observed relative increases in parental happiness observed in this paper. In other words, it is not the impact of parental status on happiness that has changed over time; rather it is that parents themselves are different. For example, if adults feel freer now than before to choose to not be a parent, then the observed relative increase in parental happiness might be due to better sorting of adults into parents and non-parents. Thus, we cannot discount the possibility that compositional shifts among parents and non-parents have driven the change in parental happiness.