America is a big country, and an increasingly diverse one at that. We differ by ethnicity, race, religion, and worldview. This diversity extends to how we educate, socialize, and care for our children—including our infants and toddlers. When it comes to caring for young children, some parents prefer to rely on a stay-at-home parent, others day care, others grandma and still others a mix of these arrangements.

Unfortunately, the American Families Plan that President Joe Biden put forward to help parents did not take account of this diversity. Although we applaud his plan’s support for a child allowance, which would give parents the choice about how to best use a monthly child allowance of $300 to raise their young kids, the president is also pushing a massive expansion of federal spending for child care. His plan would spend $225 billion on an effort to get more young children into day care, thereby creating a powerful public policy incentive in favor of just one way of caring for our youngest kids: relying on center care.

Biden’s plan thereby ignores the diverse perspectives of parents like Andrea Nunez, a 25-year-old mother in St. Petersburg, Florida. “Both grandmas lived nearby and took turns caring for our daughter,” she said. “It’s great having someone you trust knowing that she is going to be in good hands.”

Nunez preferred family care to day care because “when they are a baby, it is harder to trust a child care worker, because they have other kids they are looking after not just ours. But being with a grandparent, they will get the attention, love and care that a baby needs.” 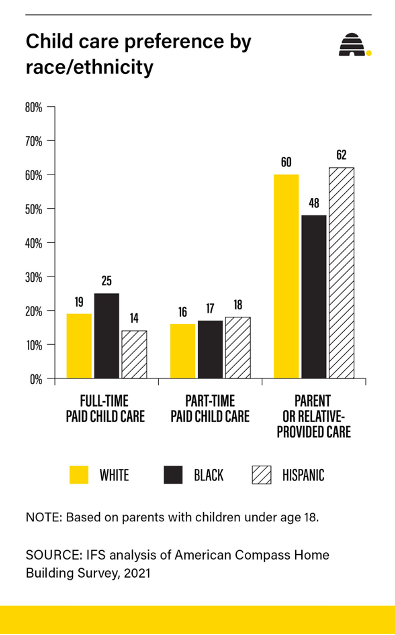 This orientation to care for the young within the family is rooted in part in “Hispanic familism.” This is the idea that men and women should prioritize the needs of the family over the desires of individuals. Hispanic familism is “associated with the belief that children are essential for happiness, which may change the calculus that Hispanic parents (and other relatives) have about the relative value of caring for children versus working outside the home,” as the Institute for Family Studies notes. This familistic orientation also helps explain why Hispanics are more likely to live close to their extended family, either in the same residence or geographically nearby, so as to enjoy stronger bonds between children, parents, grandparents, as well as aunts, uncles and cousins.

“We were lucky enough to have both of our parents nearby,” Nunez reports, adding, “and we did not move partly because we had their help.”

But this more familistic way of caring for kids apparently was not an important priority for the White House when the president was assembling his American Families Plan. “We want parents to be in the workforce, especially mothers,” said Susan Rice, head of the Domestic Policy Council. Like many highly educated professionals, Rice seems to take what was recently described in The Atlantic as a “workist” approach to life. This is an approach that assumes that work is what furnishes our lives with an unparalleled measure of meaning, status and happiness.

It’s no accident, then, when we look at the survey data, that it is highly educated parents who are the ones most likely to prefer paid child care and use it. In fact, highly educated and affluent parents are almost twice as likely to use center-based care compared to poor and working-class parents, and parents without a college degree. 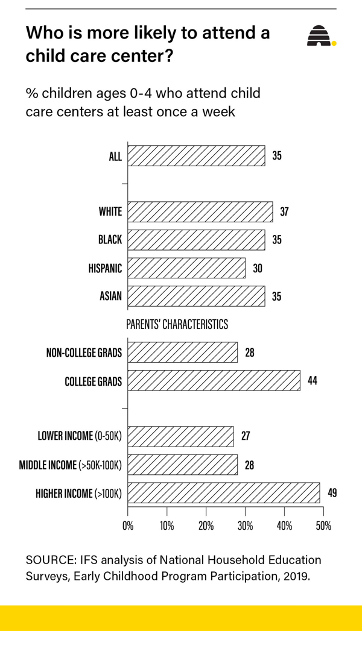 By contrast, not only Hispanics, but also Americans without a college degree are much more likely to rely on family care for their young children — and to prefer raising their kids that way. Given the benefits of family care for young kids, especially in their first year, we hope that the Biden administration can work with Congress to come up with a compromise plan that would increase government support for families struggling to afford and raise children without favoring just one option, the day care option.

Sen. Mitt Romney, R-Utah, has spoken to the president about finding common ground this summer when Congress takes up Biden’s plan. Because Romney’s American Family Security Act offers a child allowance that is more generous than Biden’s plan, and does not favor just one group of parents, we hope that it can be the basis for a compromise plan that passes Congress later this year. Romney’s plan would give families $350 per month for each child under 6 while giving parents flexibility in deciding how they use that money to care for their children. They could use the money for day care, a stay-at-home parent, grandma, a nearby relative or some other option.

Choices regarding how to best raise your own young children are a fundamental expression of the pluralism of contemporary American family life. Given that, and given that Hispanics, who comprise America’s largest ethnic/racial minority prefer family care over day care for their own young children, public policy should aim at giving parents more choices, rather than just subsidizing the day care option to the tune of $225 billion. That’s why we hope President Biden and Congress will honor the diverse ways that families care for children as they forge a family plan this summer.

Margarita Mooney Suarez is associate professor at Princeton Theological Seminary and coauthor of “Familia Si, Guarderia No: Hispanics Least Likely to Prefer and Use Paid Child Care.” W. Bradford Wilcox, professor of sociology at the University of Virginia, is senior fellow at the Institute for Family Studies and visiting scholar at the American Enterprise Institute.

Editor's Note: This article appeared first at The Deseret News. It is reprinted here with permission.

Why Working-Class Parents Don't Buy What D.C. is Selling

How Can China Avoid Demographic Disaster? Return to Religion