by Jenet Erickson Katharine B. Stevens, @kbstevens
Back to Blog

Editor's Note: Continuing with our family policy symposium this week, Jenet Erickson of The Wheatley Institution and Katharine Stevens of AEI explore the research on government-subsidized child care and child well-being.

Emphasizing a “caregiving crisis” caused by inadequate access to affordable care for children under age five, the Biden campaign highlighted a universal child care plan that aims to “cultivate the potential of young children” through high-quality early learning, while enabling their mothers to work. And now-President Biden’s “American Rescue Plan,” announced last week, suggests that a big scale-up of federal child care spending is indeed a top administration priority—a “win-win-win,” as Senator Elizabeth Warren has described it, supporting young children’s development, advancing women’s careers, and boosting the economy, all at the same time.

Universal child care would clearly enable women to earn more income and pursue careers. Mothers’ increased participation in the labor force would raise GDP. But is it good for children in general?

When Quebec, Canada, launched its universal child care program in 1997, they believed the answer was yes: ensuring a “healthy start” for all children through high-quality early care and education, while simultaneously enabling larger numbers of mothers to join the workforce. Women’s workforce participation did increase significantly as a result of the program, rising from 74% in 1997 to 87% by 2018. As it turned out, though, this came at a cost to the well-being of Quebec’s children.

Years of emotional and behavioral assessments collected on children who had attended child care after the launch of Quebec’s universal child care program indicated cause for concern. On average, 2- to 4-year-old children who had been in child care showed significant increases in anxiety, aggression, and hyperactivity, and experienced more hostile, inconsistent parenting and lower-quality parent-child relationships compared to children who had not attended. As children grew older, these negative outcomes did not dissipate: among 5- to 9-year-olds, the social-emotional problems not only persisted, but in some cases increased, particularly for boys with the most elevated behavioral problems.

Follow-up studies conducted 20 years after the program’s inception further revealed that negative social-emotional outcomes associated with attending child care persisted through adolescence and into young adulthood. Among young people from ages 12 to 20, self-reported health and life satisfaction decreased significantly. The scale-up of universal child care in Quebec was also associated with a subsequent “sharp and contemporaneous increase in criminal behavior” across Quebec, as the rate of crime conviction jumped 22 percent. As the following figure indicates, though crime rates in Quebec are lower than the rest of Canada, there was a significant increase in crime accusation and conviction rates for cohorts exposed to the child care program. 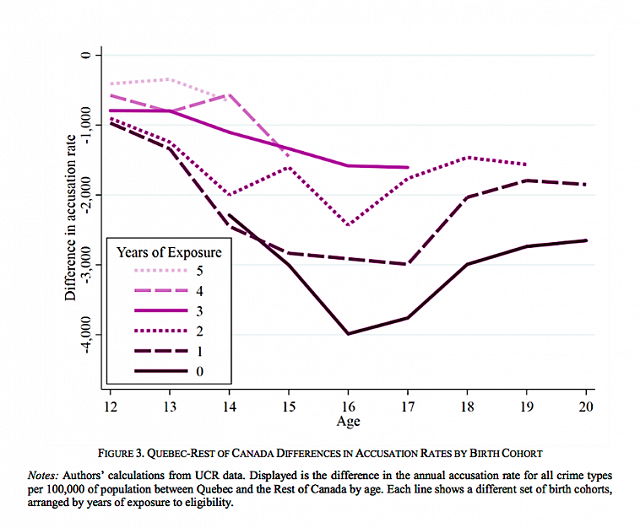 In the United States, the National Institute of Child Health and Human Development Study of Early Child Care (NICHD-SECC)—a longitudinal investigation following a group of 1,364 children from birth onwards—yielded findings that have also raised concerns. Although some of the study’s evidence showed that high quality child care increased children’s basic academic skills at kindergarten entry, extensive hours in a child care program during infancy and toddlerhood predicted negative social-emotional outcomes into adolescence.

By age four-and-a-half, children who had spent more than 30 hours per week in child care had, on average, worse outcomes in every area of social-emotional development—weaker social competence, more behavior problems, and greater conflict with adults—at rates three times higher than their peers. Just 2% of children who averaged less than 10 hours per week exhibited behavioral problems, compared to 18% of those who averaged 30 hours or more and 24% of those who averaged 45 hours or more per week. The negative effects associated with extensive hours in child care rivaled the effects of poverty. Family income, maternal education, child care quality, and quality of the child’s relationship with the caregiver had no impact on those effects (see figure below). 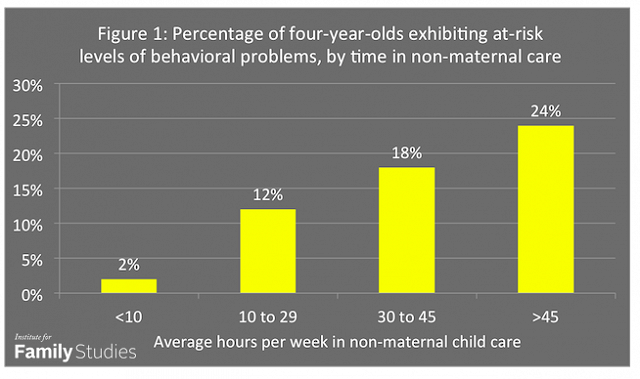 The number of hours spent in child care continued to predict negative social-emotional outcomes into the third and sixth grades: at both points, children who had experienced at least 30 hours per week of non-parental care were rated by teachers as having worse social skills and poorer work habits. Children who had spent more time in center-based—rather than home-based—child care had the highest rates of behavior problems and conflict with teachers. By age 15, the link between hours in child care and problem behaviors was still nearly the same as it had been at age four-and-a-half: adolescents from both high- and low socioeconomic backgrounds who had spent more than 30 hours per week in any type of paid care before age four-and-a-half had higher average rates of risk-taking behaviors such as alcohol, tobacco, and drug use, stealing or harming property, and participating in unsafe activities

What might have caused these effects? A fairly new body of research comparing children’s stress levels in child care and at home sheds new light on that question. Researchers assess children’s stress levels in both environments by measuring salivary levels of the stress hormone cortisol, produced by the hypothalamus-pituitary-adrenal (HPA) system in response to psychological or physical stress. A growing number of studies (see here and here) have found that some children’s stress levels increase significantly when they are in child care—especially full-time, center-based care—indicated by persistently elevated cortisol levels when in the child care setting, specifically. When at home, their cortisol levels return to normal.

Children are “hardwired” to develop within a small group of familiar people and require one-on-one nurturing relationships to develop well; for most of human history, in fact, children’s early development unfolded in the home, usually with full-time maternal care. The much bigger groups and more chaotic conditions characteristic of child care settings compared to home and family environments may cause elevated stress levels among some children. The effect of this phenomenon is not precisely known. But persistently elevated stress during early childhood has been established as a risk factor for adverse developmental outcomes, including disruptive behavior.

What Parents Prefer and Children Need

Parents themselves perceive that young children benefit by being cared for at home. A major survey of parents with children aged 5 or under, conducted by Public Agenda in 2000, found that a high-quality childcare center was the “least preferred” arrangement for almost half (46%) of parents surveyed. Four out of five of parents said that young children were less likely to get sufficient affection and attention from caring, well-trained professionals in a high-quality center than they would at home.

Parents overwhelmingly said they preferred parental care for their young children. Nine out of 10 said that if a family can afford it, it is almost always best for young children if one parent stays home with them full time; more than one-third said that for children under age 2 it is “absolutely essential.” Eighty percent of mothers and half of fathers said they would prefer to stay home themselves to care for their young children rather than work full time outside the home. Polls by Pew and Gallup have yielded similar responses, even for parents of older children.

A surge of findings from neurobiological research has shown that the ongoing, nurturing interactions occurring within young children’s one-on-one relationships with their parents or other primary caregiver literally shape the rapidly growing brain, with powerful, enduring effects on all domains of development. Yet universal child care increases parental workforce participation by decreasing parenting—which is incompatible both with what parents want and what evidence tells us is generally best for young children.

Government policy should focus on strengthening the close, familial bonds essential to children’s healthy development. Federally-funded programs such as Medicaid and the Special Supplemental Nutrition Program for Women, Infants, and Children (WIC) already provide services to large proportions of low-income mothers—and some fathers—during pregnancy and the first years of their child’s life—the period when parents’ understanding of the importance of responsive, nurturing interactions with their developing child is especially crucial. Although greatly underutilized, these existing programs provide significant untapped opportunities for interventions focused on strengthening the core developmental relationships between parents and their young children.

Rather than seeking to outsource young children’s care to paid professionals, policy should aim to better enable parents to spend more time caring for their young children themselves, especially in the critical first five years of life. As a starting point, some existing government-funded services and supports could potentially be redesigned to more effectively help families with young children provide the care they think best supports their child’s development.

One approach proposed in a new paper by Katharine Stevens and Matt Weidinger from the American Enterprise Institute is to increase flexibility of the federal Child Tax Credit (CTC) to expand parents’ options in caring for their young children. Currently, the CTC provides up to $2,000 per year to assist parents with the costs of raising a child over the first 17 years, promising a lifetime total of up to $34,000 of taxpayer support for each child. But the CTC’s design unnecessarily limits parents’ ability to concentrate the funds in their children’s crucial, first years when many families need those resources the most.

Alternatively, Stevens and Weidinger propose a “Flexible CTC”: giving parents the option to pull up to $30,000 of already-promised future CTC payments into any or all of the first five years of the child’s life, up to a maximum of $15,000 per year. Because eligibility for the CTC is contingent on prior-year work earnings, the Flexible CTC would offer limited assistance to families with no work income. But a family of four with two children and an annual income as low as $36,000 could claim the maximum Flexible CTC, so it would help many lower-income families. And since this approach adds no new federal spending, instead just permitting a shift in the timing of an existing tax benefit, it is fiscally responsible for future generations.

Current federal funding helps lower- and middle-income parents balance the competing demands of work and raising their young children solely by subsidizing nonparental care. And, as Katharine explained last week, the Biden administration is now poised to greatly amplify that approach. Instead, our focus should be on strategies to elevate—rather than displace—the crucial role of parents in raising their own children, especially during the first, foundational years of development.

Jenet Erickson is a Research Fellow of The Wheatley Institution, and Katharine B. Stevens is a scholar at the American Enterprise Institute, focusing on early childhood development and learning.