Kate and I celebrated our 35th wedding anniversary last summer. Today, we are both deeply contented and secure in our marriage. Yet we remain ever watchful. It’s all too easy to drift and lose connection. Back in our earliest years, soon after our first two children were born, we did exactly that. Kate was a natural and instinctive mum. Although deeply involved and besotted by my young daughters, I very gradually backed off and let Kate run the show at home. I stopped taking the initiative; we became the stereotyped homemaker and provider, and we stopped being friends. My neglected wife began to micromanage me, and it grated on both of us. We did the classic thing of drifting apart.

We have talked a lot about this over the years. We are both convinced that if we hadn’t been married, we would not have had the motivation to make the changes we needed to recover from this nosedive. Because we were married, we became very intentional about our life as a couple and as parents. The result is that we did make it work. Our first two children were brought up with both parents around. And we went on to have four more children who wouldn’t have existed otherwise. Life without them is unimaginable.

I realize our story is more extreme than most and there’s a strong ‘there but for the grace of God’ element to our recovery. But all relationships go through tough times. We are all human beings, and we all have tough patches where we are not much fun to be around. My view is that a clear and unambiguous view of a shared future together is essential if we are to negotiate these difficult times. I think the act of marriage has these ingredients by default. It may not be a panacea: people still mess up and divorce. But it stacks the odds in our favor. All other things being equal, marriages tend to be a lot more stable than unmarried relationships.

At Marriage Foundation in the UK, we asked the polling company Savanta ComRes to survey 2,000 ever-married adults over age 30. We asked them, thinking specifically of your first marriage, suppose you had stayed unmarried instead of marrying, do you think you would still be together or as happy you are now? The results were weighted to represent the UK population. The full research brief can be downloaded here.

Among those who survived their first three years of marriage, 37% said they wouldn’t have made it that far had they not been married. Among those still married at five years, 34% said marriage kept them together. By 10 years of marriage, it was still 30% who credited being married with their still being together. 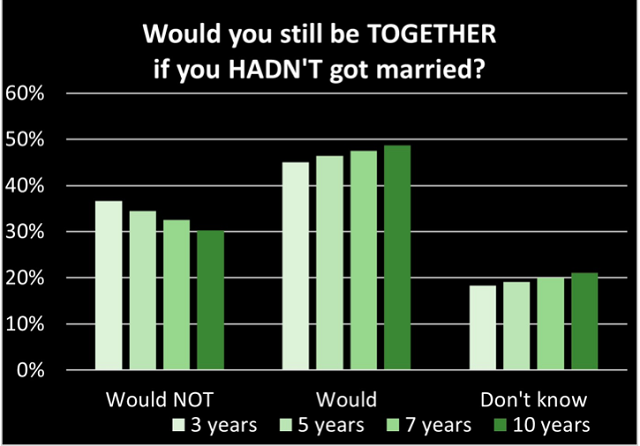 For happiness, the equivalent figures went from 28% in the first three years to 25% for those still together after 10 years. Around one in five didn’t know whether or not they would have stayed together, and one in four didn’t know if they would still be as happy over these timeframes. So, it works out that just under half of all adults didn’t credit being married with still being with their spouse.

In the absence of a counterfactual, there’s no way of knowing for sure whether marriage really did make the difference that one in three couples claim it did. Yet just as I don’t doubt my own claim, I also have no reason to doubt any of these others.

Kate and I are convinced that if we hadn’t been married, we would not have had the motivation to make the changes we needed to recover from this nosedive. Because we were married, we became very intentional about our life as a couple and as parents.

Combining my own experience with the wider evidence from commitment theory, I think there are three plausible reasons why marriage might change people:

1. The decision to marry and stay married. When we make decisions, we are more likely to carry them through. On Christmas day, my family decided to go for a walk before our late afternoon turkey lunch. It being rural England, the weather started off drizzly and ended up torrential. Did we give up? Of course not. We’re English! But had we taken a ‘see how it goes’ attitude to the walk rather than making a clear decision, not only would we have given up early on, but we would not have had the laughs that we did. Decisions matter.

2. Having a clear plan. Plans put you on the same page and remove any possibility of ambiguity or asymmetry of commitment. Plans send signals about the big picture, conveying a jointly agreed purpose and destination. Few businesses are successful without a plan. Relationships are no different. Plans matter.

3. The day itself—the public celebration of the union. I remember having more butterflies in my stomach on the morning of my wedding day than ever before or since. That includes coming under fire as a military helicopter pilot. What on earth am I letting myself in for, I thought to myself? But as soon as I saw friends and family, my nerves vanished. “Great choice, Harry,” was what they were saying. That was the positive motivator. But there was also a negative one, too. Making our big statement in front of others made it that much harder to back out. It gave us that extra bit more of an incentive to make it work. Never underestimate the power of social affirmation and social accountability!

Of course, you can have these three ingredients in an unmarried cohabiting relationship. But they are necessarily present in a marriage.

Are the half of married couples who reckon they would have stayed together even if they had remained unmarried saying that getting married didn’t matter? Maybe. But it’s hard to believe these powerful reasons didn’t add any cement whatsoever to the foundations of their life together.

Given how hard it is to disentangle cause and correlation in our own minds, not just in social science, it’s perhaps remarkable that as many as one in three couples were willing to pin down the fact that they are still together on the act of marriage. I suspect they are right.