With some couples, one partner is substantially more committed than the other. We call these Asymmetrically Committed Relationships (ACRs). No one who is looking for lasting love wants to find themselves in an ACR, but we suspect it has become increasingly easy to land in one. It doesn’t have to be this way.

Relationship scholars have long been fascinated by the implications of ACRs, though only a handful of studies examine these the characteristics of these relationships.1 Decades ago, sociologist Peter Blau wrote at length about differential investment in a relationship. Here is a classic quote from his 1964 book: "If one lover is considerably more involved than the other, his greater commitment invites exploitation or provokes feelings of entrapment, both of which obliterate love."2

Years before Blau wrote, Willard Waller coined the relatively well-known “principle of least interest” about power in relationships, a principle that was influenced by the writings of the sociologist, Edward Ross.3 Waller wrote: "That person is able to dictate the conditions of association whose interest in the continuation of the affair is least.’’4

The principles Waller and Ross wrote about obviously hold for any relationship, whether romantic, family, or business. In the social science literature focused on the nature of commitment, the same themes emerge.5 The person who is most committed to a relationship continuing has, in some important ways, less power than the one who cares less—especially if that partner could not care less. Blau drew attention to the nature of these relationships by putting them squarely into the framework of commitment, noting how differential commitment can obliterate love, as large differences in power often do.

In a new study entitled, Asymmetrically Committed Relationships,6 we, along with our colleagues, examined asymmetrical commitment in the relationships of unmarried, young adults.

For our study, we used a subsample of 315 couples from our national, longitudinal sample of dating and cohabiting young adults in opposite-sex relationships aged 18 to 34.7 This sample allowed us to directly compare partners’ ratings on commitment (how dedicated one is to the future, to being a couple, etc.). We defined ACRs as those in which the partners differed by 1 standard deviation or more; thus, relationships were either ACRs or not, and within ACRs, there is a weak-link and a strong-link partner.8 This assured that couples we were analyzing as having ACRs had an, arguably, important difference in partner levels of commitment. To get a feel for this, it would be like one partner scoring at the 69th percentile on commitment while the other scores at the 31st.

What did we find regarding the numbers of asymmetrical relationships?

We have not always found such interesting differences between men and women on commitment in our studies on premarital cohabitation, but when we have found them, the differences always go in the direction reflected in this study. That is, in non-married or premarital relationships, when there is a difference, men are more likely to be the less committed partner than women—by a factor of about 2:1.

One finding from our earlier studies seems especially relevant here.9 We found that there was no difference in the commitment levels of husbands and wives among couples who either only cohabited after being engaged or who waited until marriage to move in together, but among those who had lived together prior to being engaged, there was a substantial difference in commitment between partners. Husbands in these marriages tended to be less committed than their wives, as well as less committed than men or women in relationships where couples had only lived together after marriage or engagement. For these couples, the differences were strong before marriage and remained large years into marriage.

Before taking in some other findings, let’s reflect on the commitment finding. Say you are considering marrying someone, but you believe they are less committed to you than you are to them. You may or may not marry this person, but, if you do, you do not want to count on a trip to the altar to fix the gap in commitment. As we like to say, transition is not transformation.

In our work on premarital cohabitation, we have tested the prediction that moving in together before marriage or engagement is riskier than waiting until after that big question about commitment to the future is settled. Our concern has been that people risk getting stuck in relationships they might otherwise have left because cohabitation made it that much harder to break up.10 We have found support for that prediction in many samples with findings published in multiple journal articles.11

It is immensely dissatisfying and frustrating to be the more committed partner in an unequally committed relationship.

That last finding must seem terribly obvious, but we were interested in it because of our belief that ambiguity about the nature and status of relationships has become such a strong part of how relationships form these days. Having mutual plans for marriage should be consistent with partners having both high and symmetrical commitment. Even so, we found this non-trivial percentage (25 percent) of relationships that were ACRs despite mutual plans for marriage. You might wonder how that could happen. Much of what we just wrote about cohabiting prior to being married or, at least, prior to having mutual clarity about a future together provides one explanation.

We found evidence that weak links’ ratings of poor relationship quality could easily be attributed to their low commitment levels, which makes total sense. First, people will be less committed to relationships that have problems. Second, relationships will have more problems when people are less committed. The strong links’ patterns were more surprising. Typically, being highly committed leads to greater inhibition of negative behavior and happier relationships, but not for strong links. They tended to score very high on commitment (higher on average even than those not in ACRs), but they also reported lower relationship quality, more conflict, and more aggression—including aggression toward their partners.

These findings are consistent with what theorists such as Blau had long suggested: it is immensely dissatisfying and frustrating to be the more committed partner in an unequally committed relationship. That’s not a happy place to be. In fact, in a report we wrote a couple of years ago (Before “I Do”), we showed that those who had perceived, prior to marrying, that they were more committed than their partner reported lower marital quality.13 The perception of asymmetrical commitment was among the best predictors of lower marital quality once married. 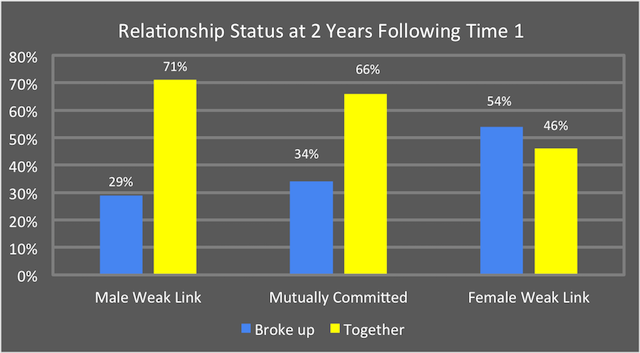 This finding was reminiscent of a few earlier studies, including some from decades ago, that examined differential levels of investment or love between partners.14 We knew to test for this, but we were not sure how strongly to expect this finding in this day and age. Overall, women’s levels of commitment were vastly more predictive than men’s levels of who stayed together and who did not (five times more predictive). In part, we think this means that there are some men (by no means all or most) who are content to hang out with a woman they are not really serious about until that woman gets fed up. We will dig into that curiosity in a future blog.

Are There More Asymmetrically Committed Relationships Than Ever?

We believe that asymmetrically committed relationships are more common now than at any time in the past 50 years. We cannot test or prove this by any data of which we are aware, but we believe this because of the following reasoning:

Think of it this way. With fewer cultural scripts and customs forcing commitment to be made clear (whether high or low, mutual or not), more people are finding themselves in long-term, unmarried relationships, sometimes for many years, before they realize that their partner is just not that into them. Sliding into moving together or having a child together is often not transformative. The strongest commitments tend to be those that result from decisions, particularly decisions people make while they still have full freedom to choose.

All this presents a difficult set of circumstances for many young adults. Sure, it’s not usually wise to ask about your partner’s willingness to build a life with you on a second date (and we hesitate to use the word “date” since even that concept has fallen under the spell of ambiguity).15 But when the inertia for continuing a relationship is growing, it starts to be increasingly risky to avoid steps to determine if you both are on the same page.

A word of advice: If you are searching for lasting love and commitment, do not wait too long to clarify whether you and your partner want the same future. We cannot say exactly how long you should be with someone before pushing for more clarity about commitment; we just know a lot of people are waiting too long. And, as they wait, the less committed partner has strong reasons to avoid having “the talk” (Want to read more on this? See here and here).

As our new study makes clear: It’s painful to be hanging in with someone who is mostly just hanging around.

1. You can read much more about the literature on this notion in our new paper. See endnote 6 below.

6. The official posting for our paper by the Journal of Social and Personal Relationships can be found at the link in this article. If you wish to read the paper and are unable to because of the paywall, you can read our final, submitted version here.

7. The broader sample well reflects the demographics and characteristics of young adults in this age range in the U.S. One paper that describes the sample and methods of the parent study is this one: Rhoades, G. K., Stanley, S. M., & Markman, H. J. (2012). The impact of the transition to cohabitation on relationship functioning: Cross-sectional and longitudinal findings. Journal of Family Psychology, 26(3), 348 - 358.

8. To our knowledge, the language of “weak links” and “strong links” was first used by Attridge et al.: Attridge, M., Berscheid, E., & Simpson, J. A. (1995). Predicting relationship stability from both partners versus one. Journal of Personality and Social Psychology, 69, 254-268.

10. For the original, main piece on this assertion, see the following article. What we predicted there has been demonstrated now in a variety of empirical studies: Stanley, S. M., Rhoades, G. K., & Markman, H. J. (2006). Sliding vs. Deciding: Inertia and the premarital cohabitation effect. Family Relations, 55, 499-509. You can read this manuscript in word document form here.

12. In survey studies using general samples such as this one, the type of violence in the relationships will probably not be what most people think about when they think of battering or domestic violence; instead, it will be what researchers now well understand to be the relatively common aggression found in the relationships of young adults who have difficulties managing conflict and regulating negative emotions. This is a complex subject far beyond our purposes here, but we wish to make clear what is measured in this type of survey study.

13. This report is also based on a subsample of our national, longitudinal study sample of unmarried young adults, whom we followed longitudinally for 5 years.

15. See various pieces we have written ambiguity in today’s premarital or unmarried relationships: here, here, or here, for example.