Is the Child Penalty for Moms in the Workforce a Result of Childbirth and Breastfeeding?

Why do women, but not men, pay a "child penalty" in the workforce, seeing their earnings decline after their first little one is born? A new study from the Princeton economist Henrik Kleven and two coauthors looks at a massive Danish dataset and rules out a few explanations. Most notably, the penalty does not appear to happen because only women can give birth and breastfeed: It turns out that adoptive moms pay the same penalties that biological moms do, at least over the medium-to-long run.

Here’s the money chart from the study. In both types of families, men’s earnings don’t show any type of disruption at all. And in the first few years, birth moms suffer a bigger earnings impact than adoptive moms do. But after a half-decade or so, both birth and adoptive moms sustain a hit to their earnings of nearly 20%, thanks to a mix of lower wages, fewer hours, and less workforce participation. 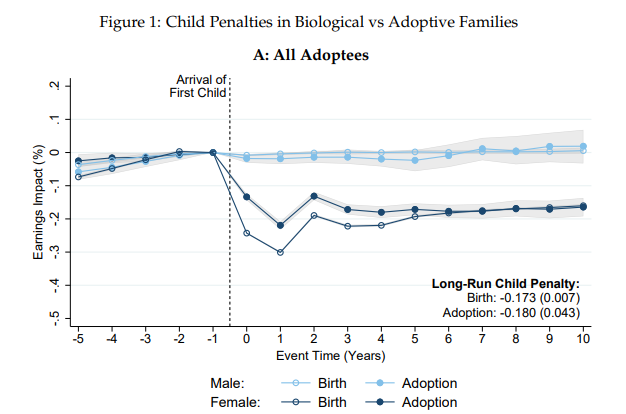 This is an important contribution by itself, but Kleven et al. take things one step further, arguing against the idea that “comparative advantage” in general is a major source of the child penalty. Applied to the division of labor within households, this economic concept says, roughly, that men tend to work more, and women tend to focus on kids more because that’s the most efficient way to organize a household.

Here their own summary is worth quoting at length:

As far as earning potential goes, this argument is reasonably compelling—and the finding that child penalties are “unaffected” by women’s earning capacity relative to their husbands’ is quite surprising. I’m curious to know how this varies from place to place, though few countries keep data as detailed as Denmark’s. I'm also interested in learning how it interacts with the U-shaped curve between moms' workforce participation and their husbands' income that Wendy Wang and I recently documented, assuming that curve is also present in Denmark.

But there’s a gaping hole in the other side of this analysis: A “comparative advantage” in parenting for one gender or the other does not need to be limited to the specific activities of childbirth and breastfeeding. It could be that one sex, on average, is better at parenting or simply enjoys it more (in which case this sex's childrearing labor would be "cheaper" in a sense). I won’t try to define good parenting and evaluate sex differences in it, but there’s a lot of evidence for the latter, preference-based theory—though it’s impossible to say how much of any difference is biological and how much comes from cultural pressures.

Women care for kids who are not their own far more than men do, accounting for 96% of child-care workers and three-quarters of schoolteachers despite the fact that they constitute less than half of the overall workforce. They are also, as this very study confirms, much more likely to leave the workforce entirely to stay home with their own children, even when they have to give up decent salaries to do so and live in societies where this is not necessarily an expectation. In surveys here in the U.S., mothers are far more likely to report that part-time work or staying at home with kids is their “ideal” situation. And as David P. Barash noted in Out of Eden (which I reviewed for IFS), there is no human society where men do as much parenting as women. This imbalance is common elsewhere in nature, too—lending credence to the notion that there’s at least some role for biology here.

Obviously, the sexes overlap in terms of how much they are willing to trade their career progress for more time with kids. Right now, I’m a stay-at-home dad myself, pounding away at my laptop while my rugrats get their TV fix and naps for the day, and my wife labors away at her full-time job. And obviously, cultural pressures on mothers also play a large (if declining) role. But the overall patterns are highly suggestive as to the preferences of men and women, and Kleven et al.’s analysis severely shortchanges them, though the paper's final sentence does urge a "greater focus on preference formation, social norms and culture."

If women find childrearing more rewarding than men do, on average, they'll derive more utility from shifting their efforts from work to home after they have kids (and will give more up when they do the opposite). Future work in this area should try to measure such a phenomenon, or at least discuss the possibility if measurements aren't available.

When it comes to explaining how households divide their labor, don't stick a fork in the "comparative advantage" theory just yet. But at least in Denmark, it seems we can rule out that this is merely the result of breastfeeding, childbirth, or the relative earning potential of husbands and wives.