"From 2011 to 2017, the percentage of Americans who find pornography morally acceptable rose by six points, whereas Americans' opinions on…other issues changed by an average of nine points," Andrew Dugan explained in the Gallup report. "But in light of this year's seven-point shift, perceptions that pornography is morally acceptable have increased more than any of the 16 other behaviors or practices Gallup has measured over the time span of 2011-2018." 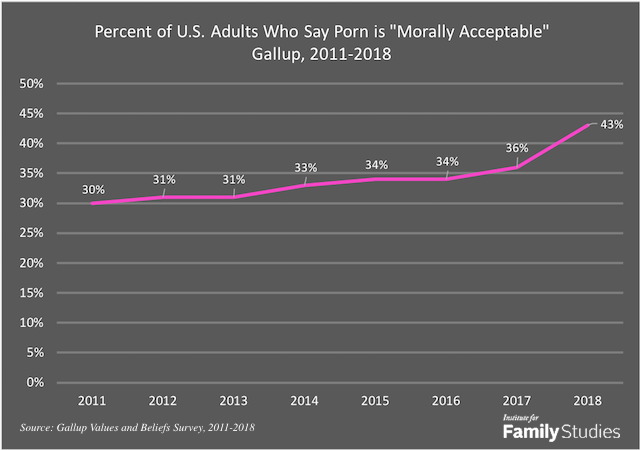 According to Dugan, the seven-percentage-point increase between 2017 and 2018:

may represent something of an outlier, in which case acceptance of pornography would be expected to decrease next year, even if it remains above the 2017 level. Or the shift, though principally driven by a structural trend, may have been exacerbated by political factors, such as the public battle between Stormy Daniels and the president. 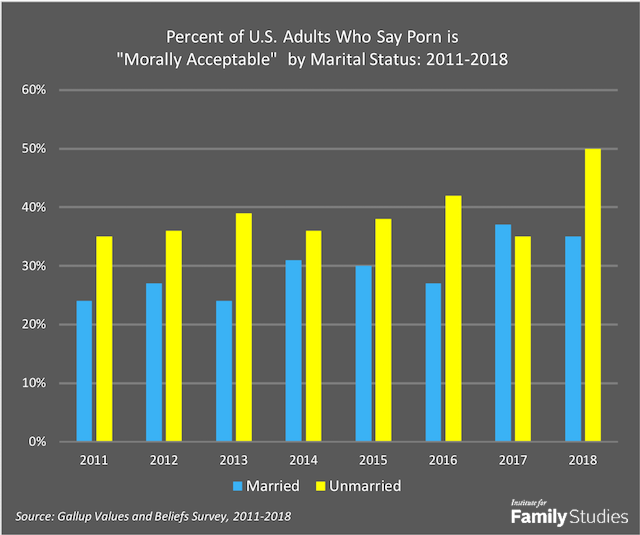 I posed these questions to Sam Perry, an assistant professor of sociology and religious studies at the University of Oklahoma, who has authored or co-authored a number of large-scale studies on pornography use and relationship stability.

“Marriage as an institution demands a pretty high standard for fidelity,” Perry said. “In fact, there's evidence from the General Social Surveys over the past few decades that Americans are becoming more disapproving of extramarital sex than they were in years past.”

He is currently working on research that looks at this question and said, “the data show that persons who view pornography at younger ages are more likely to delay marriage.”

Beyond marriage, other experts worry about the long-term impact of widespread pornography on the mental, emotional, and spiritual health of young people who are growing up in a  porn-saturated world. A study by BYU professor and family therapist Mark Butler found a link between young people’s increasing use of pornography and their experience of loneliness and isolation. In a recent IFS blog post about his research, Butler suggested that pornography’s "potential to mislead and misshape young people’s views of women and men, relationships, intimacy, and sexuality during their formative years is very real—making a pornography-loneliness partnership a threat to their overall sexual and relational well-being.”