by The Editors
Back to Blog

In Black Men Making It in America, W. Bradford Wilcox, Wendy Wang, and Ronald B. Mincy used data from the National Longitudinal Survey of Youth 1979 to track a cohort of men born between 1957 and 1964 from their early years to ages 50 and older in order to determine how many have made into the middle class or higher by midlife, and what institutional and cultural factors are behind their success.

Here are four encouraging findings from the IFS/AEI report:

1. A substantial share of black men in the United States are realizing the American Dream—at least financially—and a majority are not poor. Per a new analysis of Census data outlined in the report, more than one-in-two black men (57%) have made it into the middle class or higher as adults today, up from 38% in 1960. 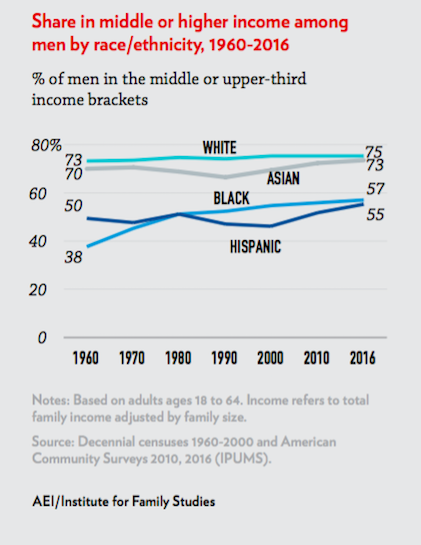 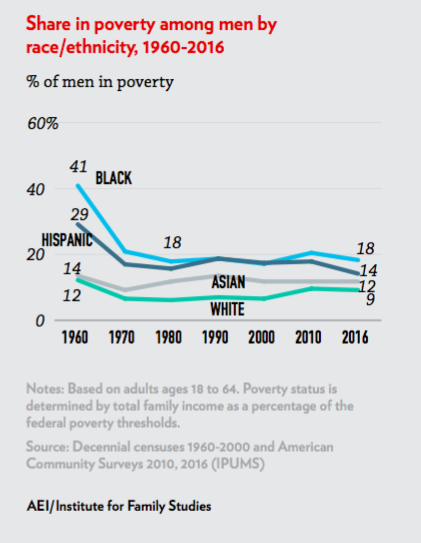 2. Education, work, and marriage are central to the economic success of black men in the United States. Black men who work full time, earned at least some college education, and married are significantly more likely to be members of the middle or upper class in their fifties. For example, about 70% of married black men are in the middle class, compared to only 20% of never-married black men and 44% of divorced black men.

3. Military service is also linked to higher odds of making it into the middle class or higher for black men. The report finds that black men who served in the military are more likely than those who did not to be in the middle class when they reach mid-life (54% vs. 45%).

4. Additionally, regular church attendance and a strong sense of personal agency are linked to upward mobility for black men. Black men who frequently attended church services at a young age are more likely to reach the middle class or higher in their fifties. For example, 53% of those who attended church as young men made it, compared to 43% who did not.

Moreover, black men who scored above average in their sense of agency as young men or teenagers in the late 1970s are more likely to be prosperous later in life, compared to their peers who did not have the same sense of agency (52% vs. 44%). "Agency" was measured by reports that they are directing the course of their lives versus feeling like they are not in control.

"The public conversation about race in America, and the fortunes of black men, in particular, has been sobering of late, and for reasons that are understandable," write Wilcox, Wang, and Mincy. "But, as our new report shows, there are also reasons for hope and models of success worth dwelling upon when it comes to how we think about and discuss race in America."

Read the full IFS/AEI report, Black Men Making It in America, and watch a panel discussion on the report’s findings hosted by AEI.

Editor’s Note: Portions of this article were taken from the executive summary of the report.