A Quarter of U.S. Parents Are Unmarried—and That Changes How Much They Invest in Their Kids

Family structure in America is sharply divided by class and race.

This family inequality appears to have real consequences for children’s chances in life. Compared with children who grow up in cohabiting or single-parent families, those who grow up with stable married parents generally have better health and behavior in childhood, are more likely to complete high school and have higher incomes as adults.

Why? Families with different structures parent differently – and that can perpetuate inequality across generations. Children in the U.S. are growing up in an era of “intensive parenting,” with many childhoods filled with piano lessons and private tutors, traveling sports teams and summer camps. While costly, these activities become a form of investment by parents that can improve their children’s grades, chances of getting into a selective university and future job opportunities.

The key finding of our study, presented at the American Sociological Association’s annual conference in August, is that family structure plays a role in how much parents spend on their children.

We looked at the spending patterns of more than 37,000 families with children who participated in the Consumer Expenditure Survey between 2003 and 2017.

We focused on three categories of spending on children: child care, schooling, and extracurricular activities. 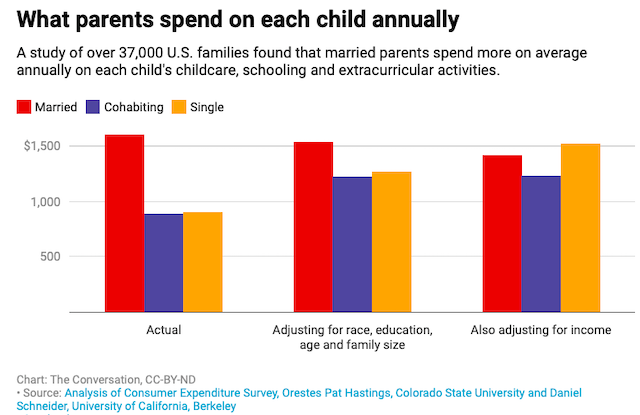 Once we account for these income differences, the gap between single parents and married parents goes away. In fact, if married and single parents had the same incomes, our model predicts single parents would spend slightly more on parental investments. In other words, single parents spend roughly an equivalent percent of their income on their children.

But, income accounts for less than half the difference in spending on children between married parents and unmarried parents who live together. So what else is a factor?

Although it’s more common than ever for unmarried people to live together, these cohabitations are relatively shorter and more likely to dissolve than marriages.

This relationship instability may depress spending on children if parents and partners are focused on a shorter horizon than other parents.

Cohabiting stepfathers also appear to be less engaged parents to stepchildren than stepfathers who are married to the child’s mother, which could shape household spending decisions.

Family structure is an important part of inequality in contemporary America. A growing share of American households with children are single-parent or cohabiting-partner households. 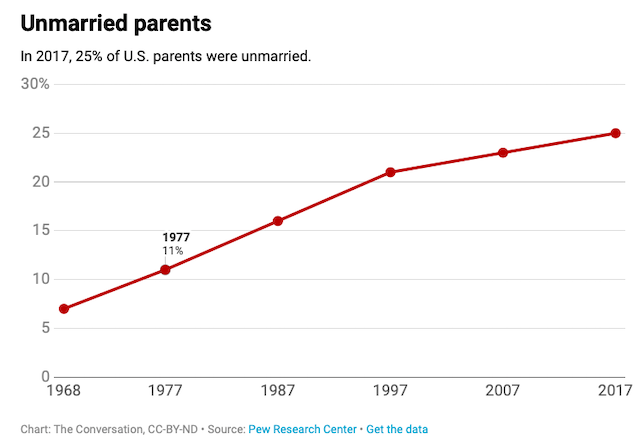 There’s no simple solution to reducing these spending inequalities, but we think our findings can inform policy in a couple of ways.

However, for unmarried couples with children, the disadvantage in spending isn’t just caused by lower incomes. While one might suggest cohabiters get married, it’s not clear that the commitment to long-term investments in children would necessarily follow.

For the children of cohabiting parents – and for all children – we think that direct public investments in children through policies such as increased support for schools and child health insurance could reduce inequalities and increase opportunities for children growing up in different types of families.

Editor's Note: This article is republished from The Conversation under a Creative Commons license. Read the original article.