The Many Ways for a Marriage to End

by Spencer James
Back to Blog

Imagine a marriage in the years leading up to divorce. You’re probably thinking of a good marriage slowing falling prey to escalating arguments, angry outbursts, hurt feelings, and grief. Or a couple facing socioeconomic and demographic disadvantages and unable to communicate with each other at a deep level. Maybe you’re picturing infidelity or violence.

The prevalence of divorce in contemporary American society means that divorce and its effects on adults and children are among the most frequently studied topics in the family sciences—and a growing segment of literature in this area suggests that the popular image of a failing marriage is wrong.

For many years, researchers and the population at large have thought about relationship breakdown as typically a linear process that occurred in stages. Prior research identifying marital quality differences between married and divorced couples1 was implicitly interpreted to mean that all divorcing couples experience similar trajectories of marital quality.

But recent research examining trends in marital quality over time suggest that there are multiple paths of marital quality throughout the life course: some marriages are happy from the start and remain so over the ensuing decades while other marriages begin with lower levels of marital satisfaction that decline with each passing year. If couples who remain married exhibit varying trajectories of marital happiness over time, perhaps divorcing couples do the same prior to divorce.

It is this possibility that I set out to explore in my new study, entitled “Variation in Marital Quality in a National Sample of Divorced Women” and forthcoming in the Journal of Family Psychology. The results, using methods that examine levels of marital happiness, communication, and conflict in the years leading to divorce in a sample of divorced women from the National Longitudinal Survey of Youth-1979, revealed that patterns of marital quality do vary among divorcing couples, as the below figure shows.

Overall and Sub-Group Trajectories of Marital Happiness, Communication, and Conflict Prior to Divorce
NLSY79, n=594 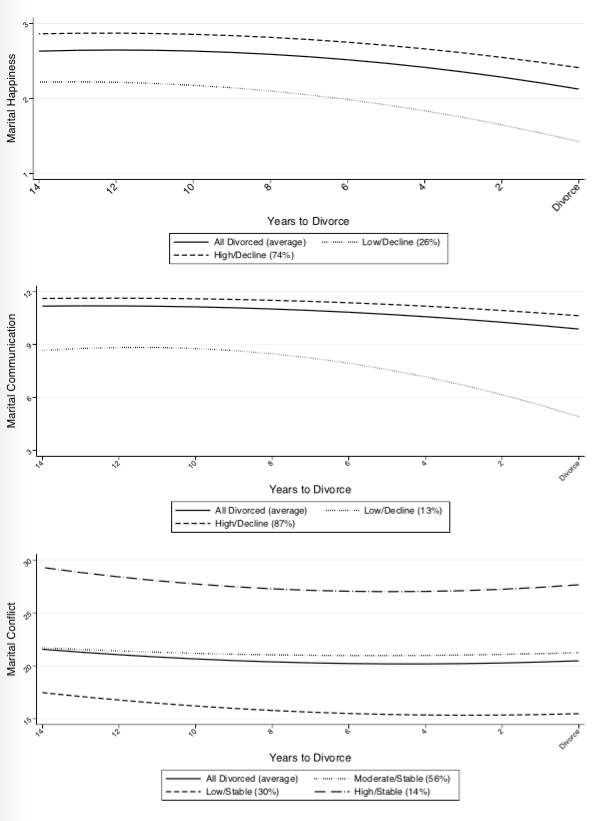 For example, the results showed two different trajectories of happiness. The first class, consisting of 26 percent of divorced women in the sample, reported relatively low happiness levels initially and showed further decline as divorce approached, with a particularly steep deterioration in happiness in the years immediately preceding the divorce. In contrast, the majority of women (74 percent) in the sample reported a somewhat startling pattern: consistently high marital happiness that declined modestly as divorce approached. Even immediately prior to the divorce, however, these marriages were still relatively happy. By conventional norms, these were not particularly unhappy marriages. And these results were not just limited to marital happiness; the results for communication were very similar, with the largest group (89% of sampled women) exhibiting remarkably high levels of marital communication over the years prior to divorce.

This stability in marital quality in the years leading to divorce was particularly visible in the results for marital conflict. While popular images of divorcing couples often involve heavy amounts of conflict in the years immediately preceding marital dissolution, the results here suggest that the seeds of marital discontent and divorce are sown long before the couple begins to consider ending the relationship. In fact, among divorcing women, there is little evidence of any change, much less an uptick, in marital conflict prior to divorce: conflict levels appear to be established relatively early on in relationships, with little if any change thereafter. Some divorcing couples have high levels of conflict; others, low levels. But the level of conflict typically remains consistent throughout marriage. Surprisingly, women who reported consistently high levels of conflict are the smallest group at only 14 percent of women, with the bulk of women reporting either moderate (56 percent) or low (30 percent) amounts of conflict.

So what can we conclude from all this? First, not all divorcing couples follow the same trajectory. While this may seem obvious at first blush, many programs aimed at reducing the divorce rate focus, to take just one example, on providing couples with better communication and problem-solving skills. Since most divorcing women did not report these as a problem, combating relationship breakdown will require more nuanced approaches

Second, divorce is clearly not always or even usually the result of a bad marriage, as popular opinion and media opinion hold. If that were true, we would expect most divorcing couples to report low levels of happiness, poor communication, and high conflict. But these results suggest that many, probably even most, divorcing women have happy, low-conflict marriages with good communication.

Spencer James is an assistant professor of family life at Brigham Young University.

1. That is, couples that remained married and those that eventually went on to divorce.