It was in nineteenth century Britain that Jane Austen penned the words “It is a truth universally acknowledged, that a single man in possession of a good fortune, must be in want of a wife.” In those days, a man with a good fortune was also likely to actually find a wife, as possession of means was prerequisite for marriage for men at that time. That was how it was then, but what about today? In 21st century America, over half of all married couples are dual-earner families, and men are no longer expected to be the sole source of financial support for their families. It seems, therefore, that possession of means would no longer matter as much for men’s marriage prospects, while at the same time it may matter more for women’s marriage prospects. Yet my new research, published in the journal Evolution and Human Behavior, shows that possession of means still matters when it comes to marriage and family formation for men, but not for women.

This research uses data from a large probability sample (55,281) of the U.S. population collected by the Census Bureau—the 2014 wave of the Study of Income and Program Participation (SIPP). The SIPP data contains information on men’s and women’s personal incomes from all sources (which includes income from all sources, not just wages, plus investment and business losses so it can be negative), in addition to the number of marriages and number of biological children.

The results of the study are shown in Figures 1 through 3, which depicts the probability of marriage, divorce, and remarriage for men and women by personal income, adjusting for age, income, education, race, and Hispanic ethnicity. The solid lines give the probability; the dotted line gives the 95% confidence interval for the probability.

As Figure 1 illustrates, for men, as income increases, the probability of marriage also increases such that men in the highest income category are about 57 percentage points more likely to marry than men in the lowest income category. The same is not true for women. High income men are more likely than low income men to marry, while income is unrelated to marriage for women. Given that marriage involves choice on both the man and the woman’s part, these results suggest that women are more likely to choose to marry men with good financial prospects, while a woman’s financial prospects are less important to men when choosing a marriage partner. 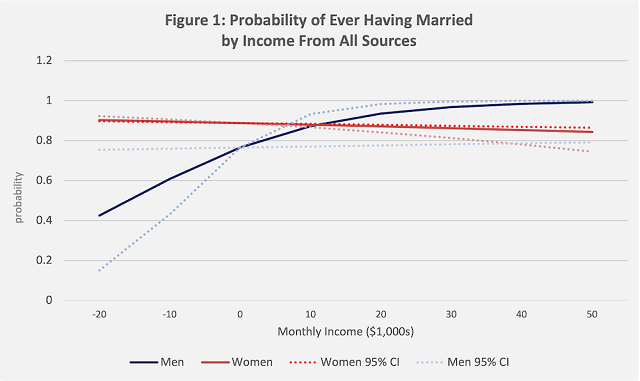 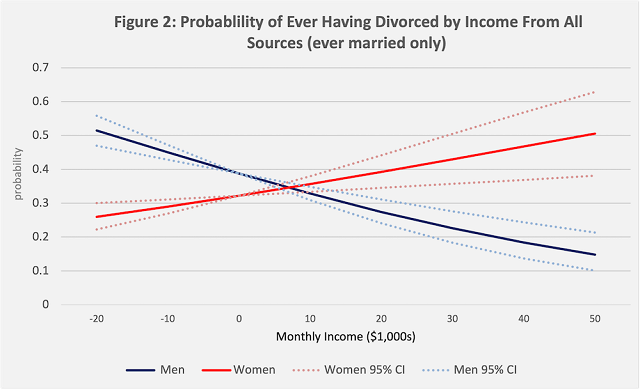 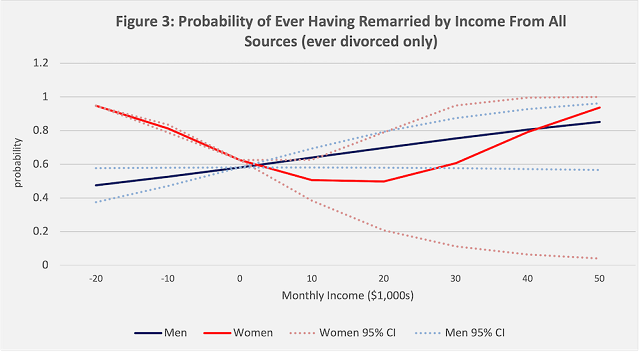 Income does not affect repeat fatherhood, however, according to the study. Men who remarry after divorce do tend to remarry relatively younger women, but this does not vary by personal income. While higher income men are more likely to remarry and marry younger women, if they already have children, they are not more likely to have additional children with their new wives.  For women with children who divorce, high income is associated with a lower probability of having additional children with new partners.

These results provide evidence about who men and women are most likely to choose to marry and have children with. The results reveal preferences regarding long term mates, and these preferences suggest that women continue to prioritize financial prospects while men do not. Of course, it may not be that most women place a high value on a man’s finances; rather it may be that women value the characteristics associated with income earning, such as industriousness, conscientiousness, and intelligence. Regardless, the results are behavioral evidence that men and women today prefer somewhat different things in a long-term mate. All in all, this evidence suggests that modern American men and women are not as different from their nineteenth century forbears as we might like to think.

Rosemary L. Hopcroft is Professor of Sociology at the University of North Carolina at Charlotte. She is the author of Evolution and Gender: Why it matters for contemporary life, Routledge 2016) and editor of The Oxford Handbook of Evolution, Biology, & Society (Oxford, 2018). 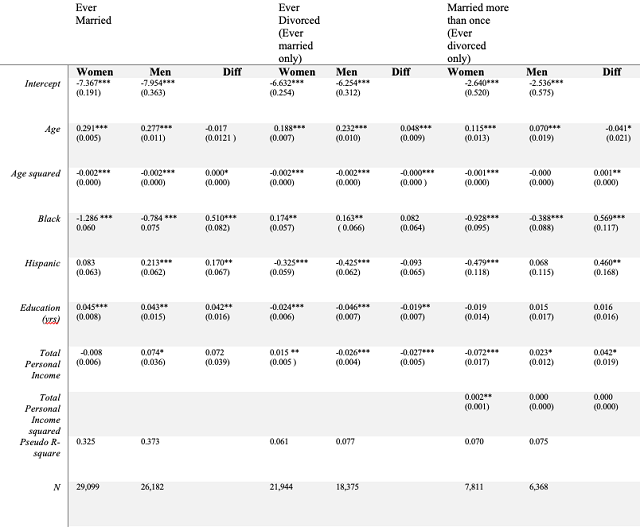