Recent years have seen a slew of detailed analyses of income mobility. The general thrust of this research is that mobility is rather low in the U.S., but the precise details vary greatly depending on how the analysis is conducted.

Two recent studies add meaningfully to this literature. In a report for the Archbridge Institute, Scott Winship painstakingly analyzes the Panel Study of Income Dynamics (which has been running for nearly half a century), generating a new set of estimates as to just how bad America’s mobility problem has become. And in a study published in Demography, Deirdre Bloome digs into the role that family structure plays.

Winship’s report doubles as a careful but readable review of the key concepts in this area. As he notes, “mobility” can denote several different things: Do children out-earn their parents? Do kids rise in the rankings, such that, say, the child of a family at the 10th percentile of income has a shot at reaching the 50th or even 90th percentile? And methodological questions abound: Should researchers adjust for family size, in light of the fact that a family with fewer mouths to feed needs less money? How many years of income are needed to get a decent estimate of someone’s overall well-being, given that incomes can vary wildly from year to year as people go through brief spells of unemployment, change jobs, etc.? What’s the best way to adjust for inflation?

Winship, of course, has his own answers to these questions, which he uses as a framework for his original work.

When it comes to “absolute” mobility—the question of whether children outearn their parents—Winship provides more optimistic numbers than the ones from Harvard’s Raj Chetty (and several coauthors) that made headlines last year. Chetty, et al. found that only half of kids live better than their parents did, while Winship argues that the correct number is more like two-thirds or even three-quarters. This is partly because Winship uses an older birth cohort (born in 1966 at the latest, vs. 1984 for Chetty), but Winship also adjusts for family size, adjusts for inflation differently, looks at income around age 40 instead of 30, and includes cash transfers from the government as income. Basically, Winship’s estimate is sunnier, but the reasons for the difference aren’t too reassuring for those worried that the economy isn’t working for anyone but the rich. Woohoo, lower fertility and more welfare!

Winship’s results are somewhat more pessimistic than previous research, however, when it comes to “relative” mobility. This is because his data allow him to average up to 15 years’ worth of income numbers, with an emphasis on incomes around age 40—a very good proxy for lifetime income. Averaging multiple years allows Winship to smooth out temporary fluctuations; focusing on the years around age 40 removes the years when recent college graduates are still establishing themselves, as well as the years when some workers but not others might choose to retire or semi-retire.

Other methods produce more optimistic results because they count these forms of temporary income instability as “mobility.” For example, a study using only one year of income might record a low value for a business executive who took the year off to travel, and conclude that his children were upwardly mobile when they earned good money themselves.

“Relative mobility reduces percentile gaps between children by about 35 to 55 percent for the earnings of men, by 55 to 70 percent for the earnings of women, and by 45 to 50 percent for family income,” Winship writes.1 In other words, if two children are born to two different places on the economic spectrum, on average, roughly half of that gap will remain when they are adults. Winship follows other researchers in noting a special “stickiness” at the top and bottom, with the richest and poorest Americans being especially likely to end up in the same boat as their parents: 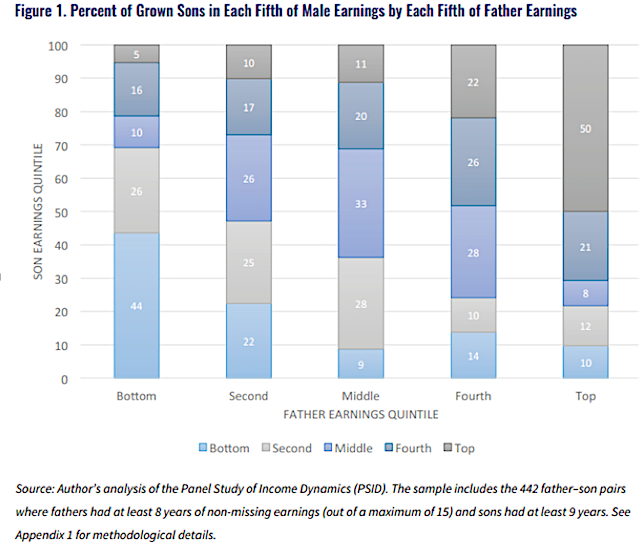 Fascinatingly, Winship also reports the correlation between siblings’ income—a comparison that reveals the combined power of genes, neighborhoods, and home environments. That combined power is something to behold: 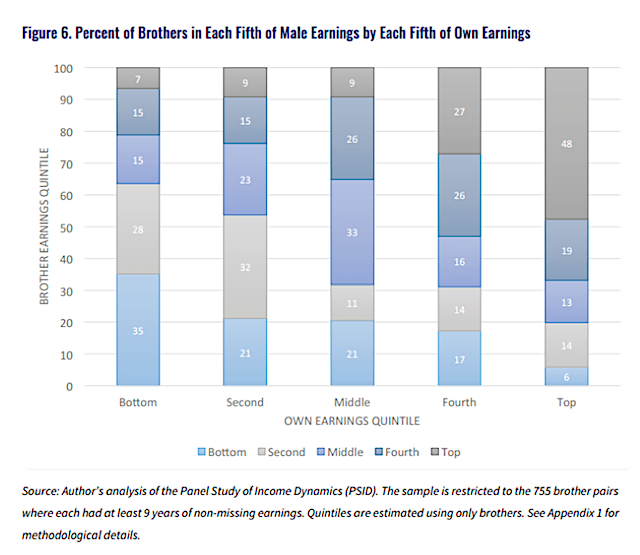 Basically, siblings resemble each other about as strongly as parents resemble their kids. Which brings us to the question of what it is that makes income run in families.

It’s well-established that genes play an outsized role, and few would deny that the benefits of money itself contribute as well, but what about the home environment? This is beyond the scope of Winship’s analysis, but it’s taken up in another recent study by Deirdre Bloome.

Further revealing the long reach of Raj Chetty, this research too partly builds on his work. Chetty et al. showed that areas with lots of single-parent families had depressed rates of upward economic mobility. Bloome’s analysis zooms in to the individual level and finds basically the same thing: kids from unstable families are more “mobile,” but because they’re more likely to fall from the middle or upper class, not because they’re more likely to rise from the lower class. 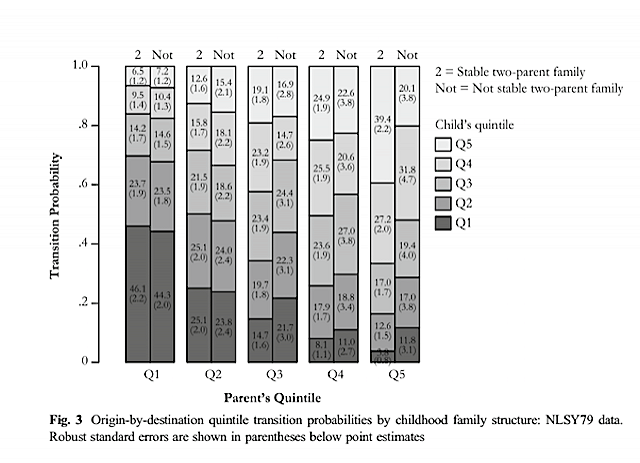 Like Winship, Bloome breaks new ground in analyzing longer time periods than previous studies have. She employs the 1979 National Longitudinal Survey of Youth; though it began following its subjects when they were ages 14-22, it collected data on their family circumstances all the way back to birth via a “childhood residence calendar.” This means she doesn’t have to limit herself to one point in time, or to a simple dichotomy between stable two-parent families and all others—she can actually count the number of family-structure transitions kids experienced and see how it relates to their adult income. Indeed, kids who experience more family transitions earn less relative to their parents: 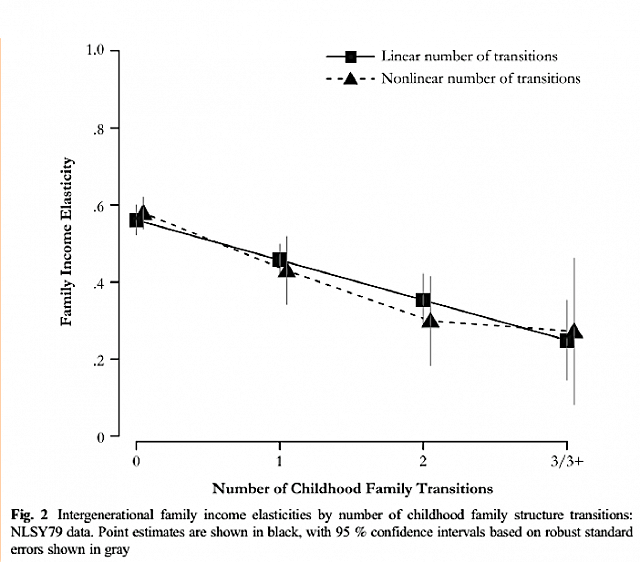 Given the complexity of the American economy and human behavior more generally, no study in this area can be definitive. But Winship and Bloome have provided us new and important information about income mobility in this country.

Robert VerBruggen is managing editor of The American Conservative

1. A quick word of caution regarding women’s and family earnings, though: these are a trickier proposition than men’s earnings. Despite an uptick in stay-at-home dads, men are generally culturally expected to work full-time, while many women have the option of staying home or working part-time. I would argue that if two men make $50,000 each and have wives capable of making $50,000 each as well, those families should be treated as equally well-off, even if one woman works and the other chooses not to. This of course is impossible because there is no way to collect data on what homemakers would earn if they worked. (It would be interesting to “impute” the values based on the women’s other characteristics and see how the results changed, though.) Winship does report that the results are similar when he excludes years with no earnings, and even if daughters’ incomes are compared with fathers’.