Janet Yellen’s Husband on Men, Marriage, and the Family

Since President Obama nominated economist and Federal Reserve veteran Janet Yellen to chair the Fed yesterday, her extensive academic work has received new attention around the web. She coauthored many of her papers with her husband, the Nobel Prize–winning economist George Akerlof---and as we're reviewing the couple's many achievements, Akerlof's 1998 paper "Men without Children" should not be overlooked.

It's widely acknowledged that children suffer when their dads aren't around, and that divorce and nonmarital child-bearing make this situation increasingly common. Less well-known is the fact that men, too, are hurt by the decline of marriage and fatherhood. Akerlof tackles the latter problem, arguing that low marriage rates contribute to single men's elevated rates of crime, drug addiction, unemployment, mortality, and other problems.

Men, too, are hurt by the decline of marriage and fatherhood.

As the stereotypes have always told us, "men settle down when they get married: if they fail to get married they fail to settle down." Akerlof considers marriage "according to its traditional and conventional meaning as a rite of passage—a sacrament that marks the transition from one stage of life to another." "With marriage," he continues, summarizing the Encyclopedia Britannica’s definition, "the bride and the groom will have increased commitment toward each other, toward their offspring, and, if religious, toward the Lord Himself."

And the facts back up this view: "marriage begins a period in which men devote themselves to the acquisition of human capital whose returns will later be used to support the marriage." Thus in delaying marriage, men "are also delaying the transition that it symbolizes." As the chart below shows, men now delay marriage even more than they did a decade ago, which allows them to put off this transition yet longer. 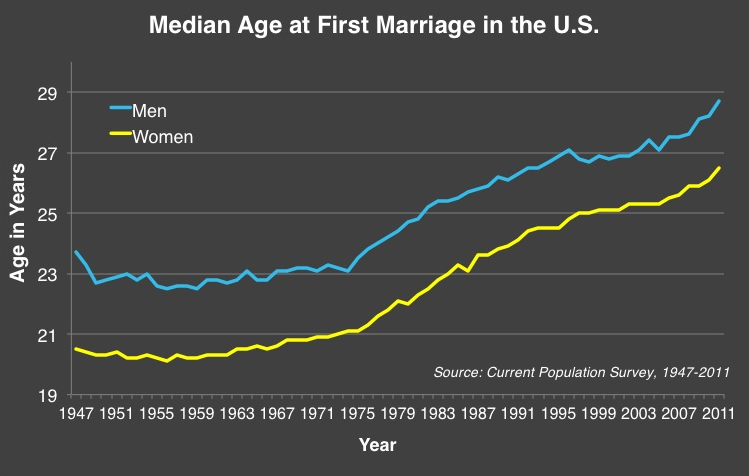 After presenting a slew of evidence showing the differences between married and single men, from employment and wages to crime, drug use, and death rates, Akerlof proceeds to test to what extent these gaps can be attributed to selection effects. (Well-employed men are more likely to get married in the first place; the impact of this fact on the higher employment of married men would be a selection effect not attributable to marriage.) "Most of the wage premium," he concludes after testing the numbers, "is due to the differential accumulation of human capital due to marriage." Similar findings hold for other differences between married men and bachelors. Selection bias plays a significant role, but it's not the whole story.

A more recent paper by Alexandra Killewald confirms one crucial aspect of Akerlof's argument: that marriage and fatherhood raise men's wages. She found that "married men who become residential fathers receive wage gains of around 4 percent, above and beyond the marriage premium of 7 percent." Importantly, however, not all dads reap those gains: only men who are married to the mothers of their children and share a household with them. Cohabiting biological fathers and married stepfathers miss out on the bonus.

That's likely because, Killewald argues, marriage, (biological) fatherhood, and coresidence together interact in a way that reinforces men's identity as fathers, commitment to their responsibilities, and determination to provide for their families. In other words, as Nicholas W.  Townsend has documented, marriage, work, and fatherhood remain a package deal in most men's minds (if not in their lives). Policymakers and community leaders should not neglect this fact as they seek to reintegrate struggling men into their families and the workforce.