Is More Welfare the Solution to Abortion?

With Roe v. Wade evidently headed toward its demise, Americans have taken to debating the abortion issue with renewed vigor. The fundamental question here, of course, is at what point we should consider an unborn child a human being deserving of legal protections, including the right not to be intentionally killed. Once that issue is decided, much of the rest simply falls into place. But that’s a tough one, so mostly we skip over it and argue about secondary issues instead.

One of those topics is whether the government should do more to support new mothers in a post-Roe world, especially by continuing the COVID-era no-strings-attached “child allowance.” And there are several connections between Roe and poverty relief.

Some say conservatives should be eager to give parents money; otherwise, the argument goes, they’ll be “pro-life but only until birth.” Yet the allure of this argument is odd. If an unborn child is a person deserving of normal legal protections, as pro-lifers believe, then laws against abortion are simply laws preventing one person from intentionally harming another. One may—quite obviously—support laws against deliberate harm while opposing generous welfare policies, a separate issue implicating countless tradeoffs: the morality of redistribution, the proper role of government, the effect of aid on work incentives, the desire to alleviate need, and so on.

But there are also more practical ways to see the connection between family support and abortion. For example, if generous support for parents is the right thing to do for reasons having nothing to do with abortion, more at-risk kids will benefit from them if it is banned in much of the country. And if the government did more to support parents, then women might be less likely to have abortions. Even after Roe, abortion will be freely available in blue states (to both residents and travelers), and red states will struggle to control the flow of abortion-inducing drugs. The total number of abortions in the U.S. could fall less than 15 percent.

In this short piece, I’m not going to resolve all these questions. But let’s look at the numbers on whether more generous welfare policies might reduce abortion. Briefly put, there could be such an effect on the margin, but it wouldn’t be a night-and-day difference—and the longer-term ramifications are harder to nail down.

Let’s start by simply looking at the data. Barring the unlikely event of a nationwide policy enacted through federal legislation, the post-Roe landscape will be one of red states vs. blue states, so it makes sense to look at the state level. Here I’ve plotted the abortion rates of states’ residents (per 1,000 women 15-44) against a measure of states’ welfare spending; the details are described in the note.1 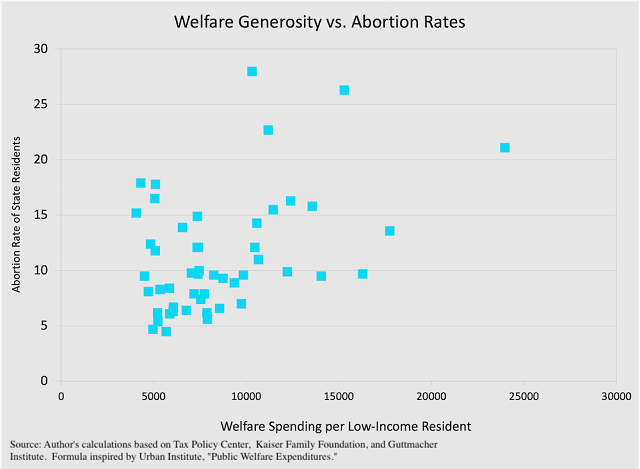 And since welfare generosity is tricky to measure across states in a fair way—states differ in their cost of living and fiscal capacity in addition to their stinginess—here’s a chart of abortion rates against Trump’s share of the 2020 two-party vote as an additional check. 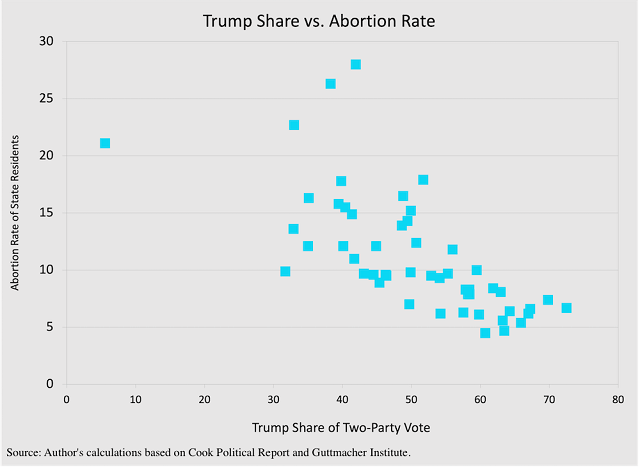 But, of course, this doesn’t tell us very much by itself. The most conservative areas of the country may have low welfare generosity, but they also have the greatest pro-life sentiment. If these two factors (not to mention plenty of other red-blue cultural differences) work in opposite ways, a small-to-moderate effect of welfare policy could be canceled out or swamped.

From the above we can say that red states are successful, somehow or other, in keeping their abortion rates down—and that, as a general matter, they probably shouldn’t look to blue states as a model of how to reduce abortion even more. But we can’t rule out that red states would be even more successful if they boosted welfare spending.

It is common sense that fewer women might have abortions if they were guaranteed financial support if they had the baby. And many women having abortions report financial reasons for doing so.

Yet the academic literature on the topic is quite mixed, with some results even suggesting that welfare increasesabortion. Here’s a brief roundup of some salient results, with a preference for studies that address broad forms of social spending on parents—as opposed to, for example, spending on health-care coverage that funds abortions directly:

Which, of course, drives home how complicated and unclear these tradeoffs are to someone who is pro-life but generally skeptical of government redistribution. A benefit expansion might reduce abortion on the margins and in the short term ... or it could have no effect, or even have the opposite effect instead. It could also have further unintended consequences over time, as our society and culture adjust to the new incentives created. As New once wrote of proposals for a child allowance:

It might encourage some women to get married, but discourage others. After all, women would have more financial means to raise children on their own. Welfare programs can create a culture of irresponsibility where recipients end up engaging in repeat behavior and depending more on the government than their own initiative. Such a culture of irresponsibility is inconsistent with a more conservative sexual culture that is needed to reduce the abortion rate. And there are usually negative implications for the children raised in such a culture.

Can a pro-lifer support a child allowance, both because it might reduce abortion and because it would help support parents after birth? Of course. But does a pro-lifer have to support a child allowance because such a policy would unambiguously reduce abortion rates to a degree that would be worth the cost, without leading to ill effects down the road? No.

1.  Abortion rates are from the Guttmacher Institute, whose data are more comprehensive than the federal government’s. The welfare-spending numbers are a recreation of the Urban Institute’s calculation of public welfare expenditures per resident below 200 percent of poverty.