Fewer than 40% of American high schoolers have ever had sexual intercourse, a decline of over 15 percentage points since the early 1990s. The historic drop is one of the findings in the 2019 iteration of the Youth Risk Behavior Survey (YRBS), a biannual survey administered by the CDC that tracks risky behaviors, including sexual intercourse, among America's high schoolers. Administered to high school students across the country since 1991, the YRBS offers one of the more detailed longitudinal views of the state of high school sexual activity.

What this year's report shows is yet another drop in that activity, consistent with the more or less continuous trend since 1991. Closer examination reveals that most teens are having less sex and delaying sex longer, and that sexually-active teens have fewer lifetime sexual partners. That confirms other data indicating that American teenagers are far more risk averse than their parents, challenging the popular media representation of an increasingly sexualized adolescent life.

As shown in the figure below, sexual intercourse has declined across racial groups, although for some more so than others. In particular, black high schoolers are less likely than ever to have had sex, dropping from 81.5% in 1991 to 42.3% today—statistically indistinguishable from both white and Hispanic students. Shares of those currently sexually active have similarly dropped, converging around 30% for black, white, and Hispanic students. 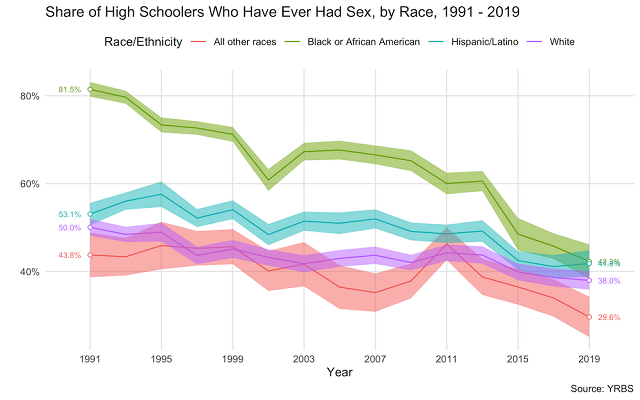 Not only are high schoolers having less sex; they are having it, on average, later and later. That's reflected in grade-level data, which show the largest declines in ever having had sexual intercourse among ninth graders, down a full 20 percentage points since 1991. Twelfth graders, by contrast, have only fallen by 10 percentage points—a disparity that suggests that some rising high schoolers "catch up" to their '90s peers later on. 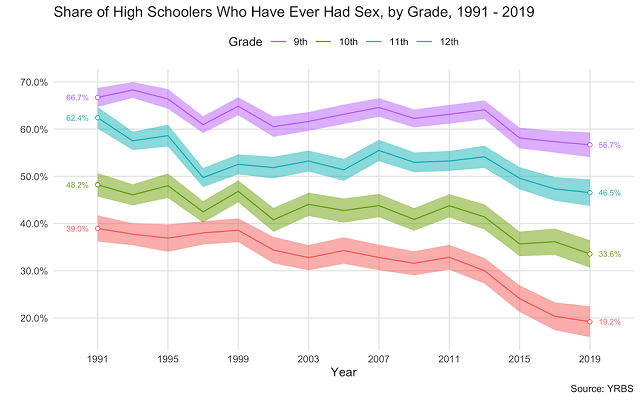 Declining sexual frequency and the rise in later initiation of sexual intercourse is also reflected in the estimate of mean lifetime sex partners among high schoolers who have had sex.1 That figure peaked in 1993, at 3; today it is 2.38, again the lowest on record.

Notably, the decline in mean sex partners has been steeper for younger teens; the average sexually-active ninth grader has had sex with two others, compared to 2.64 for a twelfth grader. In 1991, those figures were 2.88 and 3.07, respectively—both higher numbers and a much smaller gap.

Interestingly, these large changes in sexual frequency have not corresponded with a similar magnitude change in birth control practices. Novel forms of birth control—IUDs, shots, rings, etc.—were only involved in 6 to 8% of sexual activity from 2013 onwards. And today's teens are only marginally more likely to use the "pill" than they were in 1991, accounting for roughly 1 in 5 sexual encounters. 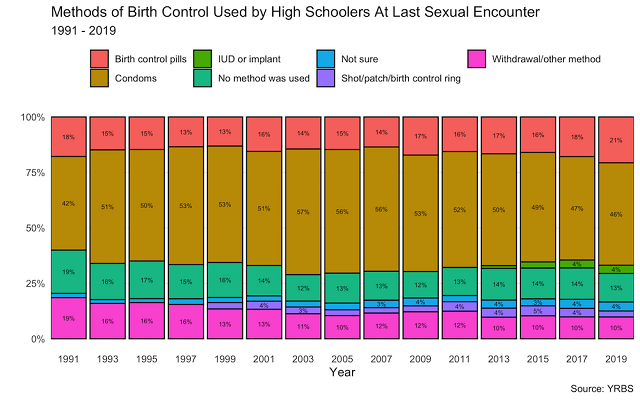 The decades-long drop in teen sex, in other words, is likely far more of a causal factor than expanded use of birth control in explaining the steady decline of teen pregnancy and abortion.

These trends are part and parcel with a more general turn away from risky behavior among teens, apparent in the YRBS and other data sources. As psychologist Jean Twenge has documented, contemporary teens not only have less sex but also drink alcohol less and drive less; the YRBS also shows that rates of experimenting with cigarette smoking is at record lows.

Such unrelenting downward trends are cause for celebration. But they should also make the astute reader—and the astute high schooler—second guess popular media representations of America's teens. While popular television shows like Euphoria and Riverdale depict an increasingly sexualized high school experience, the reality is just the opposite: America's teens today are more buttoned-up than ever before.

1. The relevant survey question is top-censored at "six or more" lifetime sexual partners, meaning that this average is necessarily an undercount.