Does the “Marriage of Equals” Exacerbate Educational Inequality?

In a recent article in The Upshot section of the New York Times, economist Tyler Cowen contends that the “marriage of equals”—the tendency of women and men to mate and have children with partners who are in the same social class as themselves—helps to propagate inequality across the generations. Noting that assortative mating has increased in recent decades, he argues that, “Of all the causes behind growing income inequality...this development may prove one of the most significant and also one of the hardest to counter.”1

Cowen focuses on income, wealth, and “power couples,” marriages between women and men in the same highly paid professions, such as law, medicine, or economics. But assortative mating also occurs in the middle and at the lower end of the socioeconomic spectrum. It clearly relates to differences in adult earnings and wealth. How much does it contribute to disparities in children’s educational achievement? My analysis of data from a large-scale longitudinal study conducted by the U.S. Department of Education2 shows just how pronounced assortative mating is among the parents of today’s young adults and how it relates to gaps in the achievement of different groups.

The young adults in the study were born in the early 1990s, entered kindergarten in 1998, and would have completed college in 2015 or 2016 (had they enrolled in and graduated from college on a typical timeline). Rather than looking at the occupations or earnings of their parents, I focused on the educational attainment of their birth mothers and biological fathers: how far they had gone in school and what diplomas and degrees they had received. The mother’s and father’s education tell us something about both the genetic endowment of their offspring and the intellectual stimulation their daughters and sons received at home.3 I divided parent attainment into five categories: less than high school, high school graduate, some college, college graduate, and postgraduate or professional degree.

Nine of 10 Young Adults Have Parents with Similar Education Levels

My first striking finding was that almost nine out of 10 of today’s young adults had mothers and fathers who shared the same education level (47 percent) or were only one level apart (41 percent). As Figure 1 illustrates, only 10 percent had parents who were two levels apart (such as having a college graduate mother and a high school graduate father), while just 2 percent had parents who were three or more levels apart (such as having a high school dropout mother and a college graduate father). 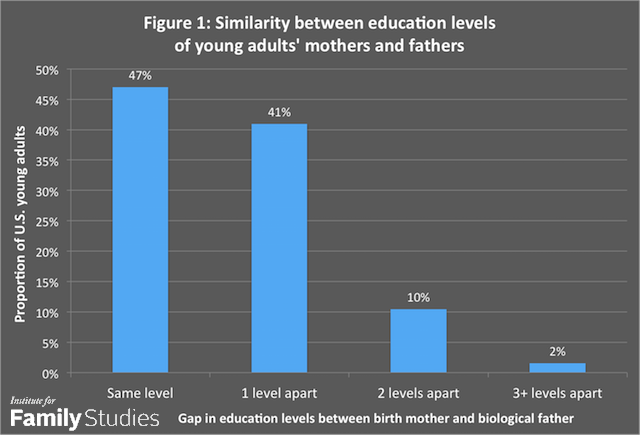 The educational level that a student’s parents attained was predictive of how well the student did in school. This was true even after making adjustments for differences in family income, poverty status, and racial and ethnic background.4 Students whose parents had both graduated college, for example, scored at the 76th percentile, on average, on a composite test of educational achievement administered in the eighth grade. The measure included assessments of reading, math, and science. By contrast, students whose parents had completed high school but no more scored at the 37th percentile on average.

The results clearly show that the marriage of equals does contribute to inequality in the educational achievement of the next generation. Students whose parents both had graduate degrees scored significantly higher on the composite measure of eighth-grade knowledge and skills than students with only one parent with a graduate degree.5 As shown in the blue bars in Figure 2, similar differences were seen at lower parent education levels, though the differences were not always statistically reliable. At the bottom of the parent-education ladder, students with two parents who never completed high school scored significantly worse than students with one high school dropout parent and one who finished high school or more. The gap in achievement between students from families at the top and bottom of the ladder was large enough to be called a chasm. Those who had two parents with graduate degrees scored at the 88th percentile, on average, whereas those with two high-school dropout parents scored at the 20th percentile. 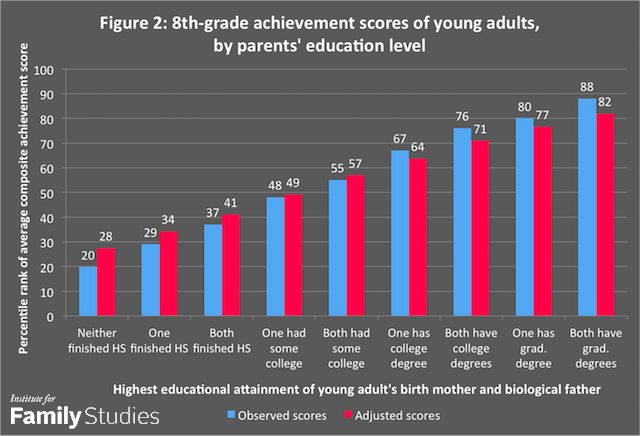 When I carried out a regression analysis to adjust the students’ achievement scores for differences across groups in family income, poverty status, and racial and ethnic makeup, the gaps between groups were reduced but remained significant. Lower down on the parent education continuum, the adjustments raised students’ average scores, because families with little education tend to have lower incomes, a greater risk of poverty, and larger numbers of Hispanic and black students. Higher up on the education continuum, the adjustments lowered students’ average scores, because families with high levels of parent education tend to have higher incomes, low poverty rates, and larger numbers of white and Asian students. Thus, the average scores of students with two high-school dropout parents went from the 20th percentile before adjustment to the 28th percentile after adjustment. And the average score of students with two parents with graduate degrees went from the 88th percentile before adjustment to the 82nd percentile after adjustment.

Before interpreting these results as a critique of assortative mating by education, there are two important qualifications to bear in mind. The first is that the marriage of equals may exacerbate educational inequality, but it also contributes to educational excellence. Young people of exceptional accomplishment, such as winners of the Intel Science Talent Search, child prodigies in music and the visual arts, or youthful creators of new cell phone apps and video games often have mothers and fathers who both have above-average levels of education, talent, and accomplishment themselves. While these young people undoubtedly benefit from attending excellent schools and being mentored by outstanding teachers, they could not have accomplished what they did without the encouragement, stimulation, support, and, yes, the genes they received from their mothers and fathers. Bringing up the bottom by pulling down the top hardly seems like a fruitful educational strategy for a society to pursue in the name of reducing inequality.

The second thing to bear in mind is that the negative consequences of assortative mating in perpetuating inequality are tempered by a phenomenon called regression to the mean. Regression to the mean is the tendency for individuals or couples who are exceptionally talented or well-endowed in other ways to have descendants who are less talented or well-endowed, closer to the average for the society. This regression occurs because the genetic transmission of complex human traits like academic aptitude is less than perfect and involves a substantial amount of random variation.6

Regression to the mean is evident in the results presented in Figure 2. For example, young adults whose mothers and fathers both had graduate or professional degrees constitute less than 3 percent of the U.S. young adult population today. If the transmission of academic aptitude were perfect, one would expect them to score near the 99th percentile on the composite assessment of achievement. And some of them did. But their adjusted average score was well below that, at the 82nd percentile. They still perform above average, but not as much so as their parents.

Regression to the mean also operates, this time in a positive direction, for individuals at the bottom of the parental education spectrum. Young adults whose mothers and fathers were both high school non-completers constituted about 7.5 percent of the young adult population. Therefore, one would expect them to score near the 4th percentile on the achievement measure. But their adjusted average score was well above that, at the 28th percentile.7 Regression upward could also be seen in the results for young adults with only one parent who had graduated high school. They would be expected to score around the 13th percentile on the basis of the cumulative frequency distribution of parent education. In fact, their adjusted average achievement score was at the 34th percentile.

Over the last several decades, organizations concerned with child poverty and youth wellbeing, such as the Annie E. Casey Foundation, the National Campaign Against Teen Pregnancy, and the administration of former New York Mayor Michael Bloomberg counseled young women and men to finish high school, get a job, and get married before having children.8 On the basis of the current findings, child advocates should also be encouraging young women and men from disadvantaged backgrounds to find a partner who has attended or completed college, if possible. If successful, such a step would likely do more for their future child’s achievement than attending Head Start or preschool. Among young women and men who have college or graduate degrees, reformers should not discourage marrying and having children with a partner who also has high educational credentials. Rather, they should advise high-achieving couples to be understanding if their offspring do not do quite as well in school as they themselves did. 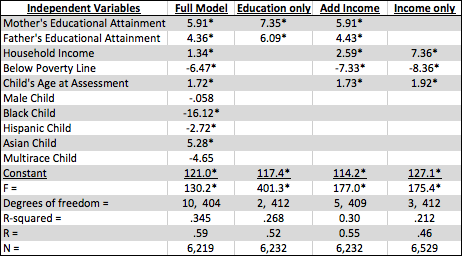 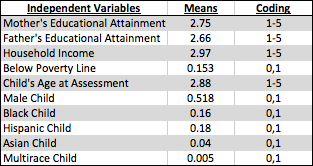 2. The study was the ECLS-K, a national survey of some 19,000 kindergarten pupils and their parents, schools, and teachers. More than 6,000 children in the original sample were followed from the start of kindergarten to the end of eighth grade. The study collected information from the resident parent about the educational attainment of biological fathers and birth mothers who were no longer living with the child.

7. The higher-than-expected achievement of students with two parents who did not finish high school may also be due in part to the overrepresentation of Hispanic students in this group. Many immigrant parents grew up in Central American countries offering less educational opportunity than the U.S. Thus, the educational attainment of these parents may not represent their academic aptitude as well as it does for native-born parents.