Is religious faith of any benefit to contemporary couples? This question has been the subject of controversy, especially in the wake of reports and studies suggesting that evangelical Protestants, among others, face higher rates of divorce than the population at large. But these studies do not give us the full picture: religious affiliation is less important than regular religious attendance when it comes to predicting divorce. Indeed, sociologist Charles Stokes finds that nominal evangelical Protestants are more likely to divorce than the average married person, whereas churchgoing evangelicals are less likely to divorce.

In this Institute for Family Studies research brief, we take up a related question: What is the association between regular religious attendance and relationship quality for married and unmarried couples? Religion is most likely to foster better family outcomes when faith is shared, so we consider the effect of attending services together (as opposed to by oneself) on relationship quality. This brief extends the analysis of religion and relationship quality for black and Latino couples presented in our recent book, Soul Mates: Religion, Sex, Love and Marriage Among African Americans and Latinos, to Americans in general. 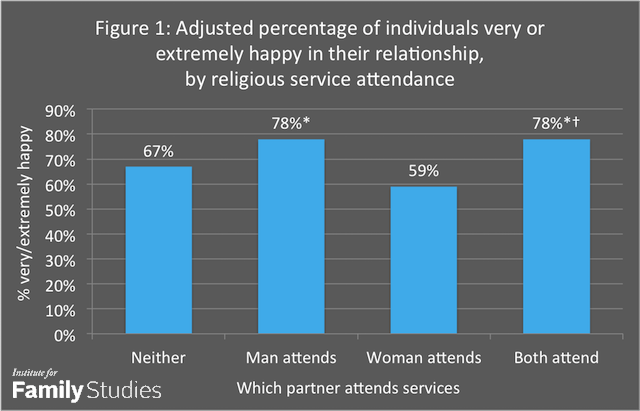 We analyze a national sample, the 2006 National Survey of Religion and Family Life, of about 1,600 working-age adults (18-59) who are in a heterosexual romantic relationship, married or unmarried, and find that religious attendance is not consistently associated with higher relationship quality among heterosexual couples.1 If just the woman attends services, the couple is less happy than if he attends alone, both attend, or neither attends religious services regularly. Men and women in couples where neither partner attends are also less happy than couples where the man attends, either with or without his partner. Seventy-eight percent of men and women in couples who regularly go to services together, or where only the man attends regularly, report that they are “very happy” or “extremely happy,” after adjusting for differences in race, age, education, marital status, region, and other factors. By contrast, 67 percent of men and women in relationships where neither partner attends are happy, and just 59 percent of people in couples where only she attends regularly report they are very happy. Clearly, shared attendance and his attendance are linked to higher self-reported relationship quality.

Shared religious service attendance and his attendance are linked to higher relationship quality.

Why is his solo attendance but not her solo attendance associated with better relationship quality? Perhaps women who are highly religious are more likely to look for spiritual communion with their partners than devout men, and to be disappointed when it is not forthcoming. Maybe solo-attending women are more likely to be seeking religious help with a difficult relationship than are solo-attending men. It might also be that men are especially likely to benefit from the normative and practical emphasis that religious institutions tend to put on family life and marital fidelity, insofar as men typically devote less time and attention to family life than women, and are more likely than women to be unfaithful. In other words, religious services may be particularly effective in turning the hearts and minds of men towards their partner’s welfare and the relationship more generally. Finally, it’s possible that religious participation increases women's expectations of their partner's behavior. When these expectations are not realized—perhaps because the men in question are not themselves religiously engaged—the relationship suffers. Still, we are not entirely sure why his solo attendance is linked to better relationship outcomes, whereas her solo attendance is linked to the worst outcomes for contemporary couples. 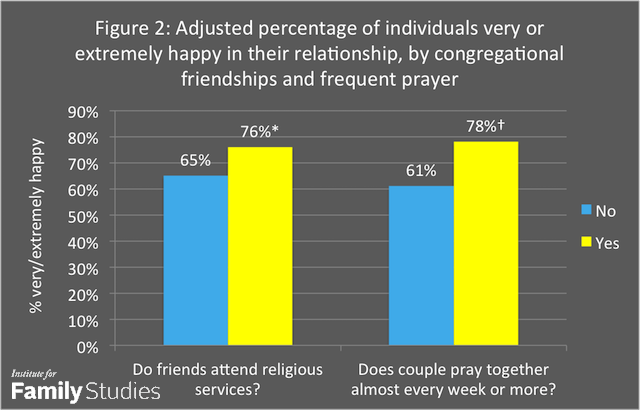 *Significantly higher than “doesn’t attend,” p<.05. †Significantly higher than “doesn’t pray together,” p<.05.
Source:Soul Mates. These results are based on a logistic regression standardization of data from the National Survey of Religion and Family Life, 2006. Results control for race, marital status, education, denomination, sex, age, presence of children, and region.

What about joint attendance? Why are couples who go to religious services together happier than those who do not? Two factors seem to be important: sharing friends in a religious congregation and praying together. As Figure 2 shows, men and women who have more than half of their friends at the same religious congregation are about 11 percentage points more likely to report they are very happy in their relationships than those who do not. Enjoying shared friendships in a religious congregation may boost relationship quality by giving such couples a sense of belonging and community, as well as other models of successful relationships. We emphasize that some of the benefits of religious participation appear to be temporal, not spiritual, and hold even for churchgoers who may be uncertain about their own devotion.

Shared prayer is even more strongly associated with higher relationship quality, such that men and women who report praying together frequently (almost once a week or more often) are 17 percentage points more likely to say they are very happy together. Joint prayer is likely to engender a heightened sense of emotional intimacy, communication and reflection about relationship priorities and concerns, and a sense of divine involvement in one’s relationship. However it works shared prayer is a stronger predictor of relationship quality than other religious factors in our statistical models. It is also a better predictor of relationship quality than race, education, age, sex, or region. Couples who pray together often are much happier than those who do not. 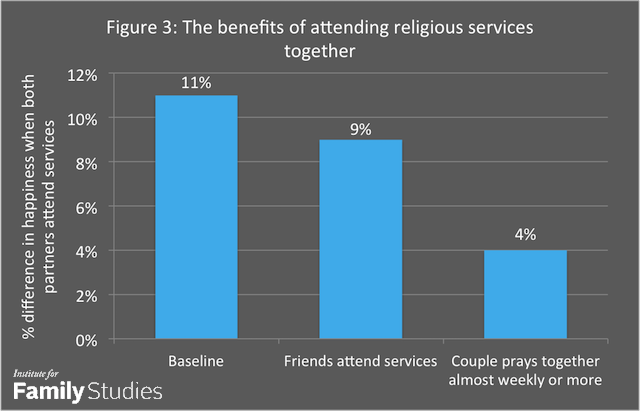 Source: Soul Mates. These results are based on a logistic regression standardization of data from the National Survey of Religion and Family Life, 2006. Results control for race, marital status, education, denomination, sex, age, presence of children, and region.

Figure 3 indicates that attending religious services with friends accounts for almost 20 percent of the association between shared religious attendance and relationship quality. Praying with one’s partner accounts for an even greater portion of this association. Combined, these two factors account for more than 60 percent of the association between joint religious attendance and reports of higher relationship quality. In other words, two of the main reasons that couples who go to church together tend to be happier is that they also are more likely to have lots of friends who attend with them and to share a common devotion to prayer.

This research brief offers two conclusions: for American couples, shared religious attendance and a man’s solo attendance are both associated with reporting significantly higher relationship quality; in contrast, men and women are much less likely to be happy in their relationships when the woman attends alone. Our findings suggest that men’s religious attendance is particularly beneficial to their relationships, perhaps because churches, synagogues, mosques, and temples are some of the few institutions in American life that devote sustained attention to encouraging men to invest in their families. Joint attendance seems to connect men and women to networks of friends who are living family-centered lives, and is also associated with a spiritually intimate behavior: praying together. Indeed, shared prayer is one of the best predictors of higher relationship quality in our models. If our results regarding relationship quality are any indication, it may well be that the couple that prays together stays together, confirmation of a long-held belief of many religious Americans.

W. Bradford Wilcox is director of the National Marriage Project at the University of Virginia and a senior fellow of the Institute for Family Studies. Nicholas H. Wolfinger is Professor in the Department of Family and Consumer Studies and Adjunct Professor of Sociology at the University of Utah.  They are the authors of Soul Mates: Religion, Sex, Love, and Marriage Among African Americans and Latinos (Oxford University Press, 2016).

1. There were not enough same-sex couples in our data to examine these relationships.