Editor's Note: In the third essay in our week-long policy symposium, Angela Rachidi, the Rowe Scholar in poverty studies at the American Enterprise Institute, explains her concerns with proposals to make the Child Tax Credit fully refundable.

President Joe Biden is proposing to expand the Child Tax Credit (CTC) and make benefits available to nonworking families as part of his pandemic economic relief package. The President is portraying this as a temporary change to help stimulate the economy, but various Democratic (and some Republican) lawmakers have recently proposed the same increases to the refundable portion of the child benefit as a permanent reform.

Instead, we are left with a proposal to expand the refundability of the CTC, creating a near-universal child allowance paid monthly to U.S. households (except for only the highest-income Americans). It would be another major expansion to the welfare state at a time when the social safety net already reaches millions of U.S. households. More cash in the pockets of low-income families has advantages for children, but a fully refundable CTC comes with unacceptable trade-offs, including employment disincentives, marriage penalties, and increased reliance on government for far too many Americans.

President Biden’s proposal would add $110 billion this year to the nearly $300 billion already spent on children through refundable taxes, health insurance, and food assistance. Less than 40%  of these new costs would go to those in the lowest quintile of income. Advocates argue that a refundable CTC would have “dramatic” effects on poverty, but close attention to historical poverty rates offers much-needed perspective. Simulations suggest a CTC reform similar to President Biden’s would reduce the overall child poverty rate by 5.6 percentage points and the deep poverty rate for children by 1.6 percentage points.

These are meaningful reductions, but the child poverty rate declined 3 percentage points from 2012–2017 due to a strong economy alone, without taxpayers footing the bill for an extra $110 billion in government spending. Further, President Biden’s added benefit would bring most of these families only a few hundred dollars above the poverty line and would do little to help them find a long-term path out of poverty.

Proponents also frequently ignore the context in which an expanded CTC would operate. Already, federal expenditures on low-income children in the US are 17 times the amount spent in the 1960s (in constant dollars) and triple the amount spent in early 1990s. A single mother in Atlanta, GA, working part-time for $10 per hour in 2020 would have received almost $14,000 from the Earned Income Tax Credit (EITC), CTC, and the Supplemental Nutrition Assistance Program (SNAP) alone, not counting government-funded health insurance. Before the pandemic, poverty rates in the U.S. were already at historic lows. Child poverty had fallen by more than one-third since 1993—largely due to welfare reform, the EITC, and SNAP.

Furthermore, the child poverty rate in the U.S. compares well with other prosperous nations when properly calculated—even Canada, with its universal child benefit and higher share of two-parent families. Poverty rates in the U.S. likely would be even lower if not for high “effective marginal tax rates” that disincentivize work by reducing the financial return to employment, and the stubbornly high rates of children living in single-parent families.

Ultimately, President Biden’s proposed CTC could raise an additional 4.7 million children a few hundred dollars above the poverty line for a cost of $110 billion this year, or $1.4 trillion over 10 years, if made permanent. To some, this might be a winning argument, but what are the trade-offs?

One trade-off is lower labor force participation. As I have previously argued, providing a fully refundable CTC to nonworking parents—which is a cash transfer, not a credit against taxes paid —would counteract some of the work incentives in the EITC. Under President Biden’s proposal, a non-working single mother with two young children would receive $13,620 per year from the CTC and SNAP, double what she would currently receive when not working. It is true that the EITC still incentivizes employment, but this dynamic weakens under an expanded CTC. 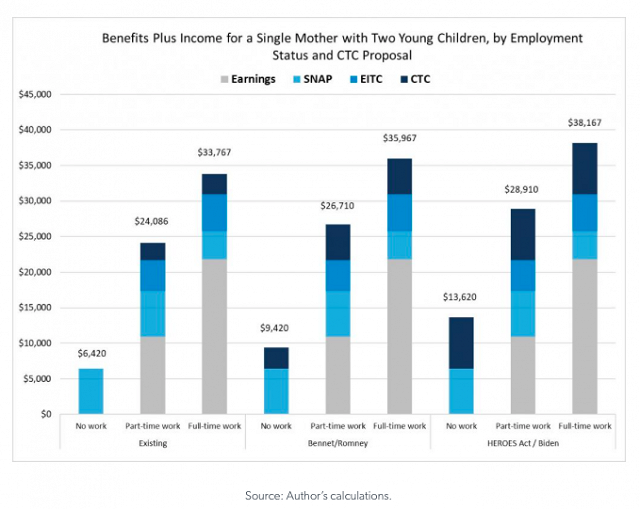 It is unclear—and to some extent unknowable—exactly how a fully refundable CTC would affect employment for those at the bottom of the income scale. It could incentivize employment, as some research suggests, if it were to function like the EITC, meaning it was only available to working families and phased in as earnings increased. But extending cash benefits to nonworking parents through the tax code has no precedent in our nation. Debating the particulars from research in other countries is meaningless because those programs do not operate within the context of other U.S. benefits, such as the EITC and SNAP. The best we can do is extrapolate from the experience of other programs here and similar programs abroad—a literature that suggests that unconditional cash transfers can negatively affect employment.

Finally, a fully refundable CTC would increase reliance on government for more Americans, continuing us down a perilous path. In his Irving Kristol Lecture, AEI’s Nicholas Eberstadt warned that the U.S. is at risk for decades of lost economic growth due to a growing reliance on government and a decline in family ties. He argued that public policy’s role is to release the dynamism of our fellow Americans, not constrain it. A fully refundable CTC would expand the role of government, decrease employment for low-income parents, and lessen the importance of marriage—entirely inconsistent with this assessment.

The intentions behind a child allowance are admirable, whether from progressives, moderates, or conservatives. Even one American child in poverty is one too many, and working families should have more of their own money to cover child-related expenses. But distributing monthly checks to U.S. households through an expanded CTC is not the right solution. Instead, policymakers should look to reduce taxes for working families, decrease effective marginal tax rates for low-income workers, and eliminate marriage penalties in the tax code.

Angela Rachidi is the Rowe Scholar in poverty studies at the American Enterprise Institute where she studies policies that affect low-income children and families.