by Institute for Family Studies, @FamStudies
Back to Blog

Last week, we released our new report with AEI and The Wheatley Institution, The Divided State of Our Unions: Family Formation in (Post-) COVID-19 America. One of the report's major findings is that interest in family formation is higher among religious Americans, with Americans who attend worship services regularly (1 to 2 times per month) more likely to express stronger desires for marriage and children during COVID than secular Americans.

As the report explains:

Religious Americans navigated the trials and tribulations of COVID-19 better than Americans with no ties to organized religion, at least on the emotional and social fronts. The social sustenance and religious meaning furnished by churches, temples, synagogues, and mosques was a lifeline for many religious attendees. Gallup data, for instance, indicate that COVID-19-related declines in emotional well-being in 2020 were non-existent among men and women who were religiously active, but large among those who attended infrequently or never during the pandemic. This fact, combined with the underlying familism of religion, means that religious men and women may be especially primed to start a family as COVID-19 lifts.

Here we compile four takeaways from The Divided State of Our Unions report about the marriage and fertility desires and plans of religious and secular Americans during the pandemic.

1. The desire for marriage increased among religious Americans.

Unmarried Americans who regularly attend religious services were most likely to have seen their desire to marry spike—by 8 percentage points overall, as the figure below shows. By contrast, there was no net increase in interest in marriage among Americans who never or seldom attend church. The nominally religious paralleled the more religious, with an 8-percentage point overall spike. Clearly, then, unmarried Americans with some religious ties are the ones most likely to hope they can head to the altar in the wake of COVID-19. 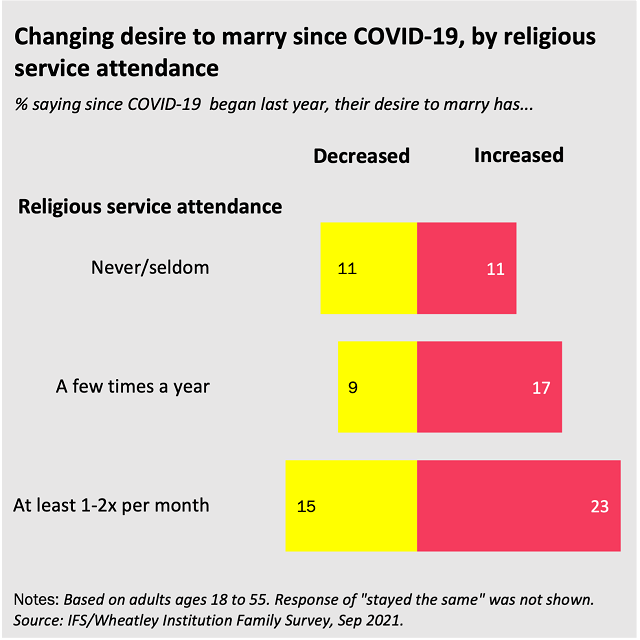 Moreover, our findings illustrates that when it comes to interest in marriage, religious Americans are "the marrying kind." For example, among those regularly attending services at churches, temples, synagogues, or mosques, our report found that fully 61% of unmarried men and women ages 18-55 wish to be married (not shown here). That compares to 55% of those who attend services infrequently and just 43% of those who never or seldom attend religious services. Moreover, a clear majority of the religiously active who are unmarried desire marriage, whereas only a minority of those who are not religiously active would like to tie the knot.

2. Religiously active Americans expressed a stronger desire for children than the nominally religious or secular. 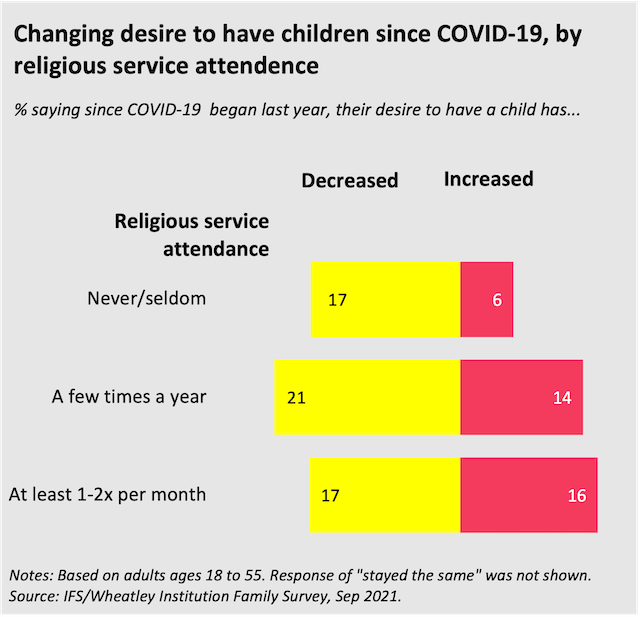 In general, religious Americans tend to be more child friendly. Americans who attend churches, temples, synagogues, or mosques are markedly more likely to have children or want them. More than 60% of childless attendees said they want children, compared to 47% of those who never attend religious services (not shown here). These findings are especially noteworthy because religious Americans are already more likely to be parents.

Religiously active Americans ages 18-55 were also more likely to report that they are engaged or plan to get engaged by 2022—with 15% reporting wedding plans, compared to 10% of those who rarely or never attend services. Unmarried adults who attend religious services a few times a year were more likely than their peers to report having wedding plans, as one in five said they are either engaged or planning to get engaged by 2022. 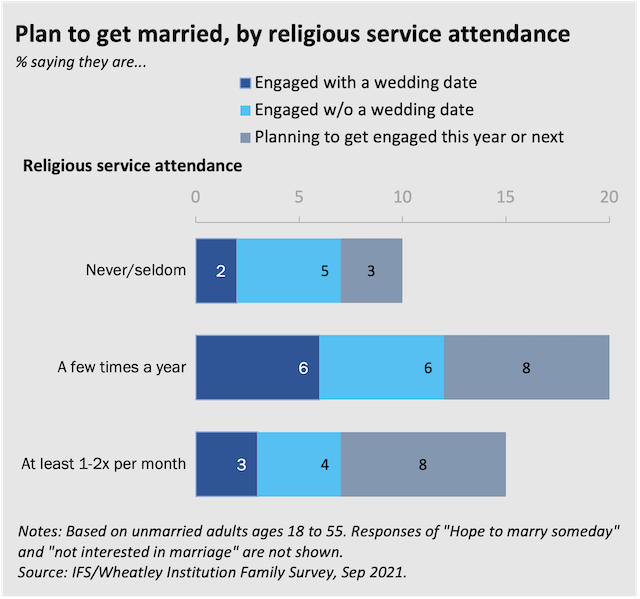 4. Religious Americans are more likely to report immediate plans for a baby.

Finally, when it comes to plans for a new baby this year or in 2022—11% of Americans ages 18-55 said they are planning to have a baby. The differences in immediate childbearing plans by religion are large, as the figure below shows. American men and women who attend worship regularly are three times as likely to say they plan to have a baby in 2021 or 2022 (18%) compared to their peers who are secular (6%). 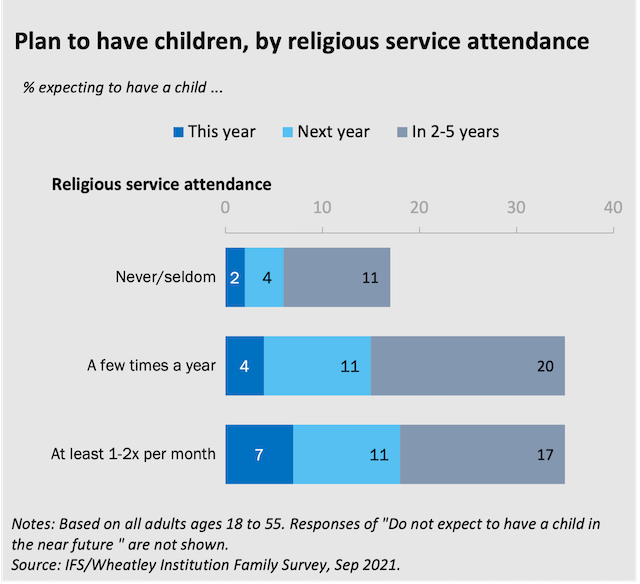 The sense of hope, community, and focus on family—not to mention higher rates of marriage—found in religious congregations across America seem to translate into large differences in intended childbearing by religiosity.

Read the full report, The Divided State of Our Unions, here.