The Divided State of Our Unions 2021

Based on two new YouGov surveys by the Institute for Family Studies (IFS) and the Wheatley Institution, this report finds the most consistent evidence for the “family polarization scenario.” The “desire to marry” since the onset of COVID-19 ticked slightly upwards, by 2 percentage points overall, whereas the desire “to have a child” among all Americans ages 18-55 moved downwards, with just 10% reporting an increased desire for children, compared to 17% indicating a decreased desire. However, beyond these global shifts in family formation attitudes, which do not tell a consistent story in favor of either of the first two scenarios, there is marked polarization in desires related to marriage and childbearing by income, religious attendance, and partisanship as COVID-19 abates.

That’s because in a pandemic-haunted world where both marriage and fertility seem especially daunting or optional, three ingredients have emerged as signally important for family formation in the United States: money, hope, and a deep dedication to family. And the rich, the religious, and Republicans are generally more likely to possess one or more of these ingredients, compared to their lower-income, secular, and Democrat/Independent-affiliated fellow citizens. The family polarization documented here is especially striking because it augments fissures in American family life that have been growing over the last half century. 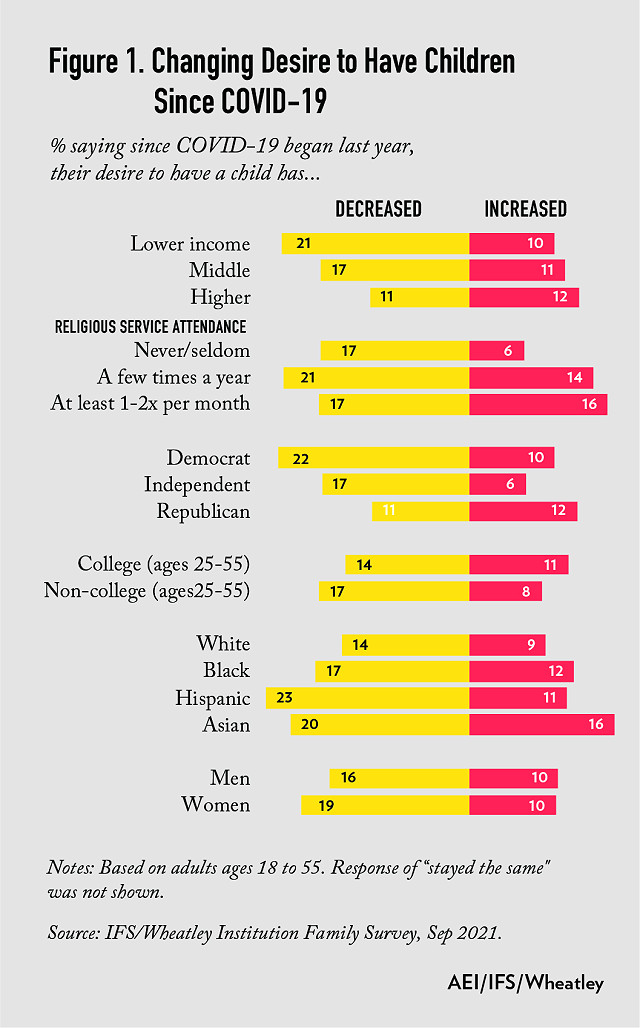 Specifically, this study documents five key findings about family formation in America for men and women ages 18-55 as the pandemic abates:

So, just as COVID-19 fueled polarization in attitudes towards public health, socializing, and politics, the pandemic also seems to have heightened differences between Americans when it comes to interest in forming families. As the pandemic lifts, the nation is likely to see a deepening divide between the affluent and everybody else, between the religious and the secular, and between Republicans and Democrats in their propensity to marry and have children.

The Divided State of Our Unions 2021 Home