Editor's Note: Over the next two weeks, we will be counting down our 10 most popular blog posts of 2021. At number 10 is this article from Daniel Cox, which was originally published on July 20, 2021.

It is not breaking news that Americans are in the midst of a social decline. The vibrancy of community life, civic engagement, and our social connections have atrophied. Delays in marriage and family formation, and declining religious involvement have left us rootless and rudderless. The global pandemic created an entirely new set of social challenges, but the roots of America’s social decline far predated COVID-19.

One of the most critical elements of this malaise is also among the least discussed—the decline of friendship. In the 1990s, Americans had, on average, robust social lives populated with a variety of friends and family members. A recent survey conducted by the Survey Center on American Life finds Americans experiencing a precipitous decline not only in the number of friends they have, but in the role that friends play in their life.

Men appear to have suffered disproportionately in the collapse of friendships. In 1990, a majority (55%) of men had at least six close friends. Today, only 27% report having this number of close friendships. Single men are in even worse shape—though single women are also doing worse than their married peers. More than one in five (21%) single men report having no close friends, compared to 12% of married men. 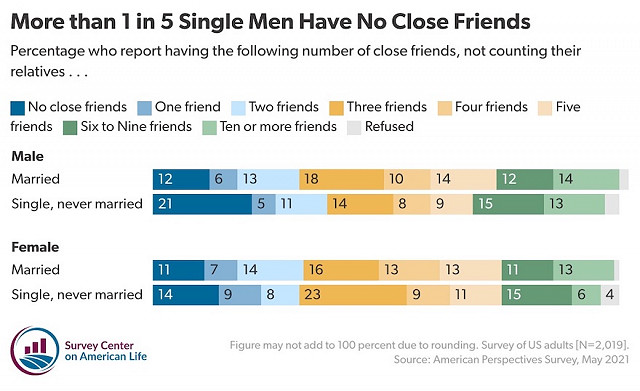 When it comes to health and happiness, it’s difficult to overstate the benefits of marriage. Married people are far less likely to feel lonely and depressed, and to live longer than unmarried people. And the marital benefits are especially pronounced among men.

Married women rely more on their friends for emotional support and therefore put more time and effort into maintaining these relationships. This is important because the size of our social networks influence our well-being. All else equal, the more close friends we have, the less lonely we feel, and the less likely we are to feel anxious or depressed.

But it’s not just that men have fewer friends, or talk to them less often. Research has shown that male friendships tend to be more activity oriented, whereas female friendships tend to establish more intimate connections. Our survey shows a large gender gap in the emotional connection men and women have with their friends. Nearly half of women (48%) say they had a private conversation with a friend during which they shared personal feelings or problems, an experience shared by only 30% of men. Women are also more likely to have told a friend they loved them and to have received emotional support from their friends.

Independent of marital status and the number of friends we have, Americans who report regularly receiving emotional support from their friends are less apt to feel lonely, or to struggle with depression and anxiety.

Marriage is not a universal remedy for loneliness and social isolation, but it does provide a solid social foundation. What’s more, marriage and friendship often provide self-reinforcing social benefits. Many married Americans meet their spouse through their network of friends. And in getting married, we immediately add a host of new family members and friends into our social circle.

One negative outcome that marriage might have on friendship is that it may reduce the number of opposite-gender friends we have. Three-quarters of single men (75%) and roughly two-thirds (65%) of single women have a friend of the opposite sex. In contrast, just 54% of married men and only 43% of married women report having a close friend of a different gender.  These different-gender friendships are particularly important for men who rely disproportionately on their female friends for emotional support. In our survey, men with opposite-gender friends were far more likely to receive emotional support from their friends than those with only male friends. 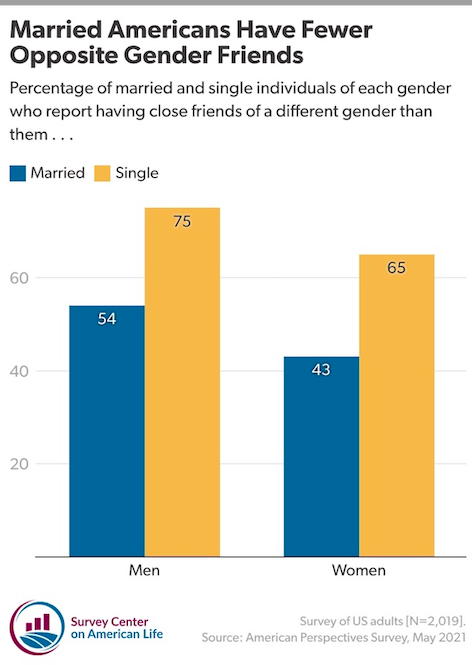 Too often in American culture, friendship is viewed as an accessory of youth. When we’re young, we are encouraged to develop friendships, but upon reaching adulthood these relationships receive far less attention. We devote the bulk of our time and energy to finding one person, a romantic partner or spouse, rather than building out a robust and durable social circle.

As a result, the time we devote to friendship peaks in our late teens and declines sharply during our 20s. Yet, study after study shows that these relationships are critical to maintain throughout our life. In fact, a recent study showed that “having supportive friendships in old age was found to be a stronger predictor of wellbeing than having strong family connections.” Moreover, we tend to be happier in our marriages when we have at least some good friends outside of our relationship, perhaps because we don’t rely exclusively on our spouse for emotional support. Our relationships are not static and require considerable energy to maintain. But the time we invest on our relationships, whether it is with a partner, spouse, or a friend, is likely the most important thing we can do to ensure a long, healthy, and fulfilling life.