The reason is that marriage is inherently stable whereas cohabitation is inherently unstable. Study after study shows that this remains the case even when we take into account all of the background factors that make people more or less likely to marry rather than merely cohabit.

But what is it about marriage itself, rather than the kind of people who marry, that might help couples stay together?

The most plausible explanation is thinking ahead!

When I proposed to my wife, 30-something years ago, there was nothing inevitable about our relationship. It was good. We liked each other. But there was always a lingering uncertainty, an unspoken ambiguity that gave both of us room to maneuver, to exit if need be. In short, we lacked a plan.

Now, I know as well as anyone that not all marriages work out. Our marriage went right to the brink shortly after our first two children were born.

But I also know that most marriages do work. The act of marriage involves a decision about the future by both people, a clear signal of intent that dispels all doubt, and an overall clarification of the plan to stay together for life that leaves no further room for ambiguity.

In short, planning ahead involves a decision that puts everyone on the same page, sends clear signals of intent, and removes any scope for ambiguity that can so easily turn into insecurity, anxiety, and bad behavior.

So, what about planning a pregnancy?

Well, in a new research study, Professor Steve McKay at the University of Lincoln and I looked at what happened to the thousands of families who have been tracked for 14 years in the Millennium Cohort Study. One of the key questions asked of mothers soon after they had their baby was: “Was your birth planned or a surprise?” We then looked at which parents were still together (“Is the father still living in the household?”) after three years and again after 14 years.

First of all, we found more planners among those who were married, were older, were happier, or who had a degree. 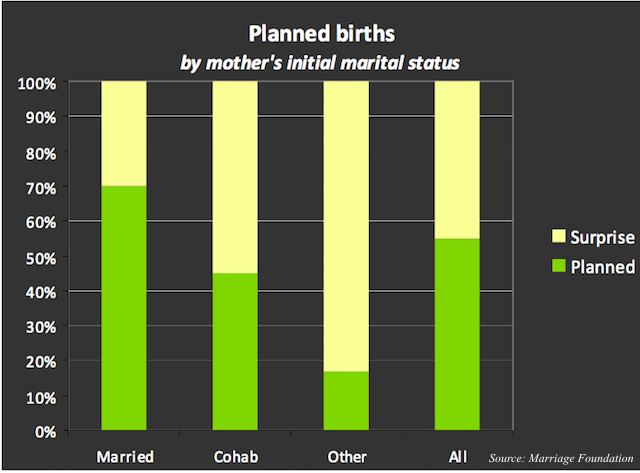 Yet regardless of whether couples were initially married or cohabiting, or how old the mother was when she gave birth, or how happy she was in her relationship, or whether she had a degree or not, and regardless of her religion and ethnicity, the odds that she would still be living with the child’s father was 35% higher after three years and 28% higher after 14 years, if she had planned her pregnancy. 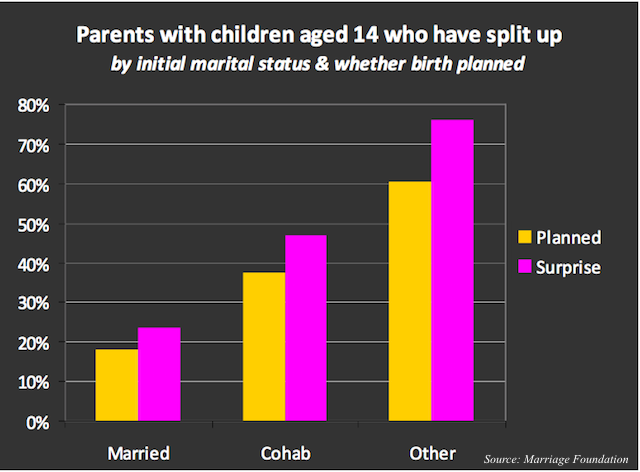 This is a pretty extraordinary finding. If your pregnancy was planned rather than a surprise, the consequences can be seen in your relationship 14 years later!

Previous American research has shown that surprise pregnancy is associated more with unmarried cohabitation and also unhappier relationships. We found this to be true for UK parents as well. Only half of the unmarried cohabiting parents had planned pregnancies compared to three-quarters of married parents. And parents who planned their pregnancy were slightly happier in their relationship when they were asked soon after their child was born.

But even when you take these things into account and compare two otherwise identical couples—married or cohabiting, happy or not—planning a pregnancy still makes a difference.

The moral of the story is this:

So, what makes us think relationships might be any different?

How Can China Avoid Demographic Disaster? Return to Religion

Births Are Back: Did Government Stimulus Fuel a Baby Boomlet?

In the Communes of the Future, What About the Children?