American fertility is near record lows, a phenomenon that demands an explanation. Previously, I’ve explored several such explanations, such as the key role played by postponed marriage. But there is another set of explanations that might have a role to play: education and residential location.

Low Fertility Is Not Because of More Education

The first way to tackle this is to look at age-specific fertility rates by educational level. In a 2017 Washington Post article about falling fertility, demographer Donna Strobino suggested that “What this is [is] a trend of women becoming more educated and more mature. I’m not sure that’s bad.”

Is this true? Is lower fertility due to increasing educational attainment among women?

A person’s educational status changes as they age, and there aren’t many 16-year-old PhDs, so to get truly equivalent estimates, we need to make some adjustments to account for the likely fertility of women of a certain degree-status before they obtained that degree. The chart below shows the total number of children likely to be born to a woman turning 15 in a given year and obtaining the given degree, from adjusted age-specific fertility rates. 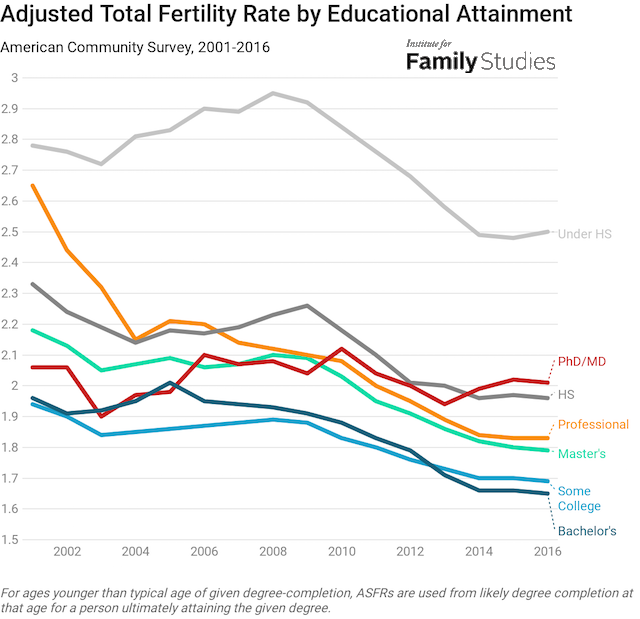 Women with no high-school degree have far more children. Beyond that, however, differences seem fairly small, and it actually seems like women with PhDs may have the next-highest birth rates.

But this data is misleading because, even with adjustments, it can’t fully account for the fact that the timing of fertility and education is closely related: women may postpone births for education reasons, or postpone education for fertility reasons. 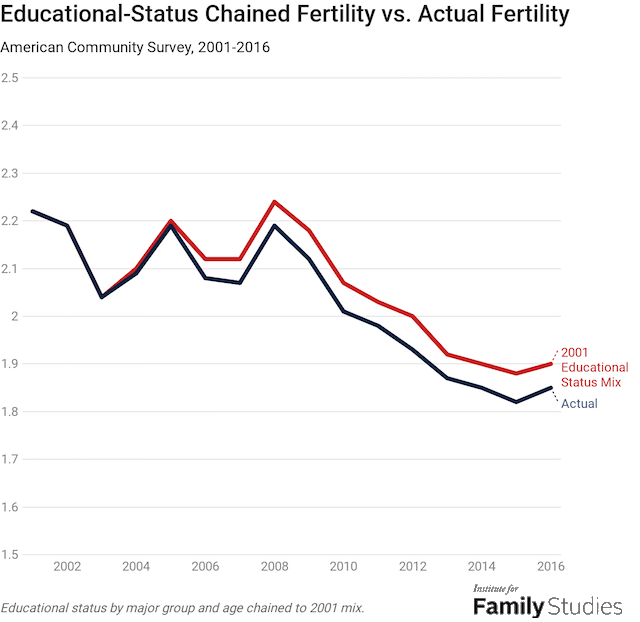 But again, this is just year-and-age-specific fertility rates by educational attainment, which may be tainted by the correlation between age, fertility, and education timing decisions. To get around that, we need to look at completed fertility. Do more educated women have lower completed fertility and are the differences big enough to be suppressing fertility overall? 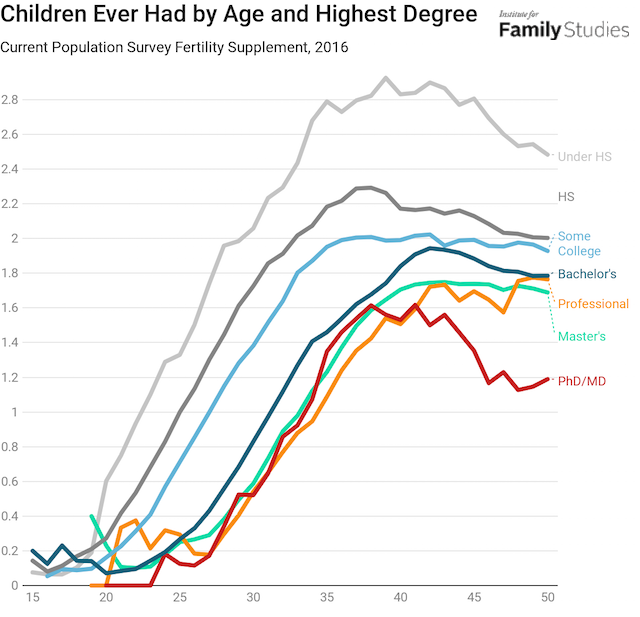 Data from the 2016 Current Population Survey shows that overall fertility completion does indeed decline with more education, and by a large amount. The difference between the most and least educated women is about 1.2 kids; even the difference between women with just a high school degree and with a master’s degree is about 0.3 kids.

It’s worth noting the very different estimates of fertility for the most educated women, particularly those with PhDs. While women with PhDs appear to have some of the highest current birth rates from the American Community Survey data, they have the lowest completed fertility. This is partly because women with PhDs have very high late-in-life fertility, which messes up the current birth rate estimates but may also reflect a change in the profile of women who obtain doctorates. With academia more and more open to high-achieving women, it may be less necessary for women to forego kids to get a Ph.D.; or it may be that the women who pursue this highest level of education today are simply more likely to want kids than previous generations of Ph.D.-holding women. While it may seem contradictory, the “highest total fertility and lowest completed fertility” results for highly-educated women are not contradictory, but rather just reflect a large amount of fertility postponement alongside a change in the mix of academic women. 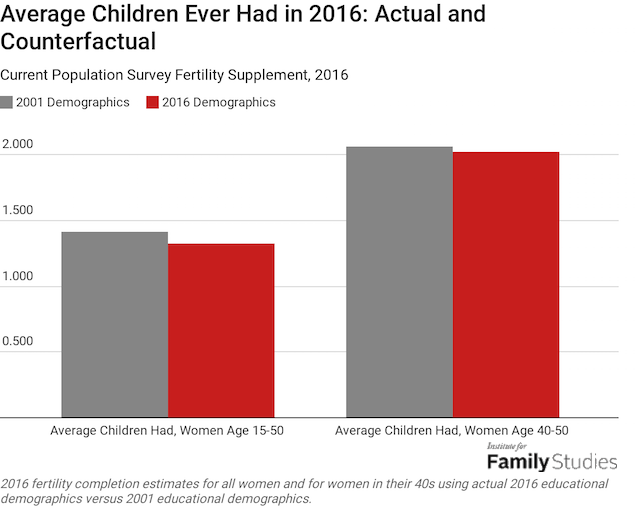 And crucially, this shows up in the completion data. Most women who get a bachelor’s degree do so around the same age: 22 to 24. Women who get master’s degrees usually do so between ages 24 and 28. Women who get PhDs usually do so between ages 26 and 33. This is because these programs have roughly-consistent lengths, and most people do them approximately sequentially. So, we can re-center the graph of women’s fertility, not around their actual age, but around the year that they finished their highest degree currently obtained. This allows us to see approximately what happens to women’s fertility when they finish their intended course of education.

It turns out, once they are out of school, most women have very similar fertility trajectories. Regardless of their degree, once women are out of school, their odds of having a kid ramp up to about 10 to 15% a year, and it remains there until they hit their 40s, when biological limitations become significant and fertility declines (negative figures here represent generational differences in prior fertility, not lost children). In other words, the measurable effect of education on birth rates is very small, and even such effect as does exist appears to be unrelated to the actual degree obtained and more related to whether or not a person is enrolled at any level.

When women enroll in school, it suppresses their fertility. This isn’t necessarily a bad thing: becoming pregnant can jeopardize a woman’s educational track, and so it is prudent for women to avoid becoming pregnant before completing their intended education.

The effect is extremely large. The graphs below show birth rates for women with a specific degree in a narrow age range around when that given degree is usually completed, broken out by whether they are continuing to be enrolled in further (usually higher-level) coursework. In other words, they show women of similar educational attainment (so a similar prior situation), and how the birth rate differs by continuing enrollment.

The fertility rate for non-enrolled women is vastly higher in all cases. Now, it is possible that becoming pregnant induces some women to accelerate degree completion and then forestalls subsequent degree-seeking, possibly distorting these statistics. But it is at least as likely that women simply postpone childbearing until they have completed their education. The result of successfully following this “success sequence,” however, is that many of these women never have the kids they want to have. Indeed, economic research has recently shown that in the U.S. and U.K. at least, most women systematically overestimate their likelihood of working in a field that will require a degree and also overestimate the number of children they are likely to have. In other words, the gender norms surrounding higher education today both place enormous pressure on women to obtain higher degrees than they are likely to use, and in turn, the time spent pursuing those degrees reduces the odds that women have as many children as they want to have.

Notably, this finding that greater time spent enrolled reduces fertility while enrolled, but only reduces lifelong childbearing if it goes on so long as to swamp much of the 20s and possibly 30s, is consistent with all the academic research on education in industrialized countries and fertility. As just one of many examples, a recent paper found that when the United Kingdom legally mandated more years of high school education, it successfully reduced teen birth rates, but did not lower the lifelong fertility accomplishment of those women.

This then raises the question: can lower fertility be explained by changes in how many women are enrolled in education? 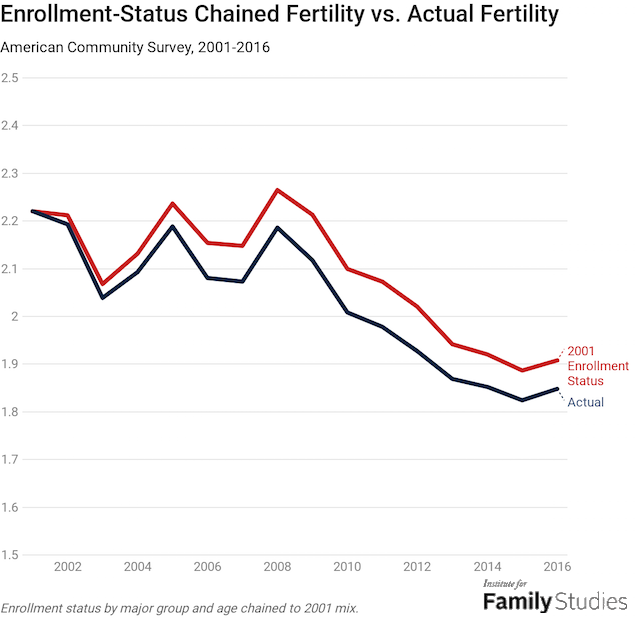 Neither the degree-attainment effect of education nor the enrollment effect can explain lower fertility. It’s true that each may have some effect, and together, it’s possible that the greater educated-ness and enrollment odds of young adult women in the 2000s and 2010s reduced their fertility by 0.05 or 0.1 kids per woman. However, while not nothing, that isn’t close to how much of the decline can be explained by changing marital patterns (80% or more), and the educational effect was mostly felt before the recession, not after.

If it’s not education, maybe it’s urban-ness? Maybe women today are more likely to live in urban areas, and that makes them have lower fertility? The image of the urban Millennial is strong: Nielsen has written on it extensively, and articles about why Millennial women have fewer kids routinely discuss urban housing costs, rather than housing costs generally.

It is true that urban areas have lower fertility. The graph below shows age-specific birth rates by urban classification. 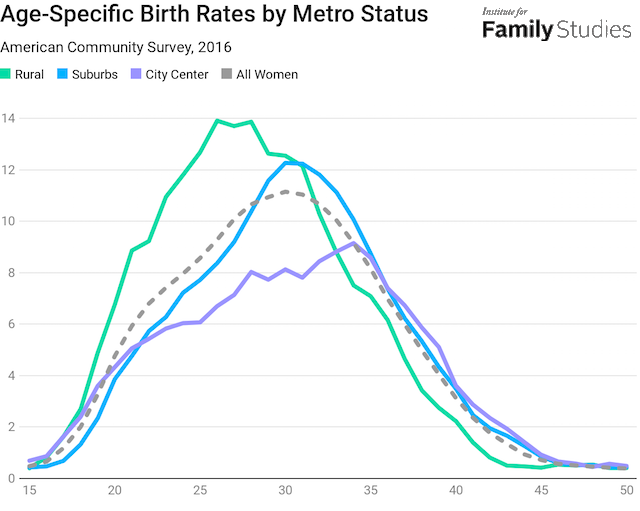 Rural people have more babies and have them younger. People in city centers have fewer babies and have them later. Suburbia is in-between. As with education, there is a bias in this data-driven by life-cycle factors, but it is much less severe than for education: urban, rural, and suburban areas all have women in every age group, and there are many moves between them that are not correlated with fertility. Furthermore, many people live their whole lives in one area.

These differences are pretty large and likely to be very real: living in an urban area could plausibly cause lower fertility if the house is too small, for example, or if there’s no garage or free parking for the minivan. It stands to reason, then, to see if changing composition of the population may have a role to play. 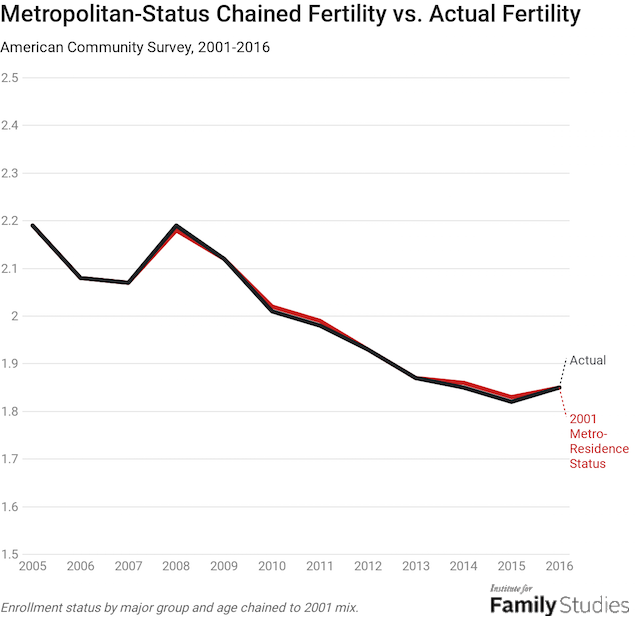 It does not. Chaining the urban mix of the population to 2001 levels has virtually no effect on total fertility whatsoever. The reality is that the urban-ness of American population just hasn’t changed very much, including for fertility-age women, and the trend in fertility rates in different areas is sufficiently similar across time that such change as has happened just doesn’t matter. This kind of large-scale population distribution variable is so slow-moving, it is unlikely to provide any explanatory power for short-run fertility trends like the recent decline.

Neither education, enrollment, nor urban-ness can fully explain falling fertility. The recent decline in fertility is not because of women becoming more educated (though they are), or because of their spending more time enrolled (although time spent enrolled can reduce fertility). Nor is it because they are living in low-fertility dense urban cores at a higher rate. The most compelling explanations for low fertility remain a combination of increasingly delayed marriage with rapidly-rising financial burdens like student loans, or spiraling rents in cities that prevent new housing construction. Until those problems are solved, fertility is unlikely to make a sustained or robust rebound.