With Mother's Day recently behind us and Father's Day coming up, it's interesting to see which countries' children are most apt to live with both their mom and their dad. It's tough to find exact and internationally comparable data on that question, but by tabulating the proportion of children living with two, one, or no parents in a few dozen countries around the world, the World Family Map Project has provided numbers that come close to answering it.

The chart below ranks countries by how likely children are to live with two parents, from 94 percent of children in Jordan down to just 36 percent in South Africa. With 69 percent of children in two-parent homes, the United States ranks a dismal 32nd of the 41 countries shown. Broadly speaking, Middle Eastern countries lead the pack, with Asian and European countries coming in next, followed by the nations of Central/South America and Africa. 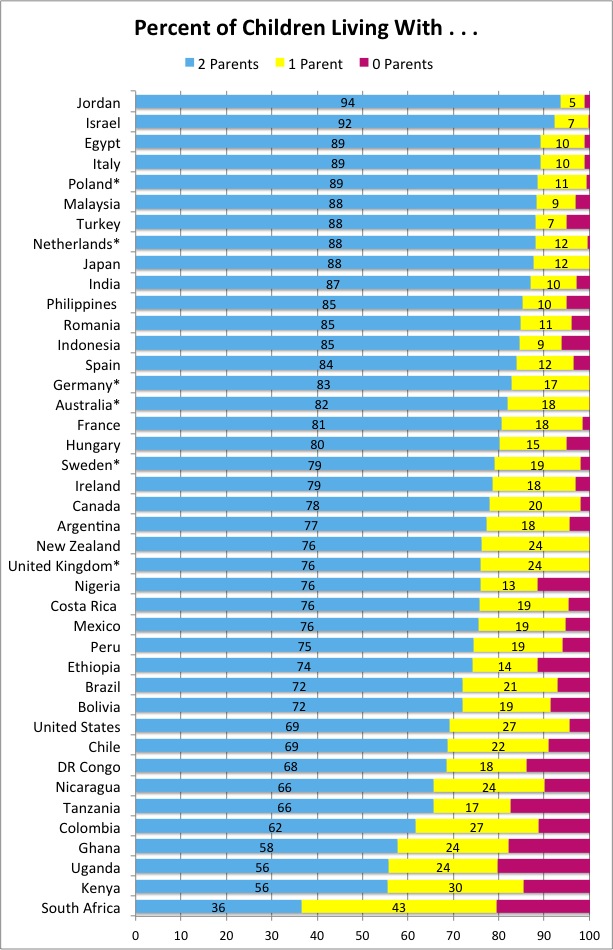 Source: World Family Map Project, 2014. Figure shows children's living arrangements in 2000–2012.
*For these countries, the percent of children who live with no parents was not measured.

In most cases, children living with just one parent are living with their mother. (In the U.S., for instance, three-quarters of single-parent households are headed by a mother.) That means that as the U.S. celebrates Father's Day this Sunday, in some countries, roughly four in ten kids are growing up without a father.

Here's another major takeaway: Although nonmarital childbearing is more common in several European countries and many South American countries than in the U.S., the instability of both marriages and nonmarital romantic relationships here means that the U.S. "underperforms" on the proportion of children living with two parents, relative to our nonmarital childbearing rate. That is, in the U.S., married parents divorce at a higher frequency, and unmarried parents break up at a higher frequency, than most of their foreign counterparts, so American kids are less apt to live with two parents than French, Swedish, Brazilian, and Peruvian kids, despite those countries' significantly higher nonmarital childbearing rates.