The COVID-19 pandemic caused many disruptions in American family life, many of them negative. But among all these disruptions, one positive trend has continued, and may even have been amplified by COVID: more kids are living with their own two married parents.

Figure 1 below shows estimates of the share of children ages 0 to 17 who were reported as co-residing with two of their own married parents across a range of U.S. Censuses and surveys like the Current Population Survey (CPS) and the American Community Survey. In particular, data for 2021 and 2022 are derived from the CPS. A more detailed discussion of the methods used in this post can be seen at my prior post reviewing trends as of 2019. 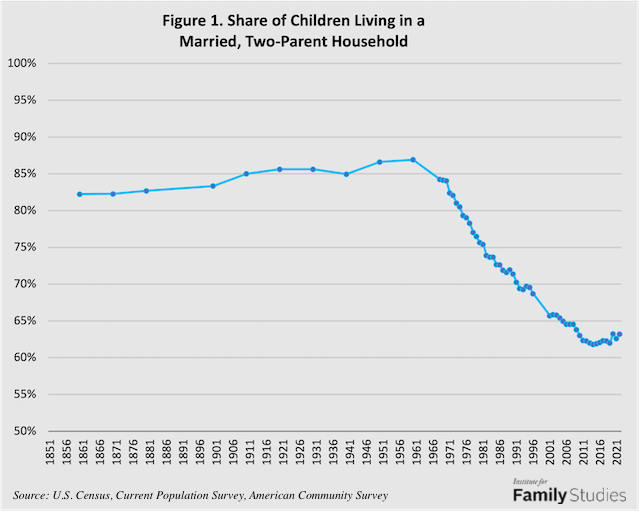 Since a low ebb around 2014, the share of kids living with their parents has actually risen by about 1.5 percentage points. While not a huge increase, that’s nothing to sneeze at, especially given what seemed to be an inexorable decline between 1960 and the early 2010s.

What’s driving this comeback of the intact nuclear family? The answer is a mixture of good and bad news. Divorce and widowhood rates have fallen appreciably, suggesting that the marriages formed in recent years may be more durable than marriages formed in the 1950s to 1990s, on average. That’s good news, as divorce can create extraordinarily damaging instability for children. But the decline in divorce isn’t the whole story. Marriage rates have fallen too; indeed, that may be a cause for the decline in divorce. In particular, poorer Americans get married far less than in the past, meaning that marriage today is more concentrated among wealthier Americans, who have had lower divorce rates for many decades.

But if marriage rates are falling, how are more kids living with married parents? The answer, it turns out, is that marriage is becoming more determinative of fertility over time, as I showed in a recent paper for IFS. Over the last decade or two, birth rates of unmarried women have fallen very rapidly, while marital birth rates have been more stable. As a result, the share of births to unmarried mothers has been stable or even declined a bit in recent years, even as there has been a rise in marriage rates for single moms. In other words, fertility rates are falling faster than marriage rates, especially among unmarried women, and as a result, the children who are born are more likely to live with two married parents.

There are, of course, large differences in the share of kids being raised by two married parents across different groups in the United States, as Figure 2 shows. 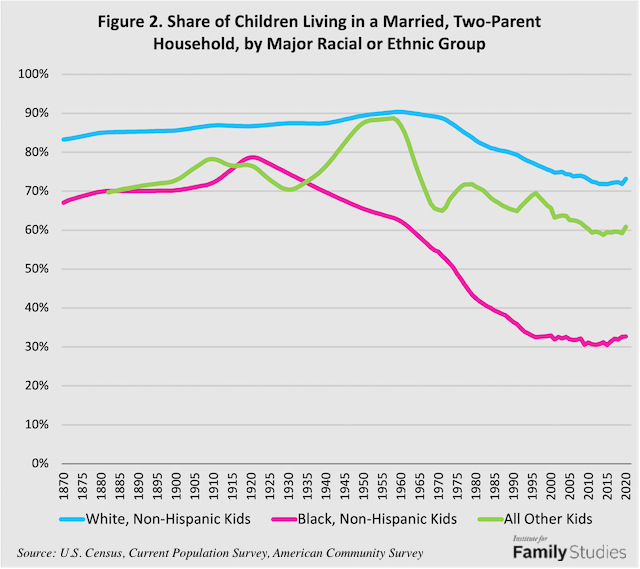 Non-Hispanic white children are by far the most likely to live with two married parents. But here, it must be noted that the largest increase in intact families has been among non-Hispanic black families. Moreover, whereas the data in Figure 1 extend to 2022, the data in Figure 2, taken from the American Community Survey, extend only to 2020. These trends can be expected to continue in the 2021 and 2022 American Community Survey data, once available.

COVID didn’t put a damper on these trends; in fact, especially for Asian and Hispanic women, COVID may have boosted the share of kids living with their parents, perhaps as lockdowns and other disruptions led to families cleaving closer together.

All in all, the decline in intact families in America appears to have bottomed out for now. The reasons for this are many: declining divorce and falling nonmarital fertility prominent among them. Naturally, these trends could change in the future, but as of now, it appears that not only did COVID fail to undo the trend of rising intact families, it may have accelerated it for certain groups.