by Jennifer Murff
Back to Blog

Dating and marriage can be a “Tinder” subject these days among Millennials, but let’s be honest, dating is hard and the struggle is real! There was once a time when chivalry existed, men actually initiated relationships, and being pursued by a gentleman was considered an honor for a woman. Late night coffee house talks, sunset beach walks, and dreams of a joint future once created an intimate environment that laid the foundation for sparks to ignite, hearts to fuse, and relationships to develop.

But today, many Millennial women are trading dating with future intent for instant gratification and pleasure. Young adults think they can pick and chose the perfect mate by viewing a picture of who’s hot and who’s not, all the while leaving character, values, and depth aside. The reason why online dating sites such as Tinder, Hinge, or OkCupid have become so popular among young people is that they take risk and vulnerability out of equation. Consequently, we live in an age where many women are trading life-long intimacy through marriage for temporary pleasure, and where the hookup and resulting walk of shame are more likely than a walk down the isle.

But most Millennial women still want to be married. In fact, in a recent Gallup survey, 56 percent of unmarried Millennials said they want to marry one day, but are choosing to delay marriage. The question is why.

Too Much Debt. One reason why Millennials are delaying marriage is outstanding debt. Unlike previous generations that married young, the average college graduate is entering the workforce with an average of $30,000 of student loan debt. In fact, finances are the third most common reason Americans cite for why they are not yet married.

Lack of Marriageable Men. For women who want to marry and choose to wait, inevitably this means that the pool of eligible bachelors is becoming smaller by the day. In 2012, there were 34 percent more women than men who graduated from American colleges, and the U.S. Department of Education expects this gap to continue to increase through 2024 (see chart below). This education gap means that young women may need to be more open to finding suitable matches with men who have careers or educational backgrounds that vastly differ from their own—but who are a compatible match in other areas, such as faith, values, and worldview. 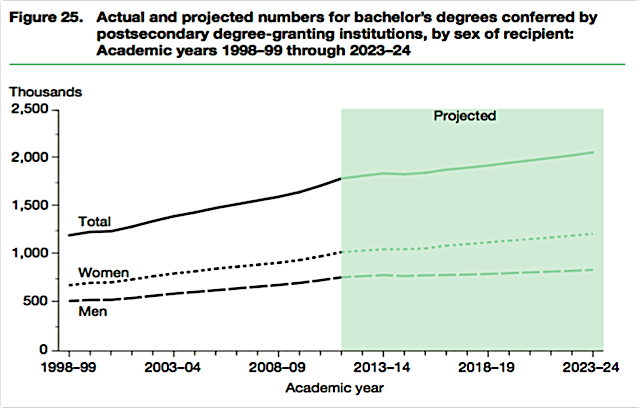 Fear of failure. Another reason why Millennials are choosing to delay marriage could be more foundational—a fear of divorce. This makes sense considering that a significant percentage of Millennials grew up in broken homes. For example, according to a recent Pew survey, 38 percent of Millennials had divorced or separated parents.

Perhaps that is why more Millennials are choosing cohabitation over marriage. Millennial women often think that cohabiting is a step towards marriage, yet studies show that it is often a step towards relationship instability and can increase the risk of divorce after marriage.

Marriage has gotten a bad reputation among Millennial women, as its often portrayed by the culture as the dream smashing, life altering, and bank accounts draining institution that will leave you lonely and miserable. What Millennials need to hear instead is the truth about marriage, which is associated with a wide range of benefits for both men and women, including financial security, lifetime satisfaction, and stability.

For Millennials to value marriage, there must be a rebranding that will engage them at the grassroots level. One way to do this is by using digital messaging. Whoever controls the message, controls the meaning. Organizations can influence the Millennial generation with a positive message about marriage by using micro-targeted digital campaigns that communicate that marriage is relevant, fun, empowering, exciting and safe. A number of organizations are attempting to change the narrative on marriage, including Millennials for Marriage and I Believe in Love, which use digital media to share real stories about relationships and marriage from real people in an effort to redeem the beauty of marriage among the masses.

But digital media can never take the place of relationships, which is why another important tool for rebranding marriage is personal modeling. There is a saying “I do not care how much you know until I know how you care.” Millennials in particular value mentorship, and modeling healthy (not perfect) marriages is a powerful way to change how Millennials see marriage, simply by more married couples living out its beauty in their daily lives.

New York Times columnist David Brooks writes: “marital happiness is far more important than anything else in determining personal well-being.” Today, it can be difficult for many Millennials to choose marriage over cohabiting or delaying marriage. However, if we begin to change the narrative about marriage among young people, perhaps more Millennial women (and men) will be able to overcome their fears about marriage and embrace it as the gift that it is.

Jennifer Murff is president of Millennials for Marriage.