Do Today's Teens See Marriage and Children in Their Future?

In 2019, the New York Times published responses from U.S. students to a set of writing prompts, including one asking: “Do you want to get married one day?” While the responses varied—with some students expressing positive views of marriage—many of the teens embraced popular relationship myths.

As one teen from Texas wrote:

I feel like nowadays it’s not really as important to get married, especially for people of my age and generation. The reason being is that we are being taught by our parents and educators that our education should come first in order to have a stable life financially and career wise, which causes many people to neglect the thought of marriage. Not only that, but society has also made marriage seem like it should be like the least important thing for a person to think about.

Another teen from Illinois explained:

I do have dreams of getting married one day, but it scares me. A lot. I have many ambitions in life, but I do feel that sometimes they contradict each other.

And a student from North Carolina put it this way:

Asking if I want to get married someday is a poor question in my opinion. Marriage is just a title, a contract; it only begins to matter once love is in the picture … I think it’s acceptable to live with a romantic partner without having plans to get married.

While these are just snapshots of how a few teens feel about family life, they seem to confirm what we are seeing in terms of young adult relationship behavior today. Marriage is declining, birth rates are down, and cohabitation is increasing, making the future of American family life appear as bleak as these students’ statements. But how do the majority of teens really feel about getting married and having babies? Is marriage still on their radar, or is cohabitation surpassing marriage as the ideal relationship goal? Two recent reports shed some light on these questions and more, including which factors affect teens' expectations for marriage, cohabitation, and childbearing.

The first is a new research brief from the Marriage Strengthening Research & Dissemination Center (or MAST Center), authored by Katherine Graham, Karen Benjamin Guzzo, and Wendy D. Manning. The brief is based on their analysis of the 2017-2019 National Survey of Family Growth (NSFG), which asked about 2,000 teens ages 15 to 19 about their expectations and intentions for marriage, cohabitation, and having kids. Another brief from the National Center for Family & Marriage Research (NCFMR) explored more recent findings from the Monitoring the Future survey of high school seniors in 2020.

Here are four highlights from both reports on teen expectations for marriage and family formation.

1. The majority of teens expect to cohabit, marry, and have children one day.

As the MAST Center authors explain, the changes we are seeing in marriage and family life today “do not appear to reflect a lack of interest in marriage or family formation among young people.” In fact, according to their analysis of the NSFG, 95% of teens ages 15 to 19 expect to get married, nearly 80% expect to cohabit, and 87% plan to have children someday. 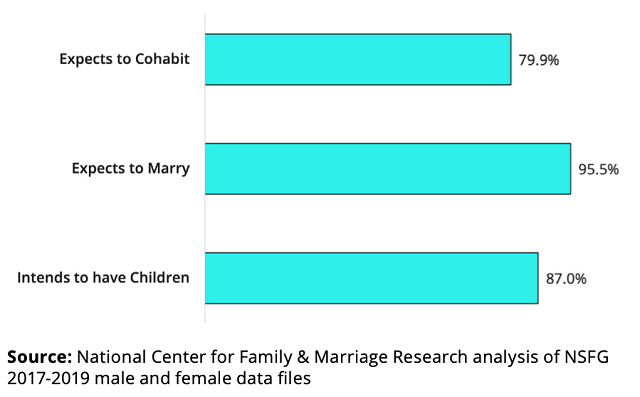 Interestingly, when it comes to cohabitation, teenage boys are more likely than girls to say they expect or intend to cohabit: 84.1% of teen boys expect to cohabit in the future compared to 75.4% of girls (not shown here).

2. Teens may be growing more doubtful about marriage in their future, even as they increasingy embrace cohabitation as a “testing ground" for marriage.

The NCFMR also notes that high school seniors appear to be growing less certain about whether or not they will get married one day. The Monitoring the Future survey asks 12th graders, “Which do you think you are most likely to choose in the long run?” “get married,” “not get married,” or “no idea.” The percentage of high school seniors who “have no idea” about whether marriage is in their future has risen in recent years—from 19% in 2017 to 23% 2020.

Meanwhile, teen attitudes about cohabitation as a "testing ground" for marriage have steadily increased over time. In the Monitoring the Future survey, high school seniors are asked to agree or disagree with the following statement: “It is usually a good idea for a couple to live together before getting married in order to find out whether they really get along.” The percentage of teens agreeing with this statement increased from 40% in 1976 to 69% in 2020 (down slighly from a peak of 72% in 2017).

Previous research has shown that teen relationship expectations are influenced by their parents' relationship experiences. In the MAST Center brief, the authors note that “most teens, regardless of family structure, expect to marry, cohabit, or have children at some point in the future,” but there are some interesting differences. As the figure shows below, teens who lived with both biological parents are the most likely to expect to marry and least likely to expect to cohabit, though most of the differences are small (“any other parental situation" includes single-parent and grandparent-led families). 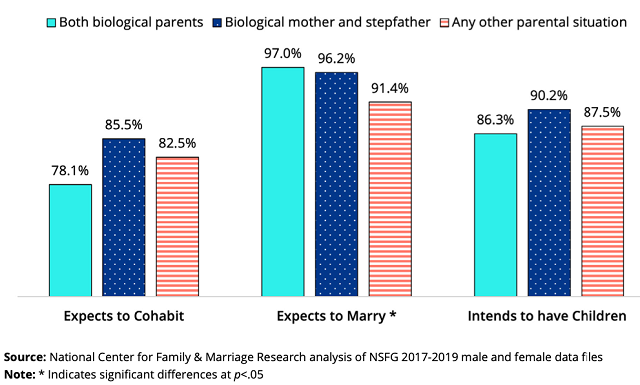 How often teens attend worship services is more strongly linked to their expectations about their future family lives, particularly when it comes to cohabitation. As shown in the figure below, highly religious teens are slightly more likely to say they expect to marry and have children compared to less religious teens, but they are significantly less likely to expect to cohabit in the future. For example, 87.2% of teens who attend worship services less than weekly expect to cohabit one day, compared to 70% of teens who attend church weekly or more.

The encouraging news from these recent reports is that most teenagers today still want to get married and have a family one day. At the same time, it is troubling that cohabitation is becoming a major part of most young people's futures. The MAST Center notes that by age 30, 62% of men and women will have cohabited with at least one partner, while less than half (or 45%) will have married. This means that more young adults who do marry will come into their marriages having lived with at least one partner, and some will have cohabited with several. Given that research continues to confirm the risks of cohabitation to marital quality and stability, this could reduce their chances of forging healthy and lasting unions for themselves and their future children. This should motivate parents, educators, and faith leaders to do a better job communicating why marriage surpasses cohabitation, and guiding young people toward steps that will help them achieve the family life they want.