Marriage Surpasses Cohabitation in Relationship Quality, But Most Americans Don’t Seem to Know It

The next time a young person you know mentions moving in with a romantic partner, you might consider asking him or her to contemplate the following questions that IFS senior fellow Bradford Wilcox recently tweeted:

Wilcox was responding to a new Pew Research Center report on cohabitation and marriage. The report, which is based on Pew’s American Trends Panel survey of over 9,000 married and cohabiting adults, does an excellent job of highlighting some of the key relationship quality differences that persist between marriage and cohabiting relationships, despite the increasing prevalence of shacking up. The Pew survey also shows that most Americans, especially younger generations, increasingly embrace popular myths about cohabitation that are not reflected in the reality of these relationships or backed up by research.

Marriage Has an Edge in Trust, Satisfaction, and Closeness

Pew surveyed U.S. adults about the trust they felt in their partner’s faithfulness, honesty, financial responsibility, communication skills, and whether a partner or spouse will “act in your best interest.” The results are telling. “By double digits,” as the report puts it, higher shares of married adults expressed trust in their partner’s faithfulness, honesty, and financial responsibility, and believed that their partners would act in their best interest, compared to cohabitors. For example, 84% of married adults said they trust their spouse to be faithful, versus 71% of cohabiters. And 68% of married adults believed their spouse to be truthful, compared to 52% of cohabiting adults. 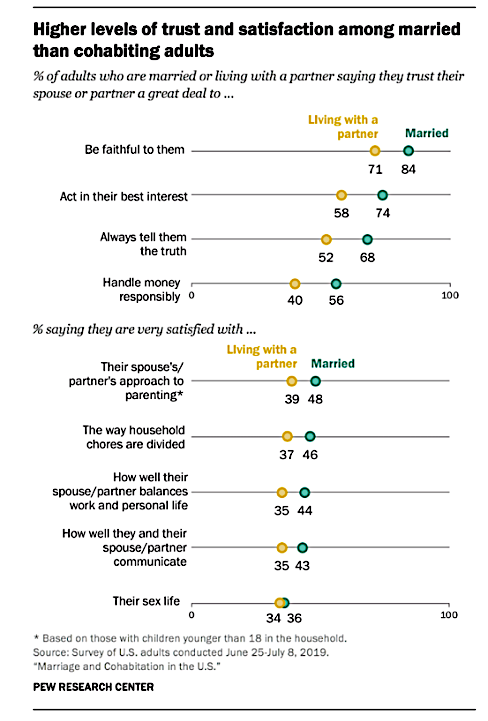 The same is true regarding relationship satisfaction, with the exception of sexual satisfaction (which is about the same for both). As second half of the chart above shows, married adults were more satisfied with their spouse’s parenting skills, the division of household chores, how their spouse manages work-family matters, and their communications skills.

Marriage also has an edge when it comes to how close one feels to a partner: 78% of married adults said they “feel closer to their spouse than to any other adult in their life,” compared to only 55% of cohabiting adults who said the same of their live-in partner.

Importantly, these findings regarding married adults’ higher levels of satisfaction, trust, and closeness held even after Pew controlled for things like gender, age, race, religion and educational attainment.

As University of Utah sociologist Nicholas Wolfinger tweeted in his response to these findings, the Pew data "break no new ground but confirm existing studies." Indeed, the report echoes a large body of research showing that married adults consistently report higher-quality relationships than cohabiting adults. Most recently, the “iFidelity survey” by the National Marriage Project and the Wheatley Institution found that married adults were significantly more likely than cohabiting adults to report higher relationship stability, commitment, and satisfaction.

The Pew findings certainly do not surprise IFS senior fellow Scott Stanley, who has been studying cohabiting relationships with his colleagues at the University of Denver for years. “Because cohabiting relationships are not as vetted (by that I mean, both partners having and clarifying a high level of commitment), they are more likely to be asymmetrical in commitment,” he told IFS. “People are going to be less trusting and less satisfied when commitment is not mutually high.” He continued, "When it comes to something like trust, one might grow in trust of a partner if you see that partner being willing to take the strong, public stand about his or her commitment to a future together. In that way, marriage could lead to higher levels of trust."

Why People Cohabit or Marry Matters, Too

Pew also examined the reasons why American adults decide to cohabit or get married, which, it turns out, are crucial to understanding the differences in the quality of cohabiting relationships compared to marriage. While both married and cohabiting adults cited love and companionship as their top reasons, married adults were more likely to cite “love,” and cohabitors were more likely to cite "companionship." 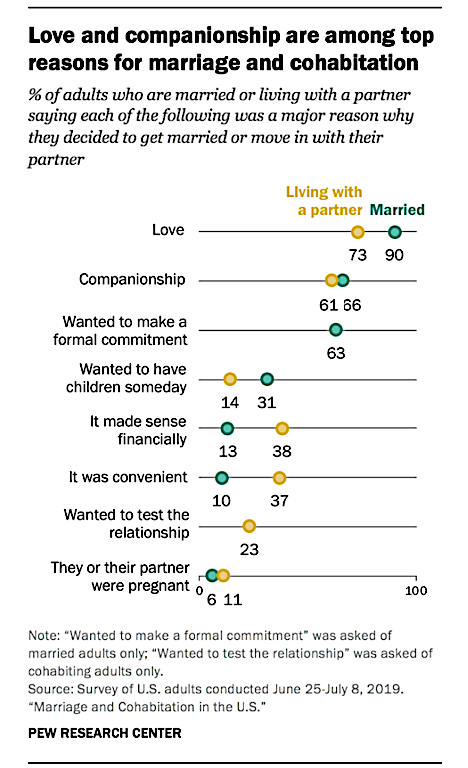 Perhaps the biggest takeaway from the Pew survey is that the majority of American adults, especially young people, continue to embrace beliefs about cohabitation that are out of touch with the research on cohabiting relationships.

Take, for example, the fact that nearly half of all adults (48%) said that those who live together first have a “better chance” of a successful marriage (38% said it "doesn't make much difference"). Younger Americans were the most likely to embrace the view of cohabiting as a path toward marital success, with 63% believing it to be the case. Interestingly, older adults were more likely to believe that cohabiting prior to marriage doesn't matter much to future marital success. 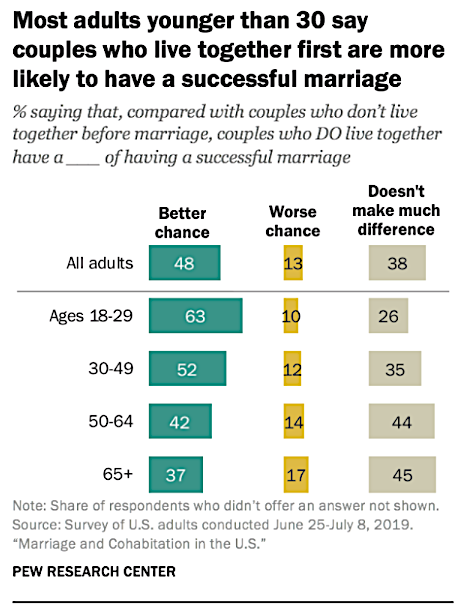 This idea that cohabiting before marriage can give your future marriage a boost is tied to another popular view: the myth that cohabiting is a good way to “test a relationship. The Pew survey found that nearly half, or 44%, of all cohabiting adults saw it as a step toward marriage, while this belief was embraced by 66% of married adults in the survey (who had live together prior to getting married but were not engaged when they first moved in).

The problem is that research on cohabitation shows otherwise. As Dr. Stanley and his research partner, Galena Rhoades put it in an IFS blog post, “testing a relationship is probably the worst reason to cohabit.” They go on to explain: “many people who are thinking about testing their relationship by cohabiting already know, on some level, what the grade of that test may be; but they are hoping that the answer looks better over time.”

Furthermore, couples who cohabit before getting married may very well be increasing their later risk of divorce, especially if they cohabit with more than one partner. A wide range of studies, including those conducted by Drs. Stanley and Rhoades, have linked cohabiting prior to marriage to lower quality and unstable relationships. Their research finds that for most couples, living together makes it difficult to know if the person is the right “one,” increases discord, and can "engrain a 'what if' mentality" into the relationship that can harm later marriage. And, according to Dr. Stanley, this research “shows that living together prior to being either married or engaged is associated with higher risk for lower relationship quality and divorce.”

In another troubling finding from the Pew survey, nearly 60% of adults agreed that, “couples who are living together but not married can raise children just as well as married couples.” 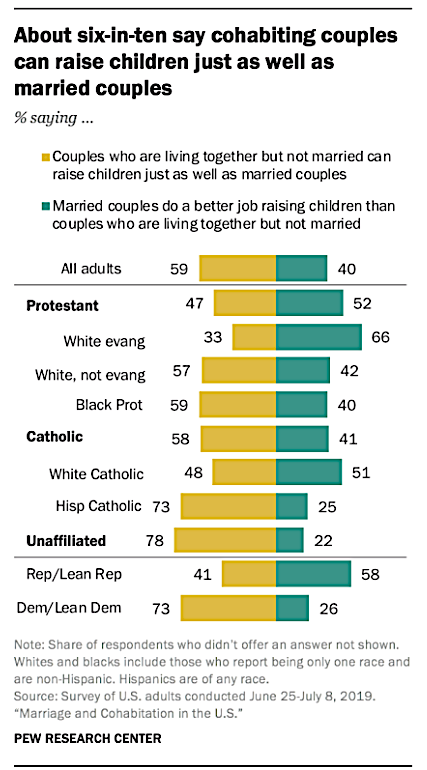 Here again, the research is clear that cohabitation does not compare to marriage when it comes to the stability married parenthood provides a child. The 2017 World Family Map revealed that in the United States and 16 countries across Europe, cohabiting parents are significantly more likely to break up by a child’s 12th birthday than married parents.

As to why marital unions continue to surpass cohabiting relationships in relationship quality and stability, Dr. Stanley points back to commitment.

“Marriage is a type of forcing cone about commitment,” he explains. “While marriage is not perfect and there are no perfect marriages, marriage makes it somewhat more likely that two people will be more highly committed and will have mutually determined that to be true. It's a clarifying bar to get over.”

The Pew report confirms that adults who make the public vow of “‘til death do us part” consistently report the most satisfying relationships. It also shows that we are doing a poor job of communicating the facts about cohabitation versus marriage, especially to young people. At a time when cohabitation appears to be gaining ground among younger generations, marriage is still the best means to a life-long, faithful union that is the most likely to provide couples and their children with a stable and flourishing family life.

Alysse ElHage is Editor of the Institute for Family Studies blog.