The Share of Never-Married Americans Has Reached a New High

America is the middle of two simultaneous trends related to marriage. Marriages today are more stable, thanks to the steady decline of divorce rates since the 1980s. At the same time, however, a declining share of Americans marry. In 2018, a record 35% of Americans ages 25 to 50, or 39 million, had never been married, according to a new Institute for Family Studies (IFS) analysis of U.S. Census data. The share was only 9% in 1970.

Previous research suggests that marriage rates tend to fall during a recession. With the Covid-19 stay-at-home order, and the financial fallout from the pandemic, we are most likely to see the share of never-married adults break new records in the near future. 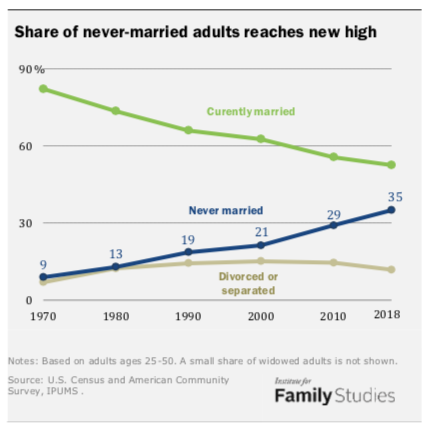 Many factors are related to the rise of never-marrieds. Young adults have taken their time to enter marriage. The median age for first-time marriages today is 28 for women and 30 for men. Back in 1970, Americans typically got married in their early 20s. Also, young adults today often live with their partner before getting married. Cohabitation is seen as an alternative living arrangement for couples, even if they do not plan to get married.

Even though marriage delayed does not necessarily equal marriage forgone, with more people delaying marriage, a rising share of Americans may end up not getting married at all. An earlier Pew Research Center report projected that 1 in 4 of today’s young adults may never marry, if the current marriage trends continue.

Lower-income Americans are much less likely to marry than those with more economic resources today. More than 4 in 10 prime-age Americans in the bottom third income bracket (42%)  have never been married, compared with 23% of Americans in the top third income bracket. This marriage gap by income did not exist in earlier years. In 1970, when 7% of Americans ages 25-50 were single, working-class and poor Americans were just as likely to enter marriage as more affluent Americans. The gap that started in the 1990s has exacerbated since 2000. 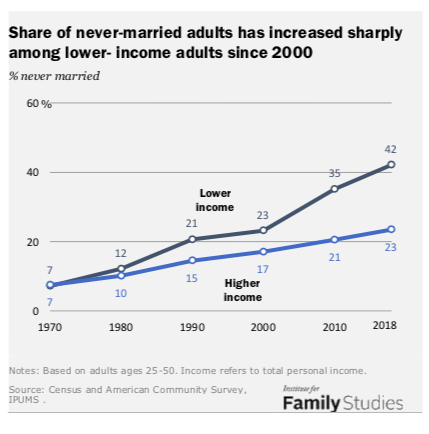 Instead of family income, total personal income from the previous year is used for the income distribution calculation in this report. This helps to level the field, given that married adults tend to have higher family incomes than single adults. Meanwhile, for married stay-at-home parents, or someone with a spouse who earns much more money, using personal income may underestimate the association between income and marriage. Separate analyses show that the marriage gap by income is much wider if family income is used.

The marriage divide also cuts along educational lines, although the pattern has been reversed in recent decades. As late as 2000, college-educated Americans ages 25 to 50 were more likely than their peers who did not have a college degree to be in the never-married camp. However, the table has turned since then. Nowadays, Americans with a college degree are more likely to enter marriage than those without a college education.

What could have contributed to the sharp rise of unmarried adults among less advantaged Americans in recent decades, especially since 2000? And how might the COVID-19 pandemic affect marriage formation in the upcoming years?

Using data primarily from the U.S. Census Bureau, this research brief focuses on the roles that income, work, and education play in marriage formation. Views from singles regarding the reasons they are not yet married and about their ideal spouse are also incorporated from a recent IFS survey in California. The California survey provides the most updated data on the topic, and findings from the survey are largely consistent with previous findings in the national survey.

Given the gender differences in mate selection, this research brief also looks at how a lack of stable jobs may particularly affect single men in the marriage market. Additional information regarding the link between political ideology, religion, and marriage are also presented and will be featured in a special report on this blog tomorrow. 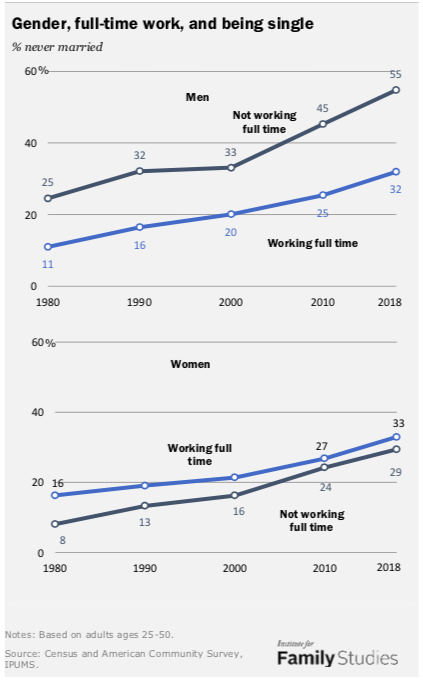