The Partisan Divide in Marriage and Family Life: Four Takeaways from the 2018 American Family Survey

In our increasingly divided nation, Americans are splitting along party lines in a number of areas, including marriage and family life. There are now striking connections between partisanship and marriage, with Republicans more likely to be stably and happily married than Democrats and Independents. And even though I’m a conservative, the ties between marriage and partisanship concern me (more on that below). These are two conclusions I came to after reading the results of the 2018 American Family Survey, sponsored by the Deseret News and the Center for the Study of Elections and Democracy.

As I read the new report based on the survey, I was struck by four key points about the relationship between marriage and partisanship.

1. When it comes to public support for President Donald Trump, it turns out the marriage gap looks almost as large as the gender and education gaps. This is particularly true for men. Indeed, 50% or more of college-educated and less-educated men who are married approve of Trump, whereas only 40% or less of their unmarried peers approve of him. As the table below indicates, these gaps are about as large as the gender gap and are bigger than the education gap. This marriage gap has been largely ignored by the media, but it’s worth thinking more about why marital status is so closely connected to partisanship in America.

2. Conservative Americans are not hypocrites on family values. This report also underlines a point I’ve made before. There is a thesis put forward by Naomi Cahn and June Carbone that blue families are stronger and more stable than red families. Nicholas Kristof took up this idea in the New York Times, writing that “conservatives thunder about ‘family values’ but don’t practice them,” adding that it is actually “liberals [who] practice the values that conservatives preach.” The big problem with this line of argument: it doesn’t ring true—at least at the individual and household levels.

This report shows that Republicans/Conservatives are much more likely to be married, to be in drama-free relationships, and to attach greater importance to marriage and parenthood, compared to other Americans. Take for instance: 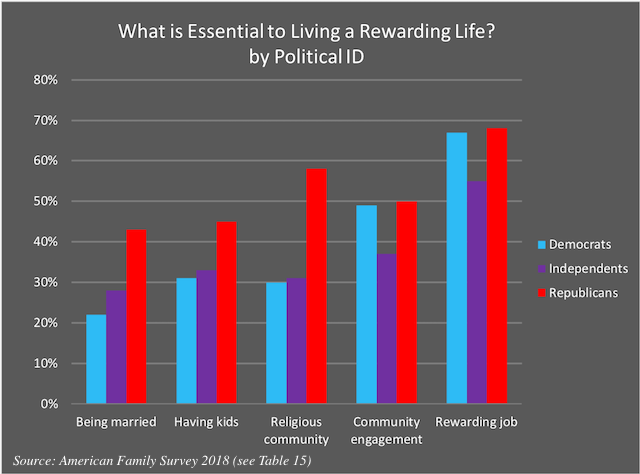 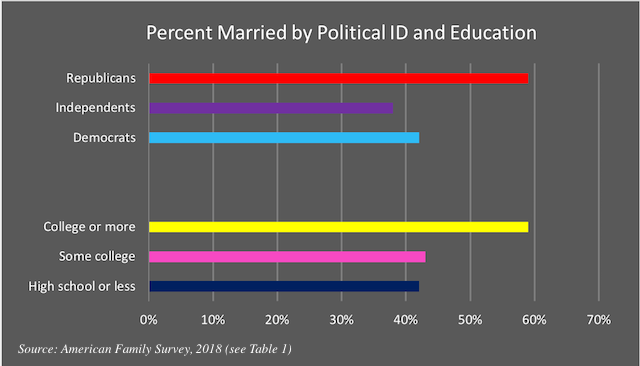 4. The Republican advantage in marriage raises questions about the necessity or comparative strength of the egalitarian marriage . The Republican advantage in marriage also makes me a bit skeptical about my friend Richard Reeves’ argument that egalitarianism is a necessary ingredient in today’s marriages. Like Cahn and Carbone, he has argued that one reason that upper-middle-class marriages today are more successful than the marriages of working-class and poor couples is that they are more egalitarian.

But the Republicans’ comparative advantage in the marriage department makes me wonder about this thesis. Why is it that Republicans and conservatives generally report more marital happiness and stability than do other Americans? Is it because they are more egalitarian? I doubt that.

I suspect, instead, that it’s related to a family focus on the part of more conservative husbands—especially religious ones—and to higher levels of joint marital commitment on the part of Republican spouses. In any case, partisan patterns in marriage today suggest that a 50-50 model of marriage isn’t a necessary ingredient for making a good marriage. It certainly may be necessary for egalitarian-minded couples, but that’s not everyone.

The 2018 American Family Survey, then, tells us that Republicans are more likely to be married, to value marriage, and to be in no-drama relationships. It parallels other findings on this score. And, certainly, these patterns in partisanship are partly about generational, racial, religious, and socioeconomic differences between the parties. That is, I’m not making strong claims about causality here when it comes to partisanship and marriage.

There shouldn’t be a partisan divide in institutionalizing lifelong love. But here we are.

W. Bradford Wilcox is Director of the National Marriage Project at the University of Virginia and a Senior Fellow of the Institute for Family Studies. He serves on the Advisory Board of the American Family Survey.