Red Families vs. Blue Families: Which Are Happier?

Blue families are stronger and more stable than red families. Until recently, this was the conventional wisdom in the media and the academy. But this belief has been challenged by new reports in Family Studies and the New York Times. At least at the regional level, blue families—that is, families in areas that vote Democratic in presidential elections—do not have an advantage. It turns out that, on average, more conservative counties across the country have more marriage, less nonmarital childbearing, and more family stability for their children than do more liberal counties.

Some scholars haven’t been persuaded by the new research. For instance, economist Noah Smith, who has argued that “liberal morality is simply better adapted for creating stable two-parent families in a post-industrialized world,” wondered if the new red families vs. blue families story held up at the family level: in his words, “Try doing family-level studies” of the red vs. blue divide. We have taken up Smith’s challenge in this Institute for Family Studies research brief.

Our analysis of adults aged 20 to 60 in the 2010-2014 General Social Survey (GSS) casts doubt on Smith’s contention. Forty percent of Democrats are currently married, versus 57 percent of Republicans.1 Forty-seven percent of ever-married Democrats have been divorced, compared to 41 percent of ever-married Republicans. These data are cross-sectional, so we cannot be sure about the causal relationship between party identification, marriage, and divorce.2 But the data lend no empirical support to the view that blue families are more stable.

Instead, the GSS data and our earlier research suggest that an elective affinity—based on region, religion, culture, and economics—has emerged in the American electorate: married people are more likely to identify as Republican and unmarried people are more likely to identify as Democratic. Given that marriage generally stabilizes family life, and that there is an affinity between marriage and conservatism, it may well be that it is actually conservatives and conservative regions that are better at fostering “stable two-parent families in a post-industrialized world.” More research is needed to investigate the effect of ideology and region on family stability over the life course.

But stability is only one measure of the character of family life. We further took up Noah Smith’s challenge by exploring how partisanship is related to another important family-level outcome: marital quality. The benefits of a happy marriage include better physical and psychological outcomes for adults, and, for couples who have children, better emotional and marital outcomes for their sons and daughters. Our main question in this research brief is simple: are red or blue spouses happier? 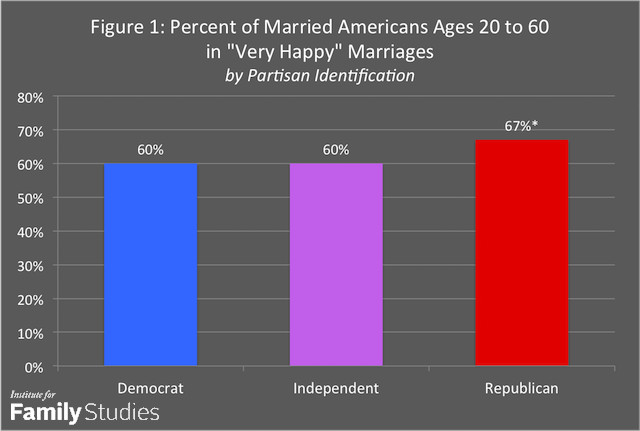 According to our analysis of the 2010-2014 GSS, red spouses are happier than blue spouses in their marriages. Married men and women between 20 and 60 years of age who are Republican are seven percentage points more likely than Democrats (and independents) to say they are “very happy” in their marriages. This is a statistically significant difference in marital quality.

Why are married Republicans happier than their Democratic counterparts? Perhaps the partisan divide can be accounted for by differences in the demographic and cultural composition of each party. After all, prior scholarship has found that marital quality varies by sex, race/ethnicity, education, and religiosity. In turn, each of these factors is linked to partisan identification in America. Women, minorities, and less religious Americans are more likely to identify as Democrats. By contrast, men, whites, and more religious Americans are more likely to identify as Republicans. (We also find a modest Republican advantage in college education in the 2010-2014 GSS.) 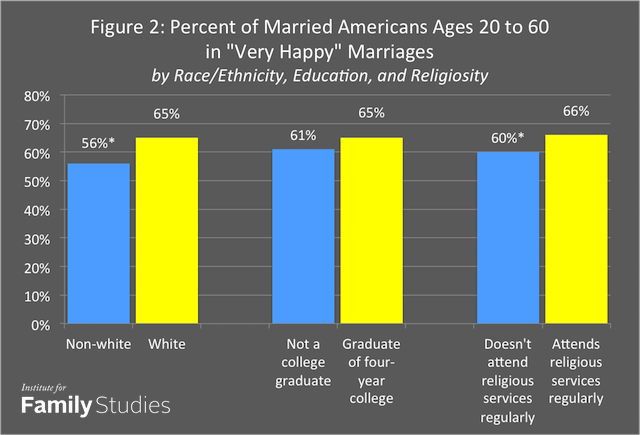 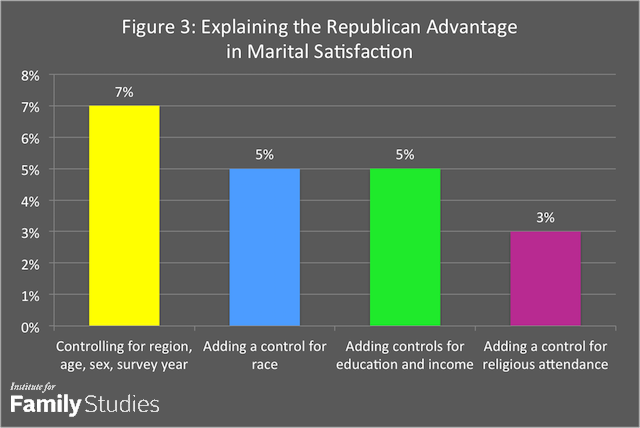 As the figure above indicates, race and ethnicity clearly contribute to the red-blue divide. Once we factor in differences in marital quality by minority status, the Republican advantage shrinks. This suggests one reason Republicans have happier marriages is that, as a party with a larger share of white couples, they are less likely to face the discrimination, segregation, and poverty that minority couples often experience in America, all of which can compromise the quality of married life.

What about education and income? Given the centrality of social class in predicting better family outcomes for Americans, might the partisan difference in marital happiness be linked to these measures of socioeconomic status? No. The figure above suggests that socioeconomic differences do not help explain the Republican advantage.

In sum, this Institute for Family Studies brief indicates that married Republicans are more likely than married Democrats to say they are in very happy marriages. Partisan differences in race/ethnicity and religious practice account for more than half of the GOP advantage, but we cannot explain the remainder of it. Perhaps Republicans are more optimistic, more charitable, or more inclined to look at their marriages through rose-colored glasses. But what we do know is this: Democrats do not enjoy an advantage over Republicans when it comes to the quality of their marriages. Further, the General Social Survey indicates that Republicans are also more likely to be married, and less likely to be divorced, than their Democratic fellow citizens. Our analysis of family-level data on marriage, divorce, and marital quality provides no support for the theory that blue families are superior to red families in America. Instead, the evidence suggests the contrary. 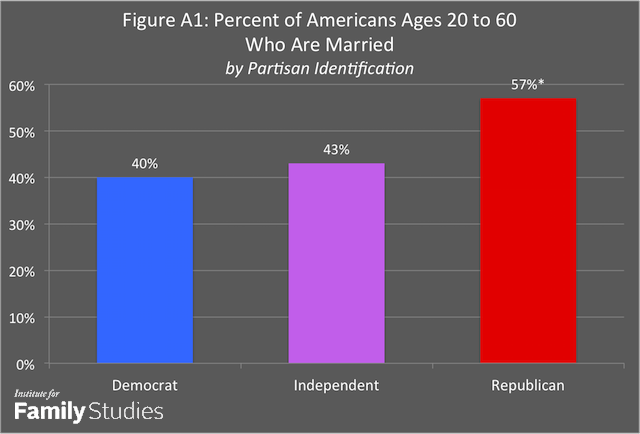 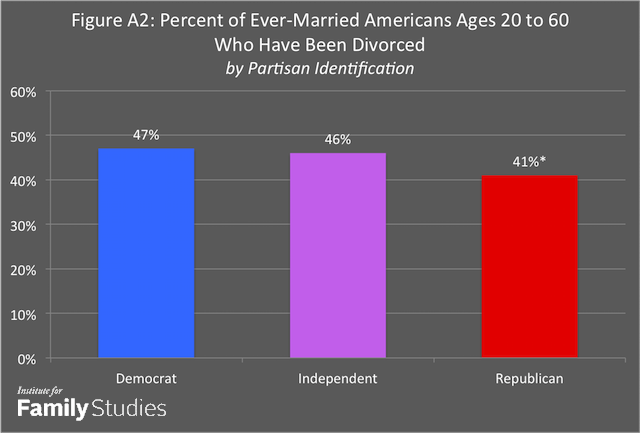 2. We are aware of no published longitudinal research tracking individuals’ partisan identification, marital quality, and family stability over time. Nevertheless, in exploring the association between geography, partisanship, and marriage patterns for today’s young adults at the county level, the Upshot found the following: “The more strongly a county voted Republican in the 2012 election, the more that growing up there generally encourages marriage.”