In an election post-mortem interview, progressive election analyst David Shor claimed that increasingly delayed marriage and childbearing have given Democrats an electoral advantage and that these changes in family formation are “reason for hope” for Democrats. Indeed, the recent presidential election revealed sharp divides in American society: between urban and rural, men and women, Black and white, conservative and liberal. Less recognized is the way in which different approaches to family life also shaped the 2020 presidential election. Whereas Americans on both sides of the aisle once shared a basic model of family, today our political divisions show up quite literally at birth, with conservatives having (and desiring to have) considerably more children than liberals. We are not only divided by our political visions, but also by our values and behaviors around childbearing and childrearing; that is, by our visions of family life.

One way this shows up is fertility. In this election, the association between fertility rates and voting patterns was crystal clear. The figure below shows the share of a county’s vote won by President Trump vs. the total fertility rate for that county from 2016 to 2019, the latest available data. 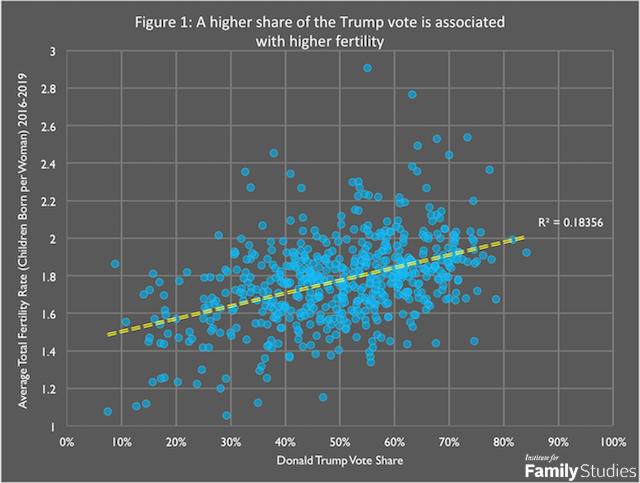 Data about fertility rates is only available for around 600 of the largest counties, thus many small, rural counties are excluded. But the relationship shown here is clear: President Trump did better in counties with higher birth rates, and the difference is fairly large, with the most pro-Biden counties having total fertility rates almost 25% lower than the most pro-Trump counties. If anything, this effect is understated, since the most pro-Trump counties were small, rural counties that usually have even higher birth rates and are excluded from this analysis. Indeed, Yi Fuxian at the University of Wisconsin showed that the relationship between voting and fertility is even more pronounced when we look at fertility rates and state voting trends.

Nor is the relationship between fertility and presidential voting a spurious result related to urbanization, race, or state practices in drawing county lines. The figure below extends the analysis to more presidential elections, and includes controls for the state a county is in, the county’s non-Hispanic white population share, and the county’s population density. 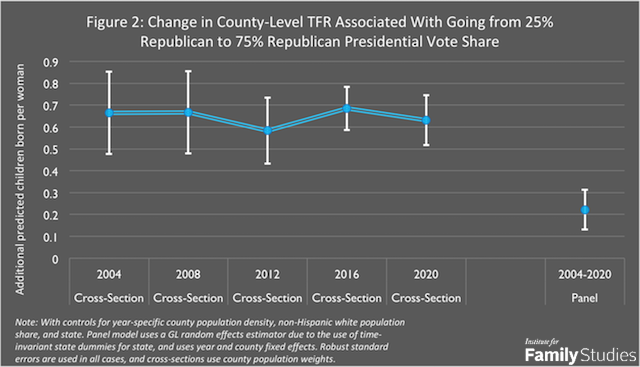 As can be seen, the Republican fertility advantage is relatively stable across elections. It even shows up in a panel model, suggesting that as counties become more Republican, their fertility rates tend to rise relative to the national average. The use of state controls (and some robustness tests I ran in large states with many counties) suggests this effect isn’t driven by unique features of states: within Red states or Blue states, and controlling for county racial and ethnic characteristics and population densities, Republican counties have higher birth rates.

This is particularly astonishing given that Democrats perform very well in counties with many Hispanic and black voters, who have higher birth rates than non-Hispanic white Americans (and indeed, the more non-Hispanic whites in a county, the lower its birth rate in my models). The relationship is also unchanged if the sample is restricted to only very-high-density counties, such as those representing the center of major cities. In other words, the Republican “fertility advantage” does not arise from more rural counties with higher birth rates, and it exists despite the fact that much of the Democratic Party’s electoral base is among racial and ethnic groups with higher birth rates in general. The split I identify isn’t about race or urbanization or region of the country: it’s about family. Within racial- or ethnic-groups, within states or urbanized areas, the more conservative areas tend to have more babies.

Election data can only tell us so much. But data from the General Social Survey can be used to provide a more granular understanding of the ideological fertility difference. The figure below shows the number of children ever born to women sampled in the GSS who were over age 44, and women ages 30-44, by political ideology. 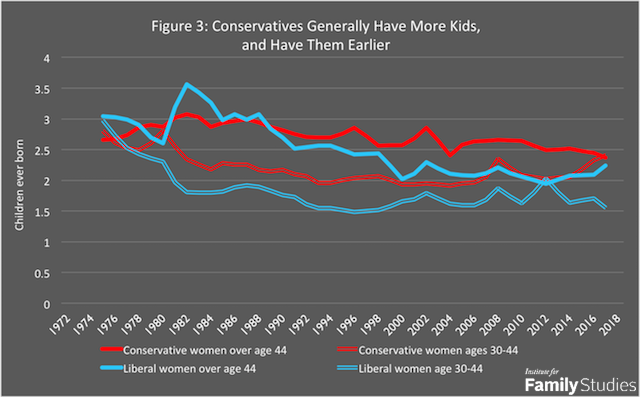 This graph has no controls for other factors. But the figure below introduces control variables for women’s age, the year of the survey, women’s race or ethnicity, educational level, and marital status. It shows the difference between conservative and liberal women after all these variables are controlled for, with the period 1972-1994 lumped together as one group, and 1995-2018 lumped together as another group. 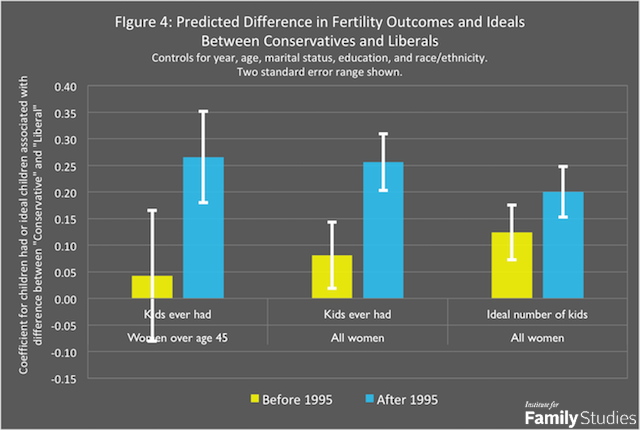 Before the 1990s, fertility differences by ideology were small. Women over age 45 had no difference in completed fertility, and women of all ages (but with controls for year of age) had only a small difference. There was, however, already a difference in ideology: conservative women reported a childbearing ideal about 0.12 kids higher than liberal women, which is a small, but significant, difference.

For the period after 1995, however, gaps grow. Conservative women over age 45 had about 0.25 more children on average than their liberal peers, an effect which in fact shows up throughout the age distribution once the “over 45” restriction is relaxed. The gap in fertility ideals grew larger as well.

But what’s really going on here? Is it that conservatives get married more and have more children? Or is it that getting married and having children makes people conservative? It’s likely that causality flows in both directions. Holding conservative beliefs and attitudes probably makes people more determined to marry and have children earlier, given the significant emphasis conservatives place on the family, children, and marriage. Moreover, some liberals (though certainly not most) have begun to adopt explicitly anti-natal ideologies related to worries about population growth and climate change. Indeed, as shown above, more conservative people report desiring more children in the future, a good indication that conservative attitudes may indeed lead to higher fertility: conservatives who have no kids yet desire more kids than liberals with no kids yet.

However, having children probably also makes people more conservative. Prior academic research has found that after women have children, they tend to subsequently adopt more conservative social attitudes around gender roles, a result present in both British and American datasets.

Second, the Republican political coalition is heavily weighted towards counties that have a lot of children. In other words, any policy increasing across-the-board transfers to children will tend to provide more financial support to Republicans and more conservative parts of the country, where there are more children. A child allowance, for example, would disproportionately transfer funds from the predominantly Democratic counties that make up 70% of the country’s economic output towards more Republican counties and individuals.

Moreover, the decline in birth rates around the country in recent years may present a challenge for conservative politicians: delayed and reduced transition into marriage and parenthood will result in young adults spending more years with more liberal ideologies. It will be increasingly difficult to build constituencies around conservative social priorities in a world where fewer young adults are at the point in life (married with kids) where those priorities make sense with their life situation.

Finally, this conservative fertility advantage probably will not give conservatives some inevitable long-term political edge. Fertility rates are falling for conservatives just as much as liberals. Given the size of the fertility differential between conservatives and liberals, it doesn’t actually take a large amount of ideology switching to offset this higher birth rate. Thus, while conservatives may wish that their fertility advantage could afford a durable political majority, that hope is probably just as fleeting as the now-silly-sounding claims of progressives a decade ago that immigration would create a durable Democratic majority. That’s because, at least right now, conservative parents have not been sufficiently successful in keeping their kids in the fold.