Parents’ Shared Time in the U.S., Spain, and France

With Valentine’s Day just around the corner, many couples are looking forward to a long-overdue date night, especially those of us who have children. Whenever my husband and I actually make it out the door without our kids, it always feels like we’ve won a great battle. It takes tremendous effort to schedule a babysitter and muster the energy to go out after a busy week. But no matter how tired we feel, we are always happy we made the effort, and at some point during the evening, one of us will ask: “Why don’t we do this more often?”

Of course, most parents know the answer: family life just gets busy, and too often couple time takes a backseat to everything else, including our children. As W. Bradford Wilcox and Jeffrey Dew explained in a National Marriage Project report on date nights:

For many couples, the experience of becoming a parent can undercut or diminish the quality of married life. This is partly because parenthood is stressful and partly because children often limit their parents’ one-on-one couple time. In a recent study, for example, spouses with children at home reported spending nearly two hours less per day together than did those without children at home.

Couple time for parents in the United States, France, and Spain was the focus of a recent study published in the journal, Demographic Research. Joan García-Román, Sarah M. Flood, and Katie R. Genadek analyzed data from national time-use surveys in all three countries to compare parents’ shared time. They found that parents in France and Spain surpass U.S. parents when it comes to couple time. In fact, French parents spend about 40 minutes more per day and Spanish parents spend 73 minutes more per day with a partner than parents in the United States.

As the figure below shows, U.S. parents spend the least amount of time per day with their partners compared to parents in both Spain and France. 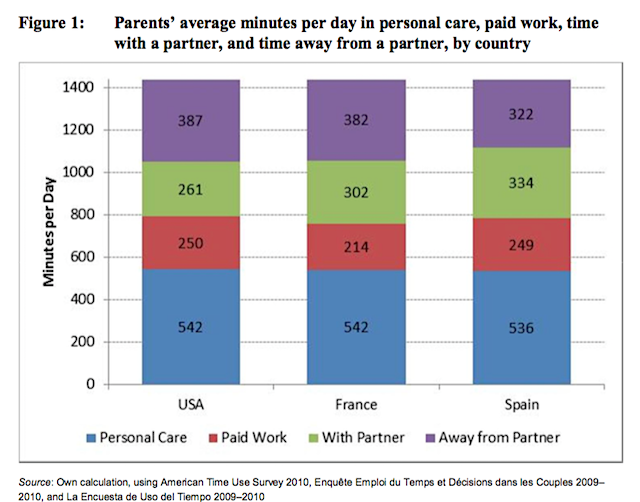 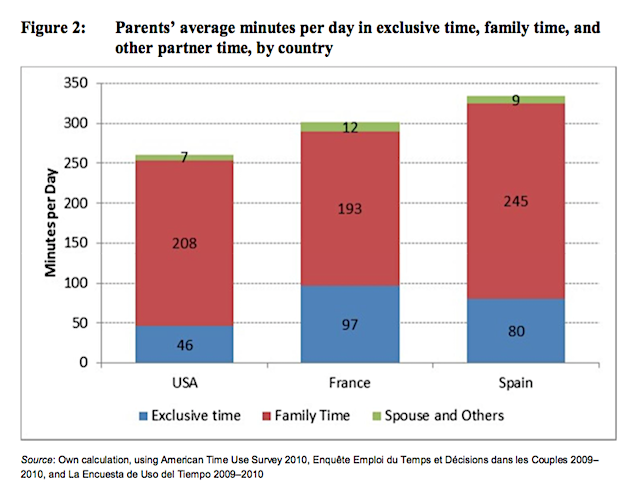 Not surprisingly, the study found a negative association between paid work and family time in all three countries. As the authors explain, “each minute in paid work is associated with more than a 15-second reduction in time together as a family.” U.S. parents work more hours a year than parents in the other two countries: 1,790 hours, compared to 1,686 hours for Spanish parents, and 1,479 hours for French parents. While fathers’ employment is high in all three countries, mothers’ employment varies: 65 percent of mothers were employed in the U.S.,  compared to 72 percent of mothers in France, and 57 percent in Spain. Mothers in the U.S. also averaged more work hours per week than mothers in the other two countries.

But paid work was not the only factor in parents’ shared time, nor did it have as great of an impact as the authors expected. They write: 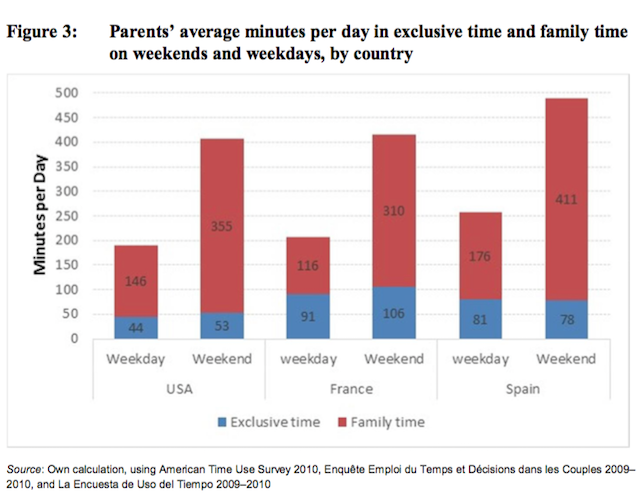 Importantly, the study found that parents’ shared time is also influenced by the parenting norms of each culture, as well as how parents spend their time. For example:

The study concludes by noting that while a number of factors, including paid work, appear to influence parents’ shared time, other differences “appear to be rooted more in norms about family life and the cultural rhythms of daily life.”

One takeaway from this study is that while we can’t always control the demands on our time from outside forces, such as paid work, we have more control over how we spend our free time and what we prioritize as a family. While family time with children is vital, couple time is equally important and worth the effort. Research indicates that couples that spend quality time together report happier and more stable marriages. According to a National Marriage Project study, “husbands and wives who engaged in couple time with their mates at least once a week were 3.5 times more likely to report being very happy in their marriages, compared to those who enjoyed less quality time with their spouse.” And when parents enjoy a healthy relationship, children benefit as well.

Couple time is one of the keys to a happy marriage and helps cultivate a healthy family life. As we mark National Marriage Week in the U.S. (Feb. 7-14) and prepare to celebrate Valentine’s Day, there’s no better time for parents to commit to making regular couple time a priority. Our marriages—and our children—will thrive if we do.