New Census Data: Key Takeaways on Divorce, Marriage, and Fertility in the U.S.

The lockdowns and fear associated with COVID-19 took family formation and divorce in the U.S. to historical lows in 2020. But what’s happened since then?

As the country began to come out of the pandemic, many experts expected that 2021 would be a year when we saw pent-up demand for marriage, childbearing, and divorce take off. With the newly released 2021 American Community Survey (ACS) data from the Census Bureau, along with 2021 birth data from the Centers for Disease Control (CDC), we can now put those predications to the test. 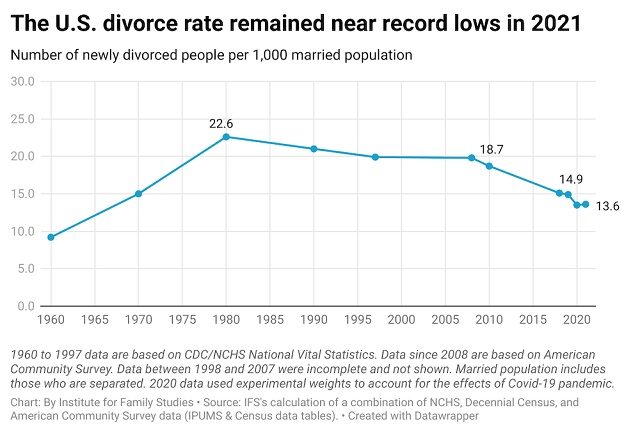 One reason that marriage seems more stable today is that tying the knot is becoming much more selective than it once was. In other words, fewer Americans are entering marriage in the first place. The ACS data suggest the marriage rate ticked up a bit in 2021 compared to 2020 but remains close to the all-time low of 2020. For every 1,000 unmarried adults in 2021, only 30.5 got married. This is slightly higher than the level in 2020 (30.2 out of 1,000 unmarried Americans), but markedly lower than it was in 2019, when 33.2 out of 1,000 unmarried Americans got married. And the 2019 level was an all-time low at the time. Clearly, when it comes to family formation, the state of our unions is not strong.1 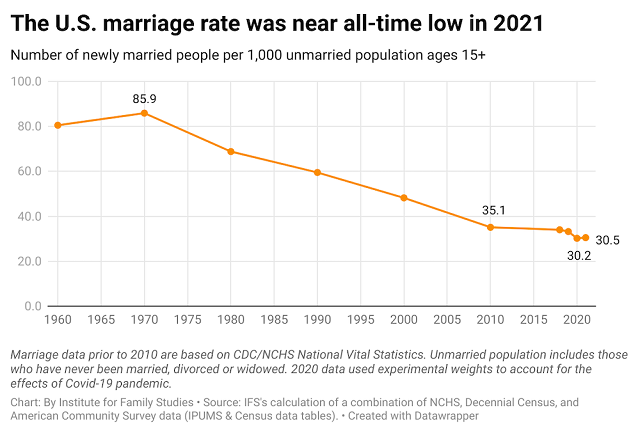 We are not yet seeing a significant rebound of marriages and divorces in the 2021 ACS data, as experts expected. Part of the reason could be that the pandemic was still causing disruptions in life as the new variances emerged and vaccines were introduced, and another reason is related to measurement. But there are also data limitations worth noting. In the American Community Survey, questions about new marriages and divorces were asked whether the respondent got married or divorced in the past 12 months prior to the date of interview. Given that the ACS is administered throughout the year, marriages and divorces could have taken place during the survey year or during the previous calendar year. Therefore, respondents in the 2021 ACS could have been married as far back as January 2020 or as late as December 2021. This means that some of the marriages and divorces observed from the 2021 ACS may reflect the numbers in 2020, when the pandemic was in full force.

Besides marriage and divorce, another important indicator that reflects the health of American families is the birth rate. During the pandemic, the U.S. birth rate experienced its largest single-year decease in nearly 50 years, according to government data based on birth certificates. The total fertility rate, which is the estimated number of children a woman has in her lifetime, also dropped to 1.6 in 2020. The fertility rate did rebound slightly in 2021 to 1.7 children per woman, but it is still well below the population replacement level (2.1 children per woman). In general, the CDC data indicate that fertility has been falling since 2009, when the Great Recession struck. 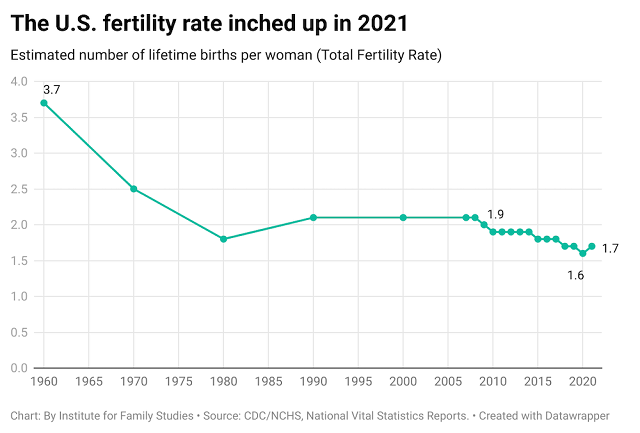 All together, these trends suggest that American family life is now heading back to the trajectory it was on before COVID-19 struck. This is a trajectory marked by fewer marriages and babies, and lower divorce rates. In other words, we do not see much evidence that the pandemic has fundamentally shifted the overall course of American family life. The data from 2021 suggest that America remains on track to a world where marriage and family life are rarer but perhaps more stable.

Editor’s Note: This is an update from a November 2020 brief by Wendy Wang.

1. The 2020 ACS data included in the trend line are for illustration purposes only. The Census Bureau did not release its standard 2020 ACS 1-year estimate given the impact of the Covid-19 pandemic on data collection. The response rates for March-September 2020 ACS data collection were severely impacted as many ACS data collection operations had to be suspended. The divorce and marriage estimates we calculated for 2020 was based on Census’s experimental estimate, where the Census Bureau used a series of experimental weights to correct the higher nonresponse bias introduced during the pandemic. The Bureau advised against comparing the 2020 data with other years of ACS data.

Nevertheless, administrative data based on marriage and divorce certificates collected at the state level did indicate a sharp drop in the number of marriages and divorces between 2019 and 2020. For example, the number of recorded marriages dropped from around 2 million in 2019 to 1.7 million in 2020, a 17% drop in just one year. Prior to COVID-19, the number of marriages only declined about 5% between 2018 to 2019, and the drop in other years was even smaller. Other research based on state data also suggests marked declines in marriage and divorce in 2020.

The Share of Never-Married Americans Has Reached a New High