With the birth rate in the U.S. at or near historic lows, many commentators have been searching for factors that might explain these declines. I have argued, repeatedly, that declining marriage is the most compelling explanation, not education, urban-ness, pet-obsession, or a lack of pro-family policies.

However, there is one variable that may be able to explain a lot of the decline in fertility: changes in housing conditions. This may seem like an odd candidate for explaining fertility decline, but it turns out to matter quite a bit. One of the biggest costs of having a child is housing: kids take space! If young people are stuck in smaller houses than in the past, or in more unstable or expensive housing situations, it could reduce fertility.

There is some good suggestive evidence that this may be happening. For example, the real estate company Zillow published a short blog several months ago showing that places with faster home price increases had a faster decline in birth rates. Because Zillow makes its data publicly available, it’s possible to not only duplicate their work but also expand on it. The graphs below show scatterplots of rent increases and home price increases for counties with birth data from the CDC and housing data from Zillow, for 2011-2016, versus how age-specific birth rates changed in those counties 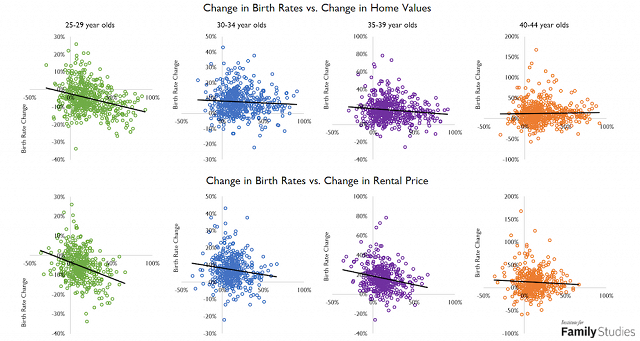 The result is interesting. Faster-rising rents are associated with lower fertility for all age groups: for women in their 20s or 30s, if rent is rising, fertility is falling. While some families get income from rental properties, this is far less numerous than the families paying rent, and families earning money from rent tend to be older, more geographically dispersed, and less fertile anyway. Higher rent has the strongest correlation with lower fertility for women in their 20s, which makes a lot of sense because women in their 20s are the most likely to be renters, and so rising rent hammers these women’s budgets the most.

But for home prices, the story is different. Rising home prices reduce birth rates for younger women, but for women in their upper 30s, there is actually a very slightly positive association between home prices and fertility! Higher prices reduce fertility for younger women but might increase fertility for older women. This, again, makes sense: younger women are less likely to own homes, so higher prices lock them out of getting a newer, bigger, better house. But for older women who are more likely to already own homes, higher housing prices can be a good thing, as it gives them more wealth.

Internationally, the association between worse housing conditions, or higher housing costs, or just smaller houses generally, and low fertility is fairly good as well. The chart below shows selected countries for which I could find information on average house size, graphed against fertility. 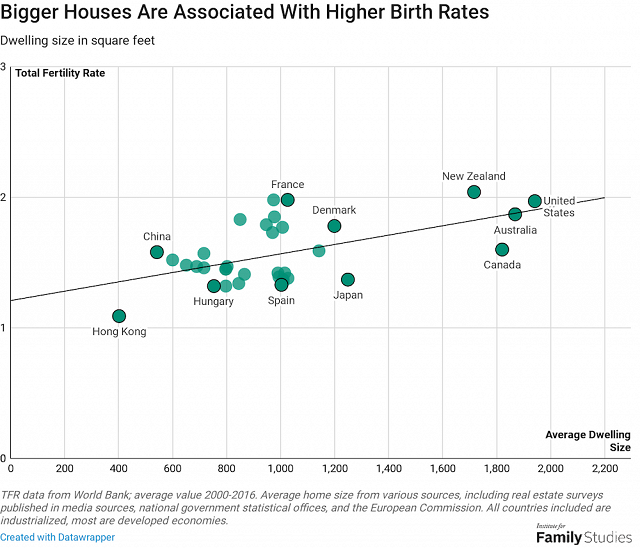 The sample is small, the data imperfect, and the relationship noisy: but, at least at first glance, it does seem like bigger houses are correlated with more kids. We can also look at “over-crowdedness.” The European Union collects data on how many people live in housing units and identifies when the number of people in a unit is above a certain threshold. The chart below shows the share of the population living in “overcrowded” dwellings versus the fertility rate. 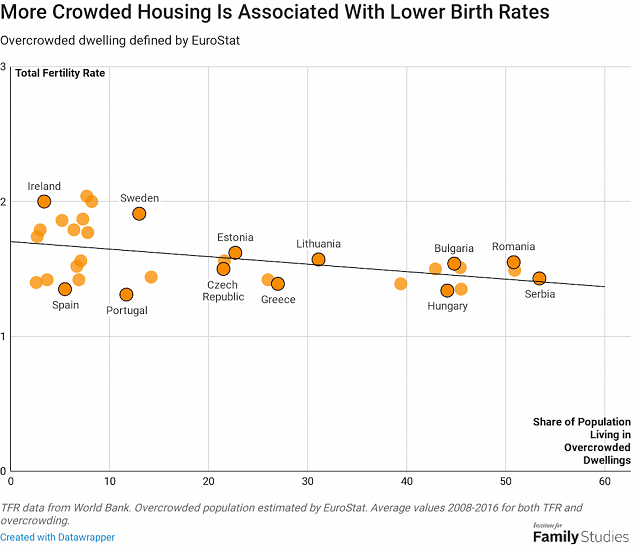 Again, the relationship is noisy and the data imperfect, but using a different set of countries and different indicator, it looks a lot like worse housing conditions really are connected, somehow, with low fertility.

However, not only do these charts not prove causation, it’s possible that causation could flow either way! Maybe bad housing reduces fertility or maybe low fertility creates changes in the housing market! If nobody is having kids, maybe builders make tinier houses; if population growth is low, maybe fewer houses are built at all. Certainly, the U.S. has seen a tiny-house movement in response to younger people delaying marriage and childbearing: but which is cause and which is effect? It’s worth mentioning that U.S. housing is indeed getting smaller. The average size of new, freestanding housing has been falling for several years after decades of increase, and multi-family housing has been growing in prominence. The result is that the square footage of a new housing unit has never returned to its peak in 2007, and has been steadily inching downwards since 2013—despite a booming economy. 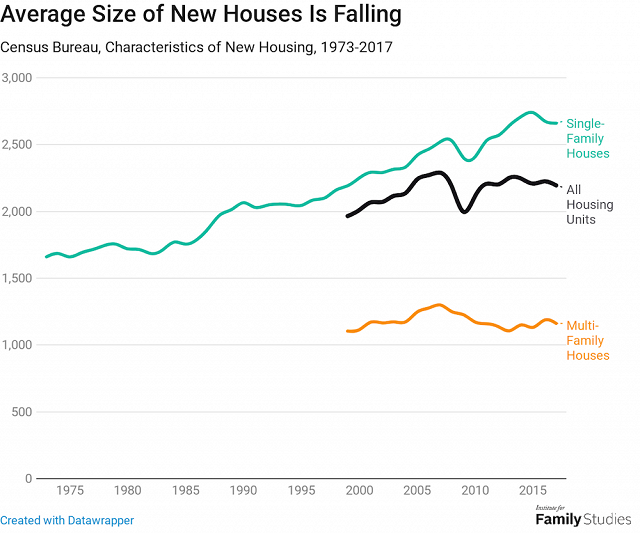 There are several ways to try and untangle cause and effect. The first is to look at it from a high level: if lower fertility causes smaller, worse, or pricier housing, then low-fertility, bad-housing places should not have big gaps between desired fertility and actual fertility. That is to say, if people just didn’t want as big a family, and so builders responded with smaller homes, then low-fertility, bad-housing places should probably have about the same, or probably an even lower, gap between ideal and actual fertility as other places. But it turns out that, for the sample of 27 European countries for which I have actual and ideal fertility data, as well as housing overcrowding data, the fertility gap is actually slightly larger in more overcrowded places! Citizens of countries with overcrowded housing still want bigger families.

Anecdotally, this has been my experience as a resident of Hong Kong, which has nearly the lowest fertility on earth at around 1.2 expected births per woman. It also has some of the smallest average house sizes on earth, and one of the highest population densities. But it didn’t get this way because Hong Kong women just didn’t desire kids anymore. In 2012, the average woman in Hong Kong still reported wanting 1.6 children, a number which basically hasn’t changed since 2002. Hong Kong’s gap between desired and actual fertility has risen at the same time that housing prices have grown explosively in the region.

Academic researchers have gone deeper. From 1995 to 2008, higher home prices had a large, long-lasting negative effect on the fertility of renters, and a small-but-fleeting positive effect on the fertility of homeowners, at least in England and Wales. A similar effect has been observed for U.S. metro areas. Another study has found that higher housing prices are associated with a delay of first birth.

In the past, this did not cause lower lifetime fertility, but given how late first births have become nowadays, it may reduce completed fertility for women in the future. Within China, higher housing prices are associated with lower fertility. An academic study of Hong Kong attributes 65% of its fertility decline since 1971 to higher house prices. However, there is some dissent: a study of Canada finds that the positive effects on homeowners so greatly outweigh the negative effects on renters that higher home prices actually increase fertility.

All of these studies, however, have one major weakness. None of them conduct experiments: they basically all are looking for very-well-controlled correlations, not actual causation.

Two studies have actually attempted to assess whether deteriorating housing availability causes lower fertility. One study used data from England about how often localities refuse to allow new housing to be built. This creates a kind of natural experiment when two nearby, similar localities allow very different amounts of housing to be constructed. This study found, as one might expect, that when localities refuse to build houses, it causes home prices to rise, and birth rates to fall by a large amount.

A second study focuses on the United States. It used data culled from court records to identify states where “zoning” and “land use” court cases come up the most. This provides an annual time series for each state of how much each state restricts new construction. And it turns out, when states restrict construction, it reduces birth rates, especially for women in their 20s.

In other words, lower fertility may truly be partly about housing. But the story is complicated: a counterfactual scenario holding house size or homeownership constant at 2008 levels doesn’t produce a radically different fertility estimate. There are just too many variables to consider: tight housing supply can show up as more people living with their parents for longer, more people living in group quarters, people living in smaller houses, more people living in a house per bedroom in it, higher rental costs, higher mortgage indebtedness, worse quality housing, and many other channels. But while no single variable may explain lower fertility, a few suggestive data points can be noted.

First, the share of women living with their parents during peak childbearing years has risen, suggesting that more young people might be facing barriers to starting their own households. 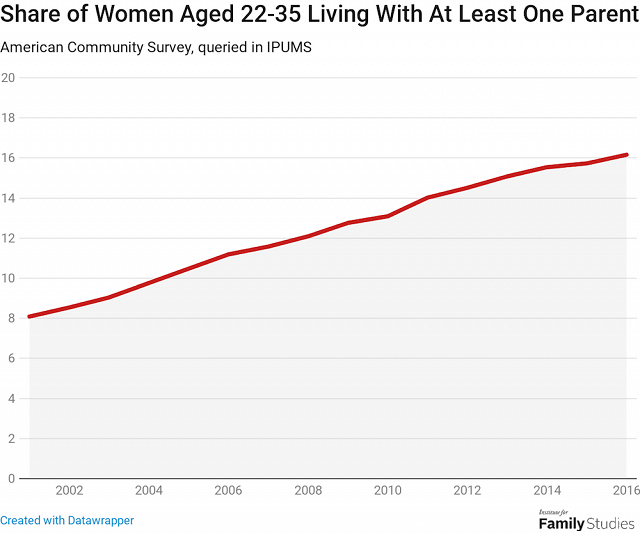 Second, the average number of rooms in a house where a 22 to 35-year-old woman lives has declined since 2008 and has been basically flat since 2010, suggesting even if they do get out of mom and dad’s house, young women today aren’t getting more space of their own. 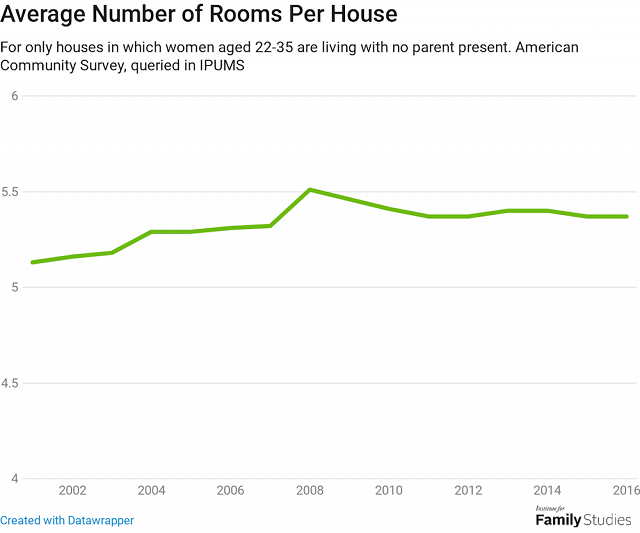 And to pay for those smaller houses, women of childbearing age today are packing in more roommates. The chart below shows the average number of family units per household; so, a married couple would be a single unit, but three housemates would be three family units. 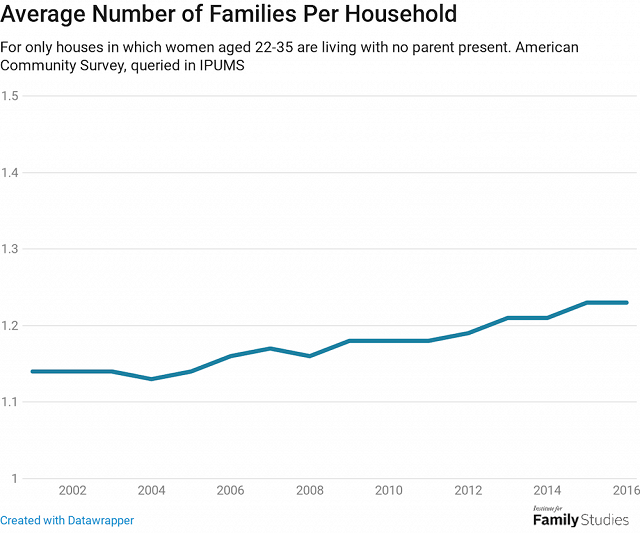 Living with parents longer, moving into smaller houses, sharing those houses with more roommates: those all signal a housing market that isn’t providing enough space for everybody. As you might expect, homeownership for young people has plummeted and is only just recently beginning to recover. 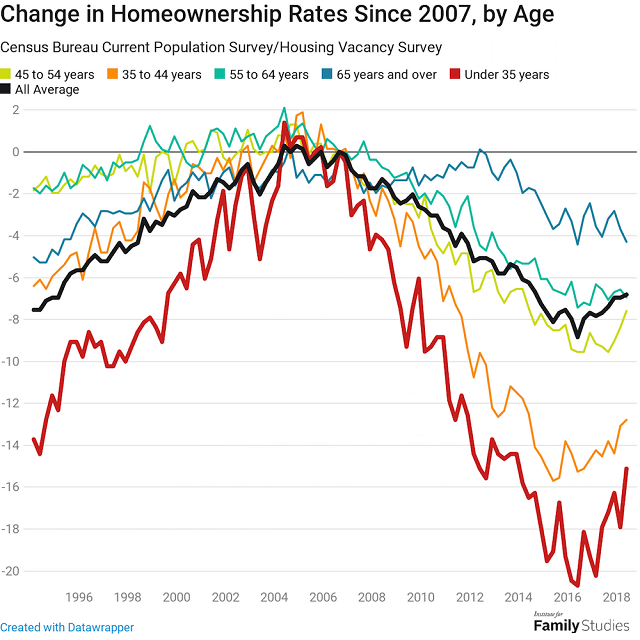 And for those who can’t afford homes, inflation-adjusted rent is rising. 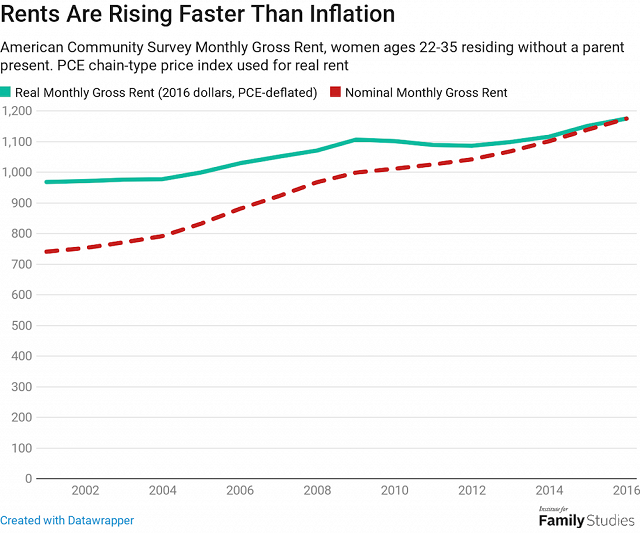 In other words, at every stage, the housing situation for young people disfavors childbearing more than in the past, which is almost certainly a major driver of low fertility today. This is both encouraging and disheartening. It’s encouraging because the solution to high housing prices is very simple: relax zoning regulations and build more houses. But it’s also disheartening because local land use policies are often deeply entrenched and hard to change and can usually only be altered through local action. There’s no congressional silver bullet for housing costs. Some areas will solve their problem, but many won’t. In other words, if housing conditions are really a major driver of lower birth rates, then lower birth rates will probably stick around for a long time to come.