In the 2006 film, “The Pursuit of Happyness,” Will Smith portrays Chris Gardner, a single father who manages to pull himself and his young son out of homelessness by becoming a successful stockbroker. The movie is based on a true story, and we learn early on what drives Gardner when it comes to his son: he did not meet his own father until he was grown, and he’s determined that his children are going to know their father. So when his son’s mother announces plans to move away, Gardner insists, “my son stays with me.” There are some tense moments in the film when it’s easy to question whether it might have been better for the child to go with his mom—like when father and son spend the night on the filthy floor of a train station bathroom. But as we watch Gardner work hard and care tenderly for his son, it becomes clear that there is no better place for the little boy to be than with his dad.

Since the film aired just over a decade ago,  it’s become more common for children in single-parent families to live with just their fathers. According to a new report from the U.S. Census Bureau, 16.1% of single-parent households today are headed by fathers—up from 12.5% in 2007.

Overall, most U.S. children still live with two parents, while 27.1% live with one parent—most with their mothers, who still account for the overwhelming majority of single-parent families. Even so, as the figure below shows, the share of children living with a single father has increased from about 1% of all children in the 1960s to 4.35% in 2017. 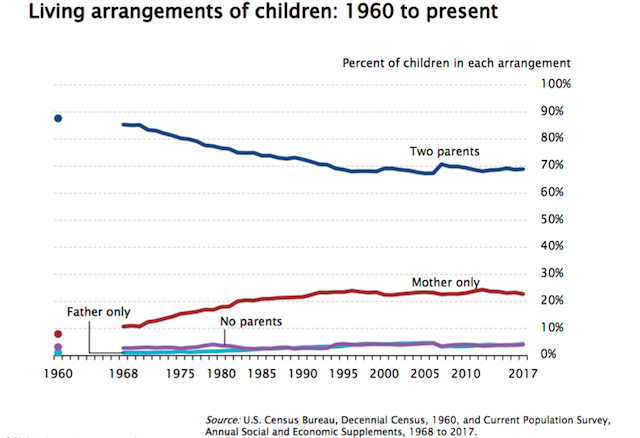 In an email, Christopher Brown, president of the National Fatherhood Initiative (NFI), told me that the rise in single-father families can be attributed to two cultural factors: 1) “Men are seen as more capable parents, in general, and accepted as single fathers, specifically,” and 2) “A greater willingness of the courts to award custody to single fathers—essentially awarding custody to the best parent, regardless of gender.”

So, what are some of the characteristics of today's single dads? Here are five facts about single-father families that provide a glimpse into who they are and how they differ from single-mother families.

1. Most single fathers are divorced. As shown in the Census figure below, the majority of children living with their fathers only are living with divorced dads, although the share who are living with never-married fathers has risen in recent years. By comparison, most single moms (49%) have never been married. 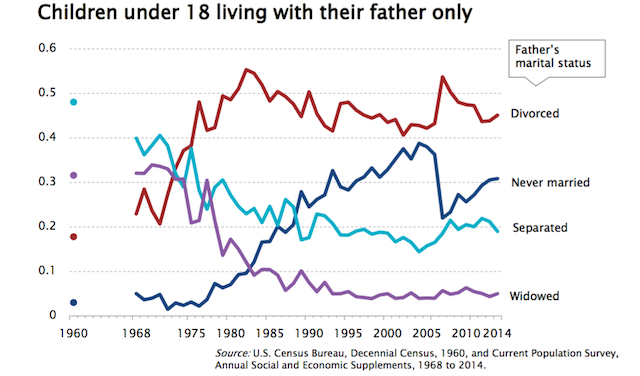 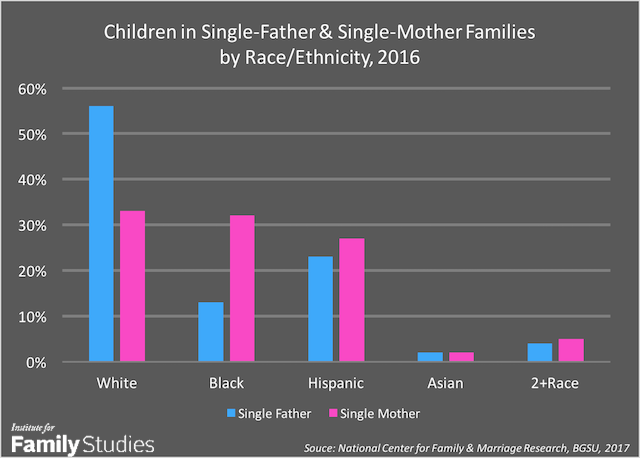 Cohabiting single fathers are particularly disadvantaged on most socio-economic indicators. They are younger, less educated, and more likely to be living in poverty than are fathers who are raising children without a spouse or partner in the household.

4. Single father-families are better off financially than single-mother families. For example, Pew reports that the median-adjusted annual income for a single dad with two children is about $40,000, compared to $26,000 for a single mom with two children. Moreover, the share of children living in poverty is about twice as high among those living with single mothers as those living with single fathers. Although single fathers are less likely to be living in poverty than single mothers, they are still significantly more likely to be living in poverty than married parents: 8.4% of related children in married families were in poverty in 2016, compared to 19.9% of related children in single-father families, according to the latest Census report.

With a few possible exceptions, the children of single fathers do about as well in terms of internalizing behavior and academic performance (sometimes better)… However, the children of single fathers appear to be more likely to participate in externalizing behavior and substance use … As of yet, the few studies of young adults (as opposed to adolescents) do not seem to indicate significant long-term differences, as related to marriage, teen birth, and divorce, between those reared in single-father versus single-mother homes.

A study by Child Trends researchers published in 2010 used a sample of nearly 4,000 adolescents from the National Longitudinal Survey of Youth to study the characteristics of single-father families and the “effects of fathers’ involvement and parenting on outcomes” like graduation from high school. This study was unique in that instead of grouping cohabiting fathers with lone fathers, it distinguished between them. Among the study’s findings: cohabiting single-father families had fewer family routines, like eating dinner together, and single fathers who were living with a partner “had lower levels of closeness and awareness than did parents in all other family times.” The authors concluded that “offspring who reside with a custodial father and their cohabiting partner may face additional challenges and unique circumstances that cannot be fully explained (mediated) by differences in father involvement and parenting styles.”

Finally, a more recent study published in November in the Journal of Family and Child Studies used data from the National Longitudinal Study of Adolescent to Adult Health to examine sexual behavior among 15-to-19-year-olds being raised in single-parent families. The authors compared various sexual behaviors (including intercourse, contraceptive use, and attitudes toward pregnancy) among boys and girls living with either single mothers or single fathers. Surprisingly, they found “few differences” on these sex-related outcomes between teens living with single moms or single dads.

Single fathers represent a unique and growing share of single-parent families for children. While they differ in important ways from single mothers, Brown emphasizes that “single dads need some of the same supports.” This includes “assistance from the other parent, if that person is in the family picture, to raise their children as effective co-parents, and [when the child’s mother is not in the picture] from family members, friends, and their network (e.g. faith community and direct-service nonprofits) in raising their children.” Because single-father families are more likely to be in poverty than married families, they also benefit from access to government services and aid. Finally, single dads need more community-based and online support groups and resources that are geared toward the needs of fathers, not just single mothers (NFI provides a list of resources for single dads here).

Alysse ElHage is editor of the Institute for Family Studies blog.