When I was two years old, my newly divorced mom enrolled me in one of our area's most popular, and pricey, Christian preschool programs so she could go to work. It was an expensive choice for a single mother, and one she continuously had to defend to family members who questioned why she would pay private school tuition when she could barely make ends meet.

Because we moved around a lot, I ended up attending five different Christian schools over the years, ranging from a tiny Pentecostal-run academy to the large Southern Baptist school from which I eventually graduated. Nonetheless, Christian schooling became one of the few constants in my life where the shape of my family never seemed to stay the same. Even after another divorce and through various job changes and relationship challenges, my mom always found a way to keep me (and for a time, my younger siblings) in Christian school.

It turned out to be one of the best investments she would make in my future. In many ways, Christian education was my lifeline out of a world plagued by father hunger, family disfunction, and economic instability. Not only did I receive a private school education, but I also gained the direction and support I needed to stay on a path toward the stable family life I enjoy today.

My experience with Christian education is backed up by a new report from the Institute for Family Studies and the American Enterprise Institute. The Protestant Family Ethic, written by Albert Cheng, Patrick Wolf, Wendy Wang, and W. Bradford Wilcox, is the first of its kind to analyze the effects of private versus public schooling on three family outcomes for adults. The report found that students educated in private schools, especially Protestant schools, are more likely to be in intact marriages and to avoid out-of-wedlock births as adults. Read a full summary of the report here.

One of the report’s most striking findings involves the powerful effects of religious schooling on students from lower-income backgrounds. The authors explain, “religious schools, both Catholic and Protestant, have comparatively more positive influences on family stability for students who grew up in financially difficult circumstances.” 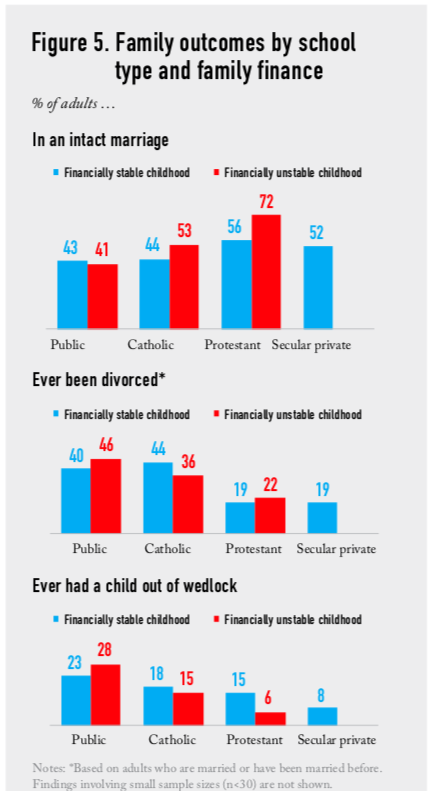 According to the report:

As someone who was raised in a financially turbulent, single-parent household, I have a few theories about why this might be the case. Here are three ways religious schooling positively helped shape my future family life for the better.

1. Examples of Healthy Marriages and Decent Fathers and Husbands.

Growing up in a broken home where men were either absent, unreliable, or dangerous, the messages I absorbed about fathers, marriage, and family life were overwhelmingly negative. But in Christian school, I found peace and hope in the midst of family turmoil. It was there that I was introduced to the concept of God as my Father who looked upon me as His child, which mattered a great deal to a little girl who desperately missed her biological father. And it was there I experienced Christ’s unconditional and unfailing love through the lives of my teachers and the pastors who led the school.

At the same time, I was exposed to healthy married families with faithful dads and husbands—men who did not harm or abandon their families but who loved God, their wives, and their children. Many of these examples came from married teachers whose spouses also worked at the school—like my favorite bus driver/ janitor, Mr. Robb, a gentle giant whose wife taught kindergarten, or my high school Algebra teacher and senior adviser, Mr. Ammons. Something I noticed about their families is the role faith played in their lives. The parents prayed together and took their children to church often, and they were committed to something, or Someone, bigger than just each other (and research confirms that couples who pray together and attend church regularly enjoy more stable marriages).

2. A worldview that pointed me to a path for a successful future.

In the IFS/AEI report, the authors reflect on why Protestant schools appear to have a stronger influence on the future family lives of students compared to the other schools, noting that:

Protestant schools are more likely to stress the importance of marriage as a good in and of itself—and of having and raising children in marriage. The different messages they send may play some role in providing a normative context for their graduates’ future family lives.

This was certainly true in the schools I attended. The contrast between my unstable family life at home—where divorce and father absence seemed to spread like a disease—and what I experienced in the Christian school classroom gave me a taste of a healthy family life. I was taught a worldview that said every life has value and purpose, that marriage was designed by God for the good of children and society, that divorce was taboo, and sex and parenthood should be reserved for marriage. Importantly, I saw these values lived out in the lives of my teachers and in most of the families of my peers. I learned that boundaries matter, not to fence me in but to protect me from harm. Instead of lessons on condoms, I was encouraged to delay sex until I was married, to work hard in school so I could go to college, and to eventually get married and start a family—a sequence of steps that is actually linked to lower chances of poverty and a bigger chance of achieving the American dream. These values, and the support I received to sustain them, helped me to avoid some of the common risk factors for kids from broken families.

I was a bit of an outsider at my Christian school. Most of the students lived with their married parents in stable, middle- or upper-class neighborhoods, while a handful, like me, came from broken homes, often relying on scholarships or financial aid to be there. But the friends and classmates I found there helped keep me away from choices that would have derailed my future. The majority of students attended church regularly and avoided alcohol, drugs, and early sex. While there were definitely some kids who were having sex and partying on the weekends, most of the students were striving to avoid these behaviors.

Again, my experience echoes the findings in the IFS/AEI report, which identified “stark differences in the peer environment of various school communities.” Compared to secular private and public school students, Millennials who attended religious schools were significantly more likely to report that “almost all” their peers attended church regularly, did not use drugs, had never had sex, and planned to go to college.

The Protestant Family Ethic concludes that “private schools serve the public good more by fostering stronger and more stable marriages among American men and women compared to public schools.” Without a doubt, religious schools have a vital and unique role to play in promoting this common good, especially among lower-income kids from unstable families who are hungry for the faith, values, and role models these schools offer. Just as it did for me, religious schooling can provide at-risk students with a lifeline out of the cycle of family instability and point them toward a path for a brighter family future.