Babies vs. Immigrants: Must We Really Choose?

American fertility is falling, which has caused many commentators, including yours truly, to publicly worry about low birth rates. This concern is shared by many people on all sides of the political spectrum. However, some progressives have argued that worries about low birth rates are inherently racist. This argument is wrong for many reasons, outlined below. In fact, different fertility scenarios have virtually no impact on the racial mix of the population, and what little effect does exist suggests that higher birth rates could make the country slightly more racially diverse.

The somewhat-tortured argument progressives use to justify the “fertility concerns are racist” view essentially positions fertility and immigration as competitors. It suggests that concerns about fertility only matter if they result in population declines that could threaten the economy. But of course, lost births could be replaced by immigration! According to these critics, the only reason to worry about population decline is if policymakers restrict immigration, which, so these progressives would say, is racist.

This argument is nonsensical from the start: the biggest reason low fertility is bad is not that population growth is lower, but because most people want two or three kids. Fertility rates at 1.7 kids per woman reflect a nation full of unfulfilled family aspirations. Whether immigration is high or low is irrelevant: the problem is people want kids and face barriers to having them. But I’ve made the argument about fertility desires elsewhere. Let’s tackle the demographic math around racial diversity and see if the progressive critique of pronatalism holds up there.

The more interesting element of the progressive critique basically assumes that low fertility is “white-biased;” i.e. that fertility rates are high among minorities and low among whites, and that any desire to restore fertility rates to the levels they were at a decade ago must be about raising white birth rates.

But it turns out, it really makes no difference. I built a full population model including age-specific estimates of immigration, emigration, deaths, and birth rates for the non-Hispanic white population of the United States, as well as other ethnic groups treated as a single group. The graph below shows the historic and projected non-Hispanic white share of the population assuming fertility rates for each group rise 20%, fall 20%, are stable at present levels, or rise to their respective expressed desires over the time period considered. 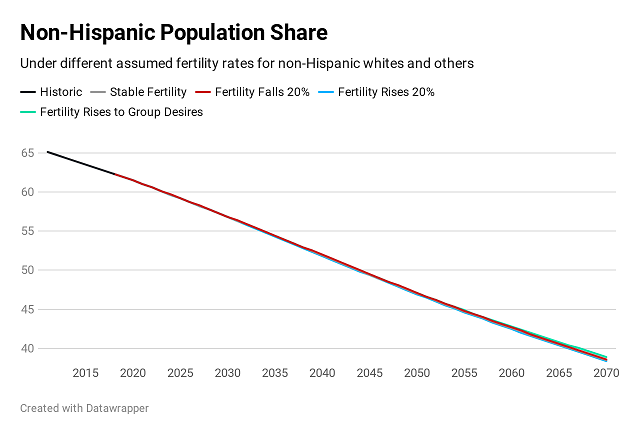 There is virtually no difference in those lines. To the extent there is a difference, it turns out that a symmetric 20% increase in fertility rates results in a slightly less white population in 2070. Meanwhile, a lower-fertility scenario actually results in a whiter population: but, again, there’s virtually no difference here. Allowing fertility to rise to group-specific ideals also makes little difference, because non-Hispanic whites and other Americans are both undershooting their ideals by similarly large amounts.

In other words, raising the warning siren over low fertility would be a totally irrational way to “whiten” the population. Symmetric shocks to fertility have essentially no impact on the pace of America’s racial and ethnic demography. Even many enormous and asymmetrical shocks have no impact if they are in broadly the same direction.

However, truly asymmetrical shocks could have big effects. Consider, for example, a situation where fertility falls 20% over 50 years for racial and ethnic minorities but rises 20% over that period for non-Hispanic whites. Such a divergent shock can have a big impact on the future racial and ethnic mix of the population, as shown in Figure 2. 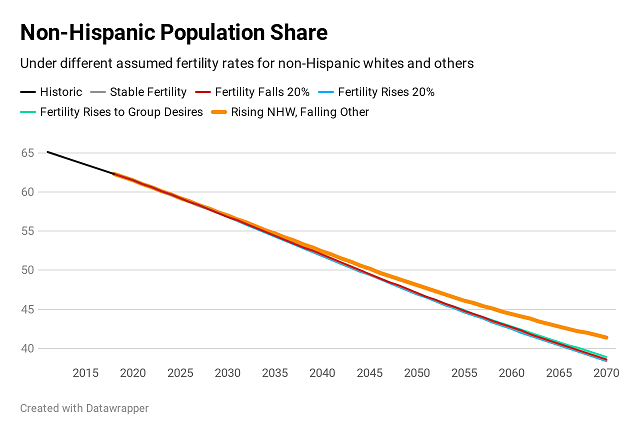 But… it’s a small change, even as we’re talking about an enormous reversal of fertility here. How enormous? Well, here’s fertility rates for these groups over time: 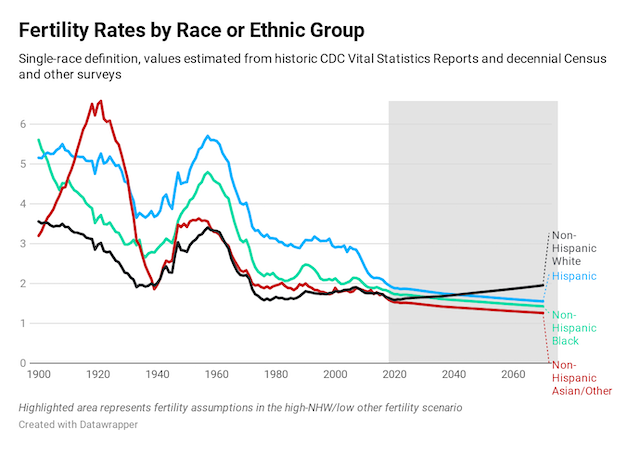 This scenario is extremely implausible. The chance that any policy response to low fertility could cause this kind of racial fertility divergence is essentially zero. Non-Hispanic whites have never had the highest fertility rates in America, and they are never going to.

However, a close look at figure 3 above reveals something interesting: Hispanic fertility has fallen by a lot. Figure 4 below shows the percent change in total fertility rates for each racial or ethnic group for 2007-2018. 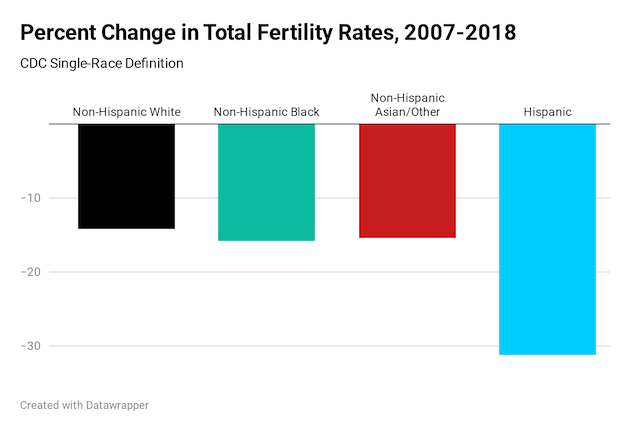 Birth rates have fallen by around 15% for most Americans and by 31% for Hispanics. This gob-smacking huge decline in fertility is a big deal, and worth investigating in detail. Using data from the American Community Survey about fertility and maternal place of origin, it’s possible to estimate how fertility differed for native-born vs. foreign-born Hispanic women. 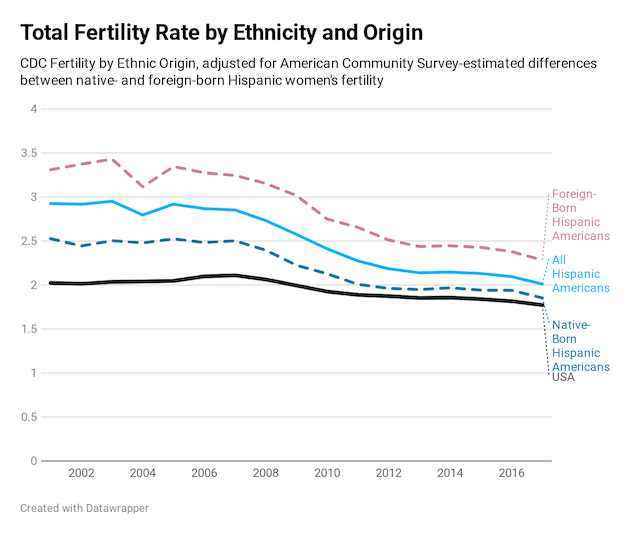 Foreign-born Hispanic women have had higher birth rates than native-born Hispanic women throughout the whole period for which we have data, and birth rates have fallen for both groups of women: by 26% for native-born women 2007-2017, and by 30% for foreign-born women. The result is that the Hispanic population is growing much slower than would have been expected a decade ago, which helps explain why the Census Bureau’s racial and ethnic population estimate revisions have been getting “whiter” in recent years.

What’s driving this decline in fertility rates? One factor may be changing fertility norms in countries of origin. Comparing fertility of Hispanic women in America to women in Mexico is informative. 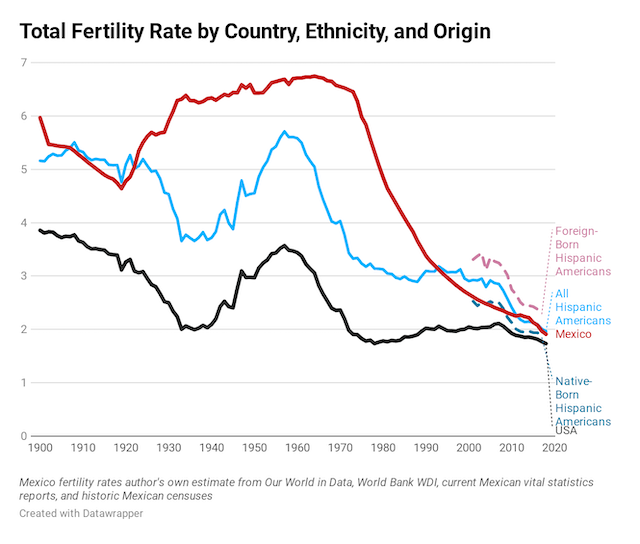 Fertility rates in Mexico have fallen dramatically. As of 2018, they are probably below replacement rate. That’s right: women in Mexico are now having less than 2 children each, suggesting that Mexico’s population will eventually begin to decline. Given that Mexico doesn’t receive as much immigration as the United States and given challenges to life expectancy in Mexico due to the drug war, Mexico could enter a period of dramatic population decline by the mid-21st century.

In the past, immigrants to America had high birth rates. That’s increasingly no longer the case. 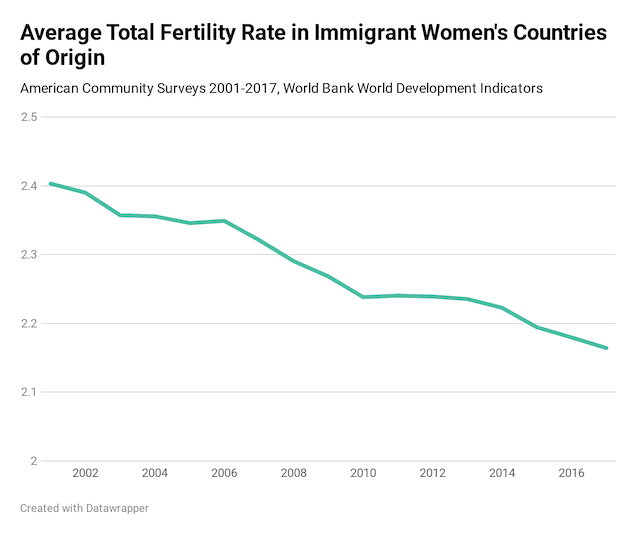 In 2001, the average immigrant woman was coming from a country where she could have expected to have 2.4 kids. By 2017, that value had fallen to just 2.16. Because many of these countries have higher death rates, this value is basically at replacement rate. In other words, the average woman who migrates to America is coming here from a country with near-replacement rate fertility or even below-replacement rate fertility. This trend will continue. And of course, as birth rates fall in these countries, they will have fewer immigrants to send, resulting in declining total immigration to the United States.

This has a strange implication. It turns out, the progressive critique of pro-natalism is wrong on an extra, unanticipated basis: immigration and fertility really aren’t substitutes, because the fertility rate of immigrants is falling just as fast or faster than American fertility rates. Future immigrants will have even lower birth rates, thus yielding smaller increases in long-run population. The paradoxical result of this is that future immigration will have less impact on the racial and ethnic mix of the country than past immigration!

In other words, falling fertility at home and abroad means that not only is pro-natalism not racist (plausible scenarios for higher birth rates have virtually no net effect on the racial mix of the population), but even higher levels of immigration won’t impact future racial demography as much as past immigration did. The world of demography is not as progressives imagine it: babies add diversity, and while immigration does too, it doesn’t add as much as it did in the past.