An Update on the Changing Face of Adoption

In a previous IFS research brief, I reported that the racial and ethnic composition of the adopted child population of the U.S. had changed dramatically in less than a generation. A new analysis of more extensive survey data1 confirms, extends, and partly corrects the trends described in the earlier report. The new evidence, depicted in the figure below, shows that over the 20-year period between 1996 and 2016, the proportion of adopted children who were white fell from nearly two-thirds to less than half. 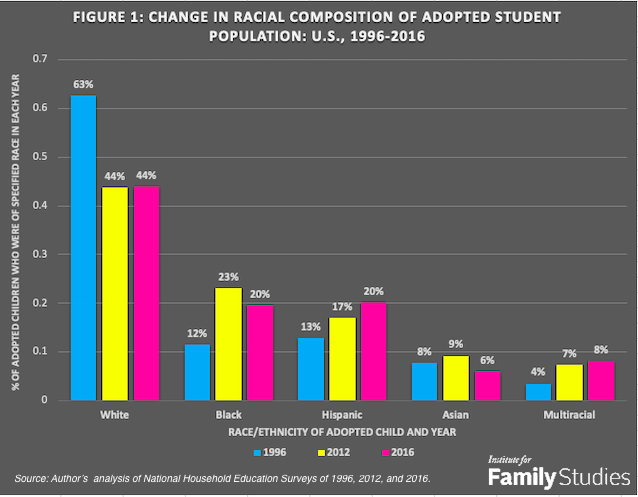 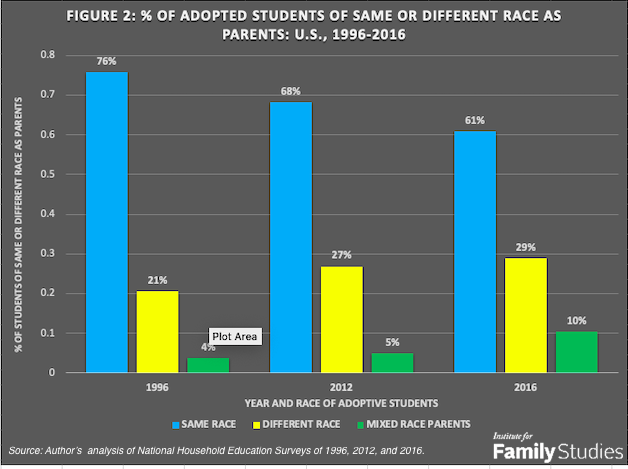 There are several reasons why these changes have occurred. There continues to be a strong demand for adoptable infants because many couples, especially college-educated ones, have put off trying to have children until their late 30s or early 40s. Some then have difficulty becoming pregnant due to declines in fecundity with age.4 Unable to have children of their own, they turn to adoption as an alternative route to parenthood.5

Meanwhile, the supply of adoptable infants within the U.S. has diminished because of more widespread contraception and readily available abortion among unmarried teenagers and young adults. Between 1990 and 2018, the annual number of births to teenagers in the U.S. dropped by two-thirds, while the teen birth rate dropped by 71 percent.6 However, there are still ample numbers of children in foster care who are available for adoption (almost 125,000 in 2019).7 These children face a more difficult road to adoption, being older (a median age of 8) and often having histories of parental neglect or abuse, drug or alcohol involvement, or mental illness. Despite these challenges, between 51,000 and 66,000 children were adopted from foster care annually during the last decade. Black and multiracial children are overrepresented among youngsters adopted from foster care.8

Some couples and single adults wishing to adopt turn to children from other countries who are in need of permanent homes.9 The availability of adoptable infants from specific countries has varied with changes in some nations’ policies regarding fertility regulation (e.g., China, which discontinued its one-child per couple restriction10 and foreign adoption (e.g., Russia, which stopped allowing adoptions of Russian children by Americans.11 Although international adoptions are not necessarily or intentionally interracial, they often turn out that way, as when white American couples adopt children from South Korea, Nigeria, or Colombia.12 The proportion of adopted students who were born in another country fluctuated between 14% and 18% across the three NHES datasets with year-to-year differences not being statistically reliable. The racial composition of foreign-born adopted students in the 2012 and 2016 surveys combined may be seen in Figure 3. Asian children made up the largest group of adopted students, followed by Hispanic, white, and Black students. 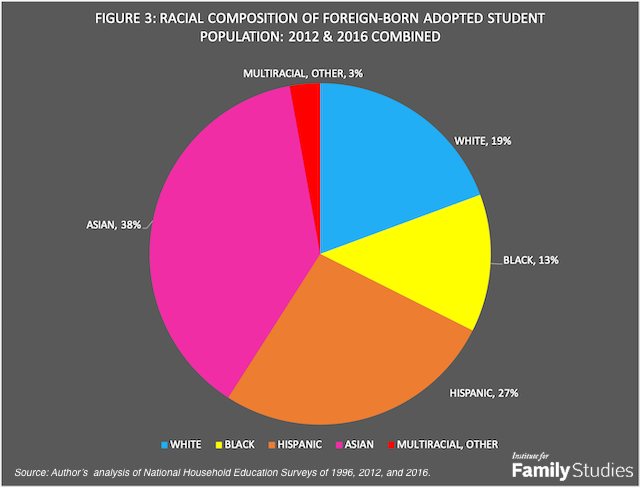 I conclude this update by reiterating statements I made at the end of the earlier research brief, which continue to be appropriate today:

In its current state, adoption helps many childless couples fulfill their parental ambitions and gives many abandoned children the opportunity to be reared in stable, supportive, and financially secure homes. As the data in this research brief shows, adoption is also helping to make the U.S. a more global society, increasing ethnic diversity, and broadening the definition of what it means to be a family. But there are still many children right here in the U.S., such as those in the foster-care system, who might benefit from adoption and are currently being left out of the process. And there are certainly ways in which adoption practices could be improved to better inform and prepare prospective parents to make a lifelong commitment to a child in need of a loving and stable family.