Who Are the Men Without Sex?

The “sex drought” is back in the news. The release of a new wave of the General Social Survey in March brought with it the revelation that the proportion of Americans self-reporting no sex in the past year continues to climb, hitting 23% in 2018.

Much of this decline is due to America’s greying population: older people have less sex, and there are more old people today than in years past. But a great deal of debate has centered around the role that young people play in the drop: 18% of 18-to-34-year-olds were not having sex in 2018, compared to just 7% as recently as 2008. This rise appears to be driven by young men. 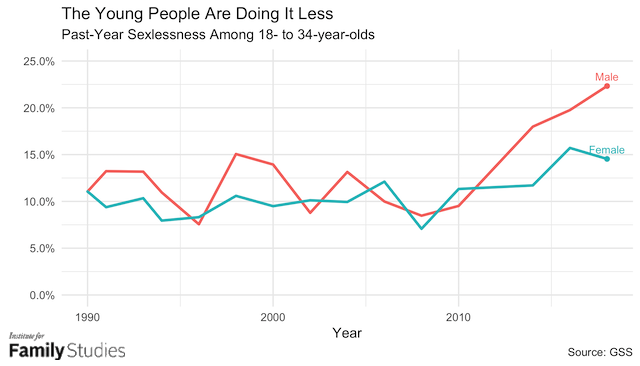 IFS fellow Lyman Stone has replicated this finding with two other major surveys, albeit with different timing, such that in the aggregate it appears as a slow increase rather than a sudden jump. It’s reasonable to assume, then, that lots of young American men are not having sex. The obvious question is: why?

Answers have tended to focus on issues of the moment. Psychologist Jean Twenge pointed to rising screen use and an increase in living at home; New York Times columnist Michelle Goldberg intimated that it was thanks to greater sexual agency among young women thanks to #MeToo.

With limited data, it’s hard to confirm these claims. But we can ask a related question: who are the young men currently not having sex? We can turn back to the GSS to answer this. Every survey period since 1989, it has asked respondents, “about how often did you have sex during the last 12 months?” (What “sex” means is left undefined.)

Statistically meaningful comparison over time becomes challenging with very subdivided groups, so I did not look at how these data have changed survey-to-survey. But, by combining surveys that cover the “sex drop,” we can get a picture of who the sexless young men are.

The obvious place to start is with demographics. Men who did and did not have sex in the past year look approximately the same in terms of race and Hispanic identity. Hispanic men and “other” men (the language used in the GSS’s race question) were slightly overrepresented among men without sex, although that may just be a fluke. 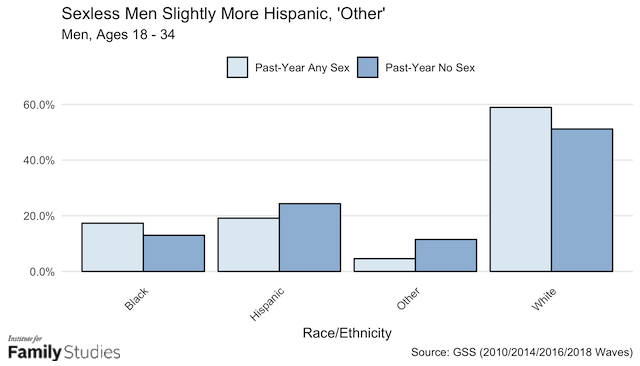 There is similarly not a huge difference when it comes to the highest achieved degree, as the figure below illustrates. (I’ve here omitted individuals who describe themselves as in school.) Men who had no sex in the past year are slightly more likely to have some college or a college/graduate degree. But the size of the difference between groups is not pronounced. 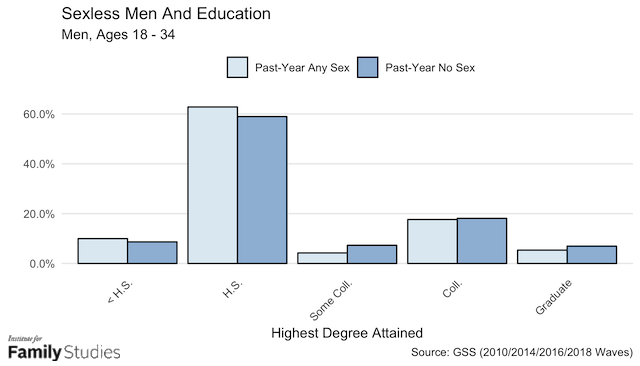 Does this mean that the sex decline is across socio-economic groups, or that higher-status men are having less sex? Sort of, but the full story is more complicated. We can look first at men’s labor force status, i.e. whether they were employed, unemployed, or not in the labor force altogether. 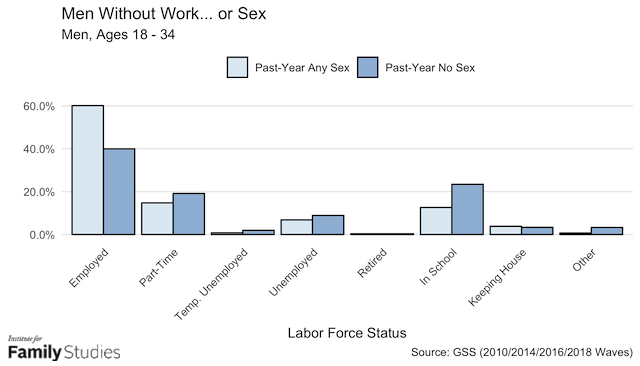 Sexless men are notably more likely to not be employed, either because a) they are part-time or unemployed or b) they are in school. A degree may not determine sexual activity but being a student does—and contrary to popular belief, it means a greater likelihood of sexlessness (at least for men). After you get the degree, though, having a steady job is clearly linked to being more sexually active.

The other socio-economic fact: among employed respondents, low earning is linked to sexlessness. 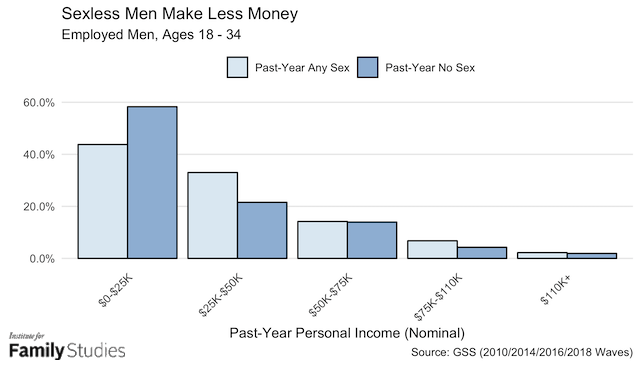 From all of this, we can glean that the sexless men are predominantly either a) students, b) unemployed, or c) partially-employed and/or low-earners. But, as the figure below shows, one factor stands out as an even more pronounced between-groups difference. 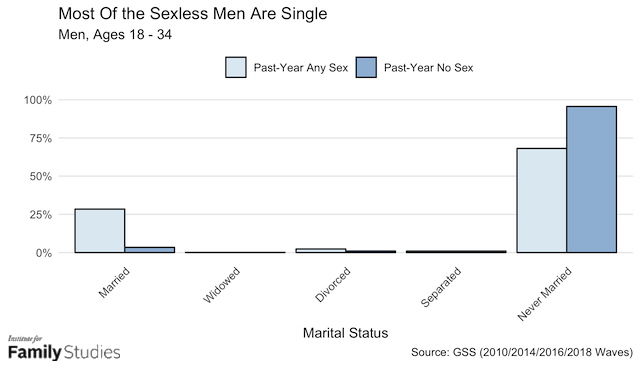 Sexless young men are substantially more likely to classify themselves as “never married,” and less likely to be married, than their sex-having peers. As I and others have argued, the single biggest driver of the sex drop, in general, is the retreat from marriage—a stable partner is the best guarantee of regular sex.

As much is supported by a closer look at the data I’ve used here. Regressing all of these variables (as well as year and age) against past-year sexlessness, the most statistically significant outcome (p < 0.001) is having never been married. The only other categorical variables that are notably significant (p < 0.05) are being unemployed and divorced. In other words, sexlessness is likely mostly about being unmarried (the latter especially explains all the sexless students), with unemployment as a compounding factor.1

A simplified interpretation of the preceding finding is that not having sex predominates among low-status men: the poor, unemployed, and students. An increase in sexlessness reflects a shift of young men into that group—for example, a declining male labor force participation rate.

Adding marriage allows us to nuance this interpretation. As Richard Reeves and others have noted, the decline of marriage did not happen equally across socioeconomic groups—higher-status groups preserve marriage rates similar to—if slightly less than—those of 50 years ago. Sexlessness is largely explained by being unmarried, but it’s much harder for men to get married if they’re unemployed or low-earning. Thus, the sex drop is an issue of marriage inequity.

There’s a separate story that dovetails with this one, but it is more specific to the 18-to-34-year-old demographic and may also help explain why college students and young men with advanced degrees are not having as much sex as they used to. Millennials are opting to delay marriage later and later, reframing it as a “capstone” accomplishment rather than a “cornerstone” of a stable (sex) life.

This pickiness is revealed, for example, in declining divorce rates among the 18-to-34-year-old cohort. Sociologist Philip Cohen has argued that this decline reflects an “increasingly selective nature” to marriage, which creates greater stability, but also makes marriage an “increasingly central component of the structure of social inequality.”

Young men’s sexlessness is mostly about access to marriage, and secondarily about economic disadvantage. But increasingly, these two go together. The “sex drought” is a marriage drought, and the marriage drought both reflects and perpetuates deeper issues of inequality.

Number 8 in 2021: Boys Are Falling Farther and Farther Behind Their Sisters: Should We Care?