The State of Our Unions: Marriage Up Among Older Americans, Down Among the Younger

The share of married adults in the United States has remained about 50% for more than half a decade, despite a steady drop since the 1960s. But this overall pattern masks the diverging trends by age: Among those ages 18 to 64, the share of currently-married adults has decreased consistently, reaching a record low of 48.6% in 2016, when the most recent Census data was available.1 In contrast, the share among adults ages 65 and older has increased slightly over the past five decades. As a result, adults ages 65 and older became more likely than younger adults to be married in the mid-2000s, and in 2016, a majority of older adults were married. 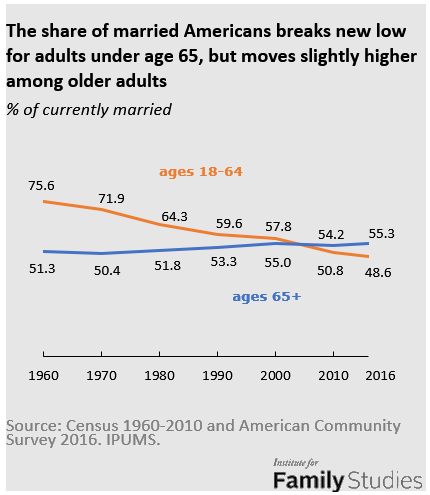 A few factors help to explain the different marriage trends experienced by younger and older adults. Americans are marrying later than ever, and more are living with a partner rather than getting married. And the share of never-married adults under age 65 has risen dramatically—from 26% in 1990 to 36% in 2016—which has directly contributed to the declining share of currently married among younger adults.

On the other hand, the higher proportion of married adults of retirement age today is largely due to a decline in the share of widowed adults, thanks mostly to the longer life of older men. Only less than a quarter of adults ages 65 and older (24%) are widowed today, compared with 35% in 1990. And among women ages 65 and older, the share of widowhood dropped from 50% in 1990 to 34% in 2016. Although the share of divorced or separated adults in this age group has more than doubled during the same period, it is still much smaller than that of widowed adults.

Related to the decline in widowhood, more older women today are married. For every 100 married men ages 65 and older, there are 80 married women of the same age. In 1960, the number was 64. This improvement in the gender ratio is even more dramatic among those ages 75 and older. The number of married women per 100 married men in this age group has increased from 48 to 68 since 1960. 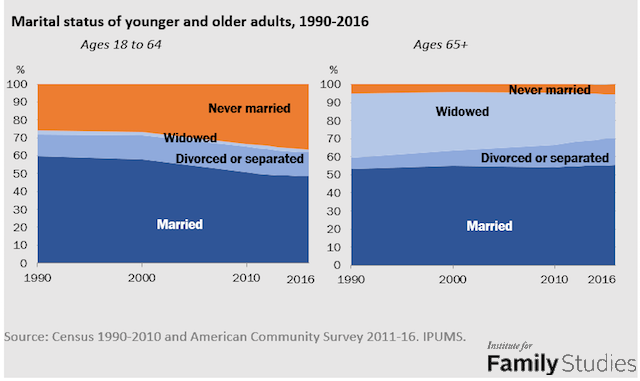 Other key findings from this IFS research brief include:

The Decline of Marriage Among Adults Ages 18 to 64

The shrinking share of married adults under age 65 has occurred across all demographic groups and is most significant among young adults. Only 26% of adults under age 35 were married in 2016, compared with 44% in 1990. Middle-aged adults are much more likely to be married than younger adults. However, even among those ages 35 to 64, the share of currently married is down by about 10 percentage points since 1990. 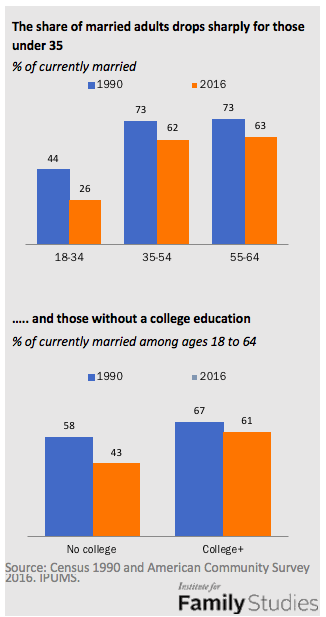 All major racial and ethnic groups have experienced a decline in marriage. The share of currently-married adults under age 65 dropped about 10 percentage points for whites, blacks, and Hispanics since 1990. For Asians, the drop was 3 percentage points. In 2016, more than half of Asians (60%) and whites (53%) were married, compared with 45% of Hispanics and 29% of blacks.

Marriage is Rising Among Americans Ages 65+

Different from what we’ve seen among younger adults, adults ages 65 and older today are slightly more likely to be married than older adults a few decades ago. This change is largely due to a decline in the share of widowed adults over time. Those ages 75 and older benefit most from this trend: 39% were widowed in 2016, down from 53% in 1960. During the same period, the proportion of currently-married adults ages 75 and older has increased from 36% to 45%. 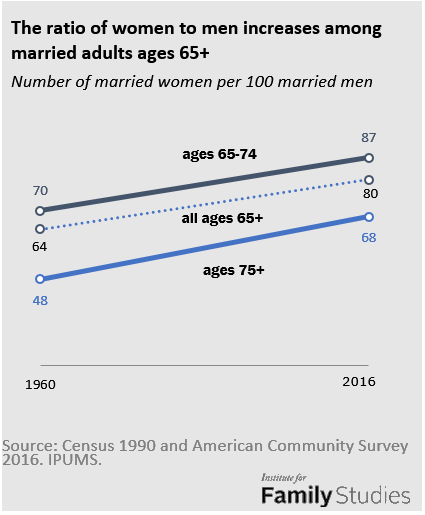 Older men used to outnumber women by a large margin among married adults ages 65 and older. With the decline of widowed adults, especially among women, this gender marriage gap has been shrinking over time.

New Marriages Are On the Rise 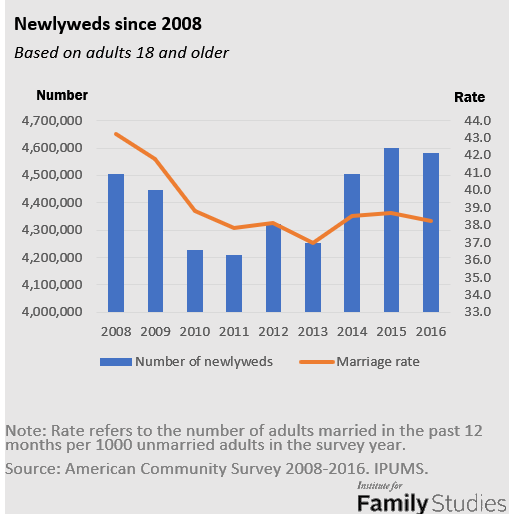 Although a smaller share of adults is married today, among those who are married, the good news is that their likelihood of divorce is also lower. After increasing between 2009 to 2012, the number of new divorcees has dropped every year, reaching a record low of 2.1 million in 2016. The divorce rate (measured by the number of adults who got a divorce in the past 12 months per 1,000 ever married adults) is also down from 14 to 12 per 1,000 ever-married adults during the same period. 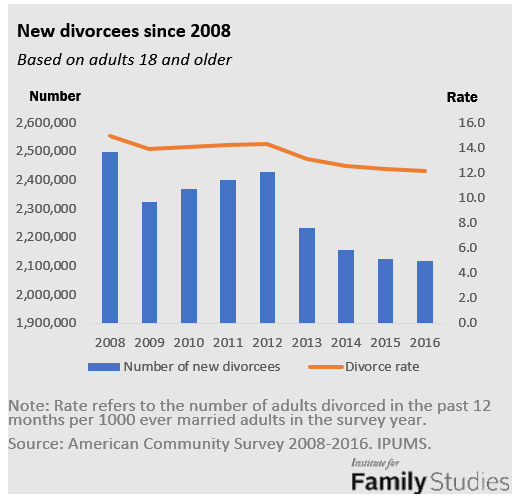 The divorce rate among those ages 65 and older has been stable in recent years, staying around 3 new divorcees per 1,000 ever-married adults each year since 2008. At the same time, the rise of so-called “gray divorce” among those ages 50 and older seems to have leveled off: the divorce rate among this group has been around 7 per 1,000 ever-married adults in the past 8 years.

The short-term fluctuation in the number of new marriages and divorces is closely related to changes in the economy and other factors. In the long run, with the passing of older generations, we are heading to an age when marriage will no longer be the institution that a majority of adults live in. Even so, marriage remains the norm for those with a college education. And for those who are married, their chance of divorce is lower. The gap between married adults and those who are not married, aligning with the class divide in the U.S., is likely to deepen in the near future.