The Power of a Dad, a Kid, and a Game of Catch

by Kevin E. Stuart
Back to Blog

Editor’s Note: This week, while our editor is on vacation, we are reposting some old blog favorites. The following post originally appeared on December 15, 2016.

This one is for all the dads out there. If you’re looking for the perfect gift for your kid, consider a baseball glove. It’s an old-fashioned gift, sure, but recent research shows that whether boys play baseball (and girls play softball) depends heavily on you. In fact, one of the stunning findings in the Austin Institute for the Study of Family and Culture’s report Called Out at Home is this: Major League Baseball players are almost twice as likely as the rest of the population to come from homes where their father is present.

This effect is seen in a most profound way by looking at the history of African Americans in Major League Baseball. When the new baseball season begins in the spring of 2017, it will have been 70 years since Jackie Robinson broke the color barrier by becoming the first black player in Major League Baseball. Twelve years later, in 1959, Pumpsie Green was invited to the Boston Red Sox spring training camp and soon became the first black player on the last team without an African American on the roster. From 1947 to 1981, African American representation in the big leagues skyrocketed from 0 percent to over 18 percent of all players, well above the African American percentage of the population at large. Then something strange happened: the numbers began to drop. 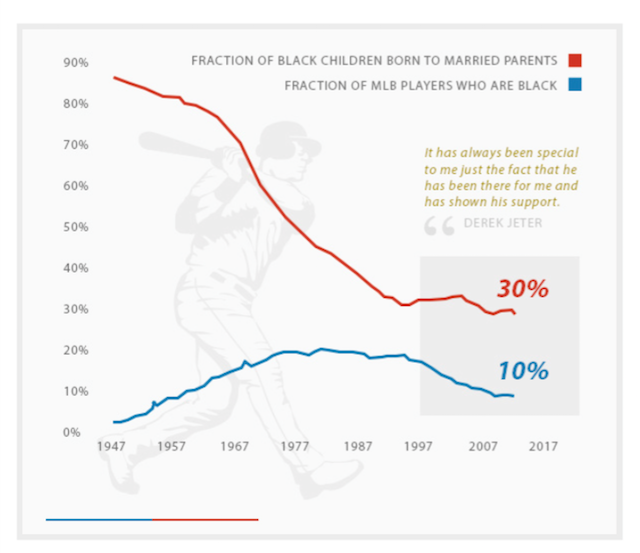 That’s the question researchers at the Austin Institute set out to answer. Like many complex social phenomena, there are undoubtedly multiple causes. It’s rarely just one thing that causes a change that large—it’s usually lots of things working together. But what the Austin Institute discovered is that one of the most important factors, entirely ignored until now, is the special role fathers have in the lives of their children and how the dramatic drop in African American players in pro baseball revealed a hidden facet of that relationship.

What stood out to the researchers initially was the timing of the decline—about 20 years after a similarly steep decline in marital births. The first step in data analysis was comparing nationwide birth data at the county level and to a database of about 85,000 college and professional baseball players (including information about the year and county where they were born). The data showed that as out-of-wedlock births go up in a county, the future production of baseball players goes down.

Researchers then played the devil’s advocate. They took a sample of over 600 current Major League Baseball players, approximately 20 from each team, and researched their family structure. Nearly 80 percent of African American professional players come from a home where their father was present, compared to about 40 percent of African Americans in the general population.

Additionally, the presence of a father even predicts which sports kids will play in high school (see figure below). Looking at AddHealth, a large national data set with information on kids and high school sports, researchers found that children are about 25 percent more likely to play baseball when they live with their father, a finding that holds for both boys (baseball) and girls (softball). In more detail, about 20 percent of youth living with their father report playing baseball compared to only 16 percent of youth not living with their father. By contrast, the same data set shows that high school students living with their father are actually less likely to play basketball than are students without a father in the home. In other words, kids with fathers at home more often choose baseball (or softball), while kids without fathers at home more often choose basketball. 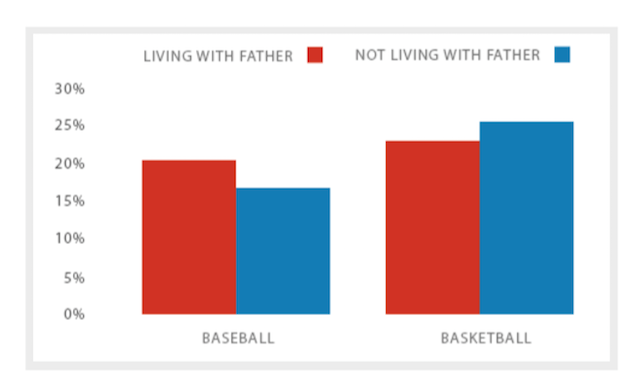 Some might be tempted to wave off the findings and say money and socioeconomic status have more to do with the trends we see. That’s not likely. At the same time that African American representation has been dropping, players hailing from the Dominican Republic and Venezuela, many of them having grown up in impoverished conditions, have dramatically increased.

What is more likely is this. Some sports require a great deal of institutional support in order to make great improvements in skills, e.g. football and lacrosse, which require lots of equipment and other people to practice and scrimmage. Others, such as basketball and track, require very little or even none. Kids can go to the nearest park by themselves and improve their skills at basketball and many track events. Baseball falls in between those two extremes. It doesn’t require a huge amount of equipment or people; just one committed person, a bat, a ball, and a couple of gloves will do. What the new research shows is that the best candidate to be that committed person is Dad.

Take Giancarlo Stanton, for example. He is in the second year of the largest contract in baseball history: $325 million for 13 years. Asked about his father, with whom he has a very close relationship, Stanton said,

Obviously, you feel your father in the stands, but I like to think that he still listens to the radio just like he did when he'd take me [to L.A. Dodgers games]. It's like I grew into the player he would take me to go see and watch.

More than just to help them become a great baseball player, children need a father to help them thrive. If the presence of a father has such a large effect on something as seemingly small as what high school sports kids choose, it stands to reason their impact on the life choices that matter most is profound. Children should have as many caring adults in their lives as they can, but our research affirms that parents—fathers in this case—have a special role. And maybe that fact—more than shaping a future pro player—is the real goal of an afternoon game of catch in the back yard.

Kevin E. Stuart, Ph.D., is executive director of the Austin Institute for the Study of Family & Culture in Austin, Texas.