Married Parenthood Remains the Best Path to a Stable Family

My friend Grace (not her real name) is a beautiful, smart, and driven young woman, who overcame a difficult childhood to be one of the first women in her family to graduate college. She has a good job and has been living with her long-term boyfriend for nearly a decade. Although she proudly wears the sparkling engagement ring he gave her a few years ago, they still haven’t set a wedding date. Lately, as she watches most of her friends getting married and starting families, Grace has been thinking more about having kids. She’s getting older and doesn’t want to run out of time, so while she’s not trying to get pregnant with her boyfriend, she is no longer trying to prevent it either. Grace is in a stable, cohabiting union with a long-time partner she plans to marry, so the possibility of getting pregnant before marriage doesn’t seem like a huge gamble to her.

With an estimated 70 percent of women today cohabiting with their husband prior to their first marriage in the U.S., Grace’s relationship status is certainly not uncommon, nor is her acceptance of unmarried parenthood. According to a 2016 National Center for Health Statistics report, 74.7 percent of American women and 75.9 percent of American men in 2011-13 agreed: “It is okay to have and raise children when the parents are living together but not married.”

If Grace does have a child before she walks down the aisle, she will be part of the increasing share of unmarried women who give birth while cohabiting. In fact, three out of five children born to unmarried women in recent years were born in a cohabiting union, according to new research from the National Center for Family & Marriage Research (NCFMR), which notes that “[t]he source of growth in nonmarital childbearing for most women is cohabitation.” 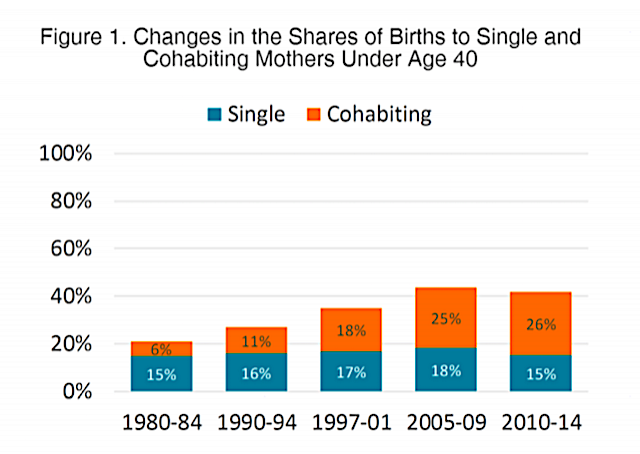 When it comes to mother’s education, this blog has documented that nonmarital births are more common among less educated women where marriage is in retreat than among the college educated who are more likely to marry and give birth in marriage. The NCFMR confirms that “the share of births to unmarried mothers with less than a high school education climbed to 70 percent in 2010-2014, whereas unmarried births account for only 12 percent of births to mothers with at least a Bachelor’s degree.”

Still, as the figure below indicates, nonmarital births have increased among women of all education levels since the 1980s—with one exception: among both single and cohabiting women with a high school diploma/GED, the share of births decreased between 2005-2009 and 2010-2014 (more so among single mothers).

Because my friend Grace is well educated and in a stable cohabiting union, some would argue that if she has a child outside of marriage, her child will fare better than a child born to a less educated cohabiting mother, and certainly better than if Grace were trying to raise a child alone. Even so, her future children would be best served if she and her partner delay getting pregnant until after they marry. That’s because, as the 2017 World Family Map shows, children born to cohabiting couples are about twice as likely to experience a parental breakup by age 12 as children born to married parents. This is true even for children born to more educated cohabiting mothers (see figure below for U.S. figures). 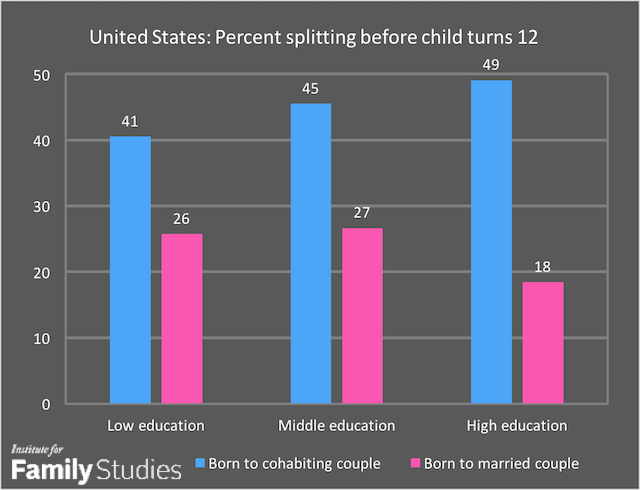 But what about cohabiting parents who get married following the birth of their child? As Laurie DeRose has reported, a 2014 study found that while biological parents who marry after giving birth enjoy more marital stability than step-father marriages, these unions still have a higher risk of breaking up. And according to a UK study, couples who married before a birth were significantly less likely to break up by the time their child turned 14 or 15 (24 percent divorced) compared to both couples who married after a birth (56 percent divorced) and cohabiting couples who gave birth but never married (69 percent split up).

In addition to being more likely to undergo a parental breakup and more family transitions as one or both parents re-partner, children born to cohabiting parents are also more likely to experience poverty, child abuse, and a host of other negative outcomes, compared to the children of married parents.

Grace probably doesn’t want my advice, but if she did, I’d urge her to heed the social science evidence and delay having a child with her partner until after they are married. Of course, marriage does not guarantee that a child’s parents will stay together. But, as W. Bradford Wilcox and Laurie DeRose put it in a recent essay, “marriage comes with a substantial stability premium for children.” Despite the increasing prevalence of cohabitation, it still can’t compete with marriage when it comes to creating the most stable family environment for children.