Put Marriage Before the Baby Carriage: Evidence from the UK

Ever since the cohabitation boom took off in the 1980s, people have become a lot more relaxed about whether or not it is best to marry before having children. In 1989, three-quarters of the British public said people who want children should get married. By 2012, this had dropped to less than half. Our attitudes to marriage have reflected the trend away from marriage.

But does this shift in opinion fit with the evidence? Or is it more a case of going with the flow and not wishing to judge?

Marriage Foundation recently published the first-ever UK analysis of who stays together and who splits up among couples who marry before having children, those who marry afterward, and those who don’t marry at all. It seems amazing that this hasn’t been done before (so far as I know), other than one study from 1999 that only covered the first five years of parenthood.

Together with Professor Steve McKay at the University of Lincoln, we analyzed data from Britain’s largest household survey, Understanding Society. We looked at 1,783 mothers with children aged 14 or 15 who were surveyed in the years 2009 or 2010. We divided them into three categories—married then birth, birth then married, never-married—leaving out the single mothers who had no ongoing relationship with the child’s father from birth onwards. We then looked at which couples stayed together and which did not. We also looked at mothers’ age and whether or not they had a university degree.

The proportion of mothers who married before having kids but divorced by the time their child was a teen was 24 percent. Mothers with a degree did even better, with just 18 percent splitting up. Of those who had a child together and subsequently married, 56 percent went on to divorce. This was a new and surprising finding, being much higher than expected. Couples who had a child together but never married fared worst: 69 percent split up by the time their child was fourteen or fifteen. This was another new finding, confirming what models had predicted but no study has ever shown conclusively. 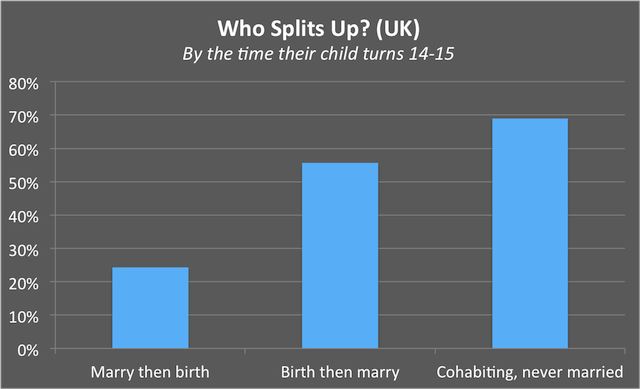 The full report gives a lot more detail on this if you want it. Suffice to say we found several other interesting new findings: 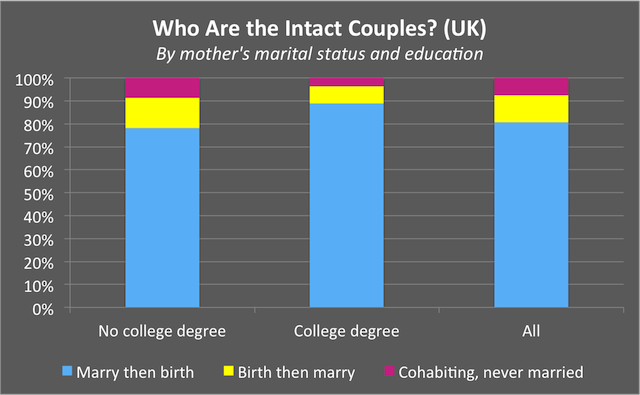 The bottom line of our analysis was that couples who marry before having a child have the best chance of staying together. Couples who get married after a child is born have a risk of break-up one-fifth lower than those who don’t marry. Yet the majority of couples who are committed enough to get married at some point after their child is born will have given up on their promise by the time their child is fifteen. Not marrying at all is by far the riskiest option. Fewer than a third of couples who don’t formalize their commitment by getting married will stay together throughout their child’s upbringing.

All of which evidence shows that the dwindling, yet significant, minority of the British public who still think it best to marry before having a child … are right.