A new report from the National Center for Health Statistics (NCHS) reveals that support for divorce is declining among Americans, even as we increasingly embrace relationship forms that are less stable than marriage. The report highlights findings from the National Survey of Family Growth (NSFG) on 15- to 44-year-old Americans’ attitudes about marriage, childbearing, and sexual behavior for the years 2002, 2006-10, and 2011-13.

Overall, the data reflect increasing approval of recent shifts in family structure away from marriage, especially the rise of premarital cohabitation and unmarried parenthood. But one positive trend is a significant decline in the acceptance of divorce among both men and women.

Divorce: According to the NCHS, the percentage of men and women who agree that “Divorce is usually the best solution when a couple can’t seem to work out their marriage problems” has declined since 2002. Among women, 46.7 percent agreed with that statement in 2002, a figure that had fallen to 38.0 percent in 2011-13. Similarly, the percentage of men who agreed with the statement declined from 44.3 percent in 2002 to 39.3 percent in 2011-13. 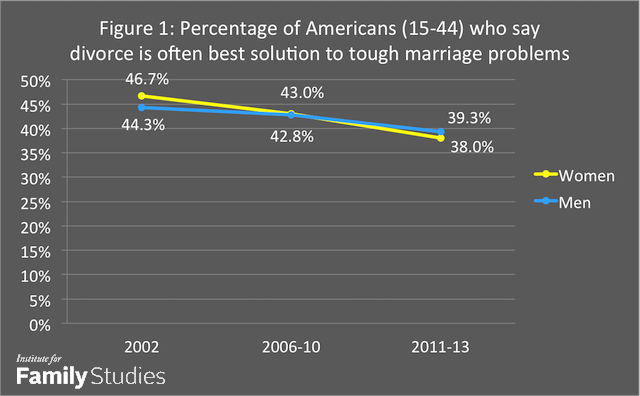 Cohabitation: While Americans may be less tolerant of divorce, the NCHS study also found increasing support for cohabitation, which is not a huge surprise since over half of men and women report having cohabited at some point. Specifically, the NSFG data reveal a decrease in the percentage of men and women who agree that, “A young couple should not live together unless they are married.” The percentage of women who agreed with this statement dropped from 34.7 percent in 2002 to 28.0 percent in 2011–2013. Among men, it dropped from 32.0 percent to 24.8 percent in the same timeframe. 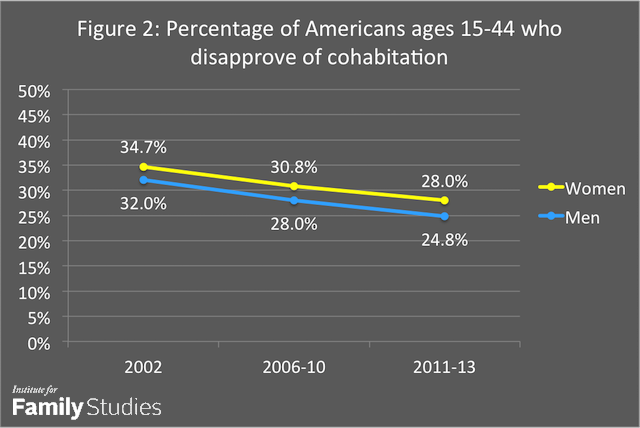 Though it might seem counterintuitive, the increasing acceptance of cohabitation may be related to the decreasing support for divorce. Per the same survey, two-thirds of women and men accept one of the most common myths about cohabitation today—that living together might help people avoid a divorce. According to the NCHS report, 60 percent of women and 67 percent of men in 2011-13 agreed that “Living together before marriage may help prevent divorce,” a similar percentage as in 2006-10.

Unfortunately, the belief that cohabiting is beneficial for marriage does not square with research on cohabitation, marital quality, and divorce. As IFS Senior Fellow Scott Stanley has explained here, cohabiting does not lead to marriage for most couples, and tends to bring more risks than benefits for couples who do marry. For example, having lived with more than one romantic partner before marriage is linked to a substantially higher divorce risk, and moving in together without being engaged first or without clear intentions to marry is associated with poorer-quality marriages.

In a related finding, the NCHS report shows that three-quarters of Americans agree that cohabiting with children is acceptable. Specifically, 74.7 percent of women and 75.9 percent of men in 2011-13 affirmed that, “It is okay to have and raise children when the parents are living together but not married.”

Again, this finding makes sense, considering the growing number of children being raised by cohabiting parents. By age 12, in fact, 40 percent of children will spend some time in a cohabiting household, according to recent estimates.

Single Motherhood: The NCHS report also found overwhelming support among both men and women for the statement: “It is okay for an unmarried female to have and raise a child.”1 Among women, the percentage who agreed with unmarried motherhood increased from 69.5 percent in 2002 to 78.3 percent in 2011–13. Among men, agreement rose from 58.9 percent to 69.2 percent.

These findings are consistent with the increase in nonmarital births and the growing number of children raised by single (sometimes cohabiting) moms. In 2014, births to unmarried women accounted for 40.2 percent of all births, according to the CDC. Additionally, 2014 Census Bureau data shows that over one-quarter of American children today live in single-parent families, the vast majority with their moms.

Still, the overwhelming acceptance of unmarried motherhood is troubling in light of the well-established risks faced by single moms and their children. In addition to experiencing the highest rates of poverty, children in single-mother households face a heightened likelihood of various negative life outcomes, including abuse and neglect, cognitive and behavioral problems, and poor health.

The NCHS report raises an important question: why are Americans becoming more cautious about divorce, but at the same time more supportive of nonmarital relationships? While there are likely many factors at play, perhaps one reason is that more of us have grown up in broken homes. According to the 2014 General Social Survey, 41 percent of Americans aged 18 to 50 were raised in non-intact families, as the chart below illustrates. Having experienced the consequences of family breakdown as children, is it any wonder more Americans abhor divorce, and delay or avoid marriage because they fear it? 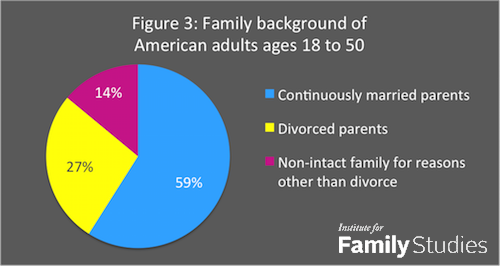 Wariness about marriage and divorce is something IFS Research Fellows Amber and David Lapp believe is prevalent among young, working-class Americans, many of whom were raised in broken families. “When it comes to marriage, what we heard over and over again [from our interviewees] was anxiety about the prospect of divorce,” they write. “Anyone who wants to understand how many young adults are thinking about marriage must grapple with the anxious legacy of divorce.” Similarly, in a recent article, W. Bradford Wilcox, Nicholas Wolfinger, and Charles Stokes cited the increasing number of children raised in non-intact families who are “pessimistic about their own prospects for a lasting marriage” as one of five cultural factors that help explain the nation’s declining marriage rates.

That more Americans are rejecting the notion of divorce as the best solution for a troubled marriage is a welcome trend that is likely driven, at least in part, by a divorce revolution that left many of us determined to fight for our own marriages. But if we are growing less likely to consider marriage the first and best place to form families, we will be less equipped to create the stable families we desire. It is not enough to merely view divorce as a negative option, if we are making relationship choices on the way to the altar that lower our chances of having a lasting marriage and undermine the well-being of children. The increasing support for cohabitation and unmarried parenthood are trends that need to be reversed if we hope to rebuild a culture where marriage and families can thrive.